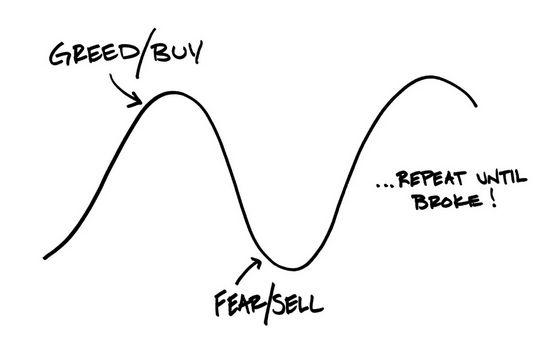 One of those timeless clichés that we see play out time and again.

Shout out to Macrodesiac partner Syscoin, going from strength to strength. Now listed on KuCoin & on Huobi! 👇

The greedy worm has definitely turned, as we're seeing with deep sell-offs across risk markets. And there's little respite.

Peloton's stock price has been smacked down again (-24.5% pre-market) after the earnings miss earlier today.

Peloton's now down 91.78% from the highs... Too much inventory and too few new customers still the big problem 👇

Stabilizing the cash flow has been an exercise in balance sheet and P&L management. The balance sheet challenge has been managing inventory. We have too much for the current run rate of the business, and that inventory has consumed an enormous amount of cash, more than we expected, which has caused us to rethink our capital structure (more on this in a moment).

Fortunately, the obsolescence risk is negligible, and we believe the inventory will sell eventually, so this is primarily a cash flow timing issue, not a structural issue

Peloton's not really a great proxy for fear though. The company benefitted from everyone being locked in their homes, and (to me at least) it feels like the whole ipad on a bike thing's done now.

They probably get bought out by a metaverse company in the next cycle and we'll end up racing each other along a virtual great wall of China on the next bull run.

So, where will the fear shine brightest? And WHEN?

We're not there yet. It'd be no surprise to see a post CPI relief rally tomorrow, maybe even a Turnaround Tuesday today, but hitting peak inflation doesn't fix the problems. We've been chatting about this with Macrodesiacs.

Supply chains, profit margins, consumer trends and credit spreads are all key metrics to monitor, as is the health of the top guns in the indices.

In FX, sentiment has shifted heavily in favour of the the dollar

And with good reason. We're in the top section of the dollar smile whichever way you slice it. US growth has been outperforming, and will probably continue to do so, or global growth concerns take priority. 👇

The dollar was problematically weak just 15 short months ago. EURUSD was heading to $1.25, and the yen was attracting attention of Japanese officials for being too strong (which seems laughable now).

Strategists say Europe’s shared currency is heading toward $1.25, a level it hasn’t traded above consistently in over six years, with the European Central Bank proving willing to verbally bat down forays higher.
The yen, meanwhile, is already drawing the attention of Japanese officials after it hit a nine-month high, and traders may yet target its strongest since 2016."

The moves are testament to the sweeping influence of the dollar, whose descent has already driven China’s yuan past a key threshold, to the discomfort of policymakers there.

Fast-forward to the present day...

In October, BlackRock’s strategists turned “modestly positive” on China and upgraded their ratings on the country’s stocks to “overweight,” saying a gradual dovish shift in monetary and fiscal policy to counter the economic slowdown would help lift the market. They had expected that the regulatory clampdown in China would become less intense.

Instead, the MSCI China Index has lost 28% since the beginning of October

Spending is strong, but the consumer's feeling the pinch now. And here come the layoffs...

Coinbase has "no risk of bankruptcy" so please don't worry. In any case, trader/investor protection has limits.