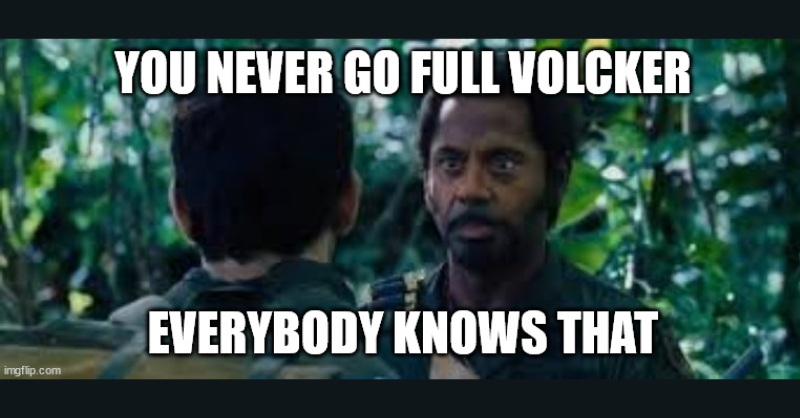 You might have heard. The Fed's going Full Volcker... 👇

If the Fed Whisperer says so, then it must be true right? Nah. We're a long way from Volcker and the story's a remix of stuff that's common knowledge 👇

Fed officials thought investors were misreading their intentions given the need to slow the economy to combat high inflation. In a widely anticipated speech, Chairman Jerome Powell decided to be blunt.

He scrapped his original address, according to two people who spoke to him, and instead delivered unusually brief remarks with a simple message—the Fed would accept a recession as the price of fighting inflation.

We wrote about that speech for Capital here 👇

This time, he was a man on a mission. One of the shortest speeches at any Jackson Hole event, no straying from the point, nothing to misinterpret.
No Q&A. He delivered his message and left the stage. The resolve was unquestionable.

As speeches go, it was a communication masterpiece.

Credit where it's due. Powell nailed it.

In case the audience was in any doubt, the Fed Chair led with the key message:

“The Federal Open Market Committee's (FOMC) overarching focus right now is to bring inflation back down to our 2 percent goal. Price stability is the responsibility of the Federal Reserve and serves as the bedrock of our economy.”

Once again, nothing new in these words, but the position of the message at the start of the speech is significant. The Fed Chair then proceeded to tear down the structure supporting the pivot narrative: “The Fed will pivot as soon as the economy slows”. Nope. He told the people to prepare for pain (but it’ll be the lesser of two evils)

Nothing's really changed since. Inflation's still too high. Labour markets are still strong. All of those things the Fed's looking at are flat or going the wrong way.

It's (still) way too early for the Fed pivot. However, the bar to surprise markets is much higher. The 6 month to 3 year tenors have all converged around 4%. 👇

And is the Fed really in the driving seat? After the Jackson Hole speech (killing premature hopes of a premature pivot) rates drifted higher within a stable uptrend, but the CPI release is clearly visible as the main impact event. Rates stepped higher. Far more significant than the Jackson Hole Drift 👇

So, one of the big questions for today's meeting is how much further does the Fed think rates will go...?

And the meta-question: Will the market believe them?

The quarterly projections (SEP) will be released. In the run up to the June meeting (when the last set of projections were published), markets priced a peak/terminal rate of 4% in June 2023 with around 60bps of cuts by December 2024.

Subsequently, rates futures fell sharply & financial conditions loosened. Exactly the opposite of what the financial overlords wanted to see. The story goes that it was this market reaction that made them hawk it up in the follow-up speeches, culminating in Powell's Jackson Hole knockout punch.

The last thing the Fed wants to see is a repeat performance. So how can they avoid one and keep everyone worried?

Let's presume they hike by 75bps. That's expected. It's the minimum bar. Hiking by 50 won't cut it and a 100bps hike would likely scare the market.

Some might say that's great, just the shock therapy that markets need. But they're already ultra-aggressive. Why take the risk of a further shock and unintended consequences? Hiking by 75 is enough to get the job done at this meeting.
If you disagree, you know what to do 👇

Remember, the Fed is now data dependent and not giving any forward guidance.

Except the dot plot and the economic projections, where Fed members have a guess at where unemployment, inflation, the economy and rates will be over different time horizons. And the constant speeches.

Anyway, those rate guesses get turned into a weird-looking chart like this 👇

That's genuinely how they make the dot plots. They all get on the pints together, stick a bit of paper to the wall and chuck darts at it.

I can feel you doubting me, but why else would it be a two day meeting? They could do it in two hours. And Powell's always got that suspicious cough in the presser too... 🤨

Each hole in the paper represents a dot, then they drag the interns out of the basement to digitise it and make it look respectable ready for public release.

Seriously now, as forecasts the dots are basically worthless. Back in June last year the majority saw no hikes in 2022. Now we're looking at 4% by December. 👇

Mainly, if the market believes the Fed or not.

The Fed presents their projections: "Here's what we think will happen"

The market responds by saying "that's reasonable" (pricing doesn't change much) or....

And then cracks on with efficiently repricing based on the collective insight of highly intelligent market participants.

Any dots above 4.5% would be a belief test for the market. So far, the Fed has telegraphed a fast hiking cycle followed by a pause, likely to hold throughout 2023. Fed fund futures are pricing about 35bps of cuts by December 2023, so they're not too far apart on this.

Any talk of a recession, a sharp rise in employment, or inflation returning to 2% earlier than expected could introduce doubt to this pricing. Likewise, any excess hawkishness could bring the credibility of the projections into question.

Turning away from the Fed, there are plenty of signs that things are cracking in the wider world.

You get the drift. None of this is enough for the Fed to signal anything close to 'job done', but things are getting tighter, effects are being felt, and any extreme hawkishness could send the market into full on defensive mode.

If the Fed wants to keep things tight without breaking anything big, they should stick to the script later today. No major shocks, no drama, just a determination to follow through until the job's done.

I can't shake the feeling that this meeting might mark the point when interest rates peak out regardless. The risks of being short 1-3 year US bonds outweigh the rewards to my eye. But it's just a feeling. Can't be trusted.

Especially when I'm in the majority on a FinTwit poll...

Everything will be published here as always 👇

And keep an eye out for QT commentary in the notes and press conference. If the Fed signals a peak in rates via the projections, they might want to keep the pressure on via other means.

By the end of September, the balance sheet should be quite a bit lower...

But low liquidity is a big problem that needs to be addressed. 👇

Markets go up and down, fortunes are made and lost. Everything is cyclical. King Charles says we need a bull market in critical thinking.

Cut corporate taxes, more money for the bankers, cut stamp duty to keep the property market propped up. What's Truss up to?