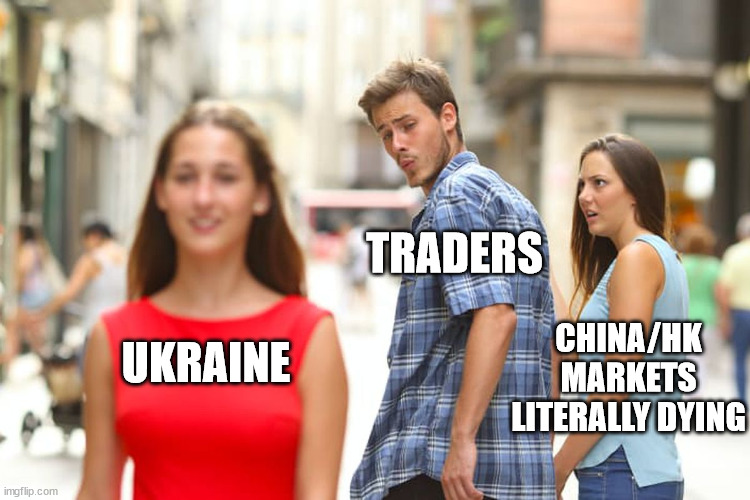 Before we get into today's piece, shout out to Macrodesiac partner Syscoin.

Let's take a look at the Hang Seng Index...

Find me a chart that looks worse than this. A complete capitulation from 25k to 19.5k. No respite at the Covid lows, this dip just kept on dipping.

The Hang Seng is now quietly down 22% in five weeks...

We talked about the Hang Seng (and relying too heavily on technical analysis) in today's vid. 👇

Back to China. The rumour mills are ramping up. Various media reports all quote multiple sources... There's more layoffs to come at tech giants Alibaba & Tencent.

Yilanshangye learned from several sources that Alibaba‘s MMC business unit is planning to sever ties with many employees, while the proportion of layoffs in this round will stand at roughly 20%.
At present, several business lines within the company have finalized their initial layoff list.

Everyone gets it wrong sometimes

Even Charlie Munger. Buffett's partner in crime is also chairman of the Daily Journal Corporation. Back in Arpil 2021 filings revealed that DJC had bought shares in Alibaba. At the time, it was the third largest position in their portfolio behind Bank of America & Wells Fargo.

As the share price dipped, they kept on buying...

This is how it was reported at the time...

The horizontal lines are the average purchase prices. Who taught who a lesson here?

It's really not looking pretty.

And regulators haven't finished with big tech firms yet... 👇

While everyone's declaring that China's about to take over the world because the US and Europe actually grew a pair and stood up to Russia...

We wrote about this for Macrodesiac Premium subscribers back in march 2021, long before the collapse happened.

Check out what we said about Evergrande then 👇

China's economy hasn't recovered from this. It's still playing out.

Country Garden (white) vs Evergrande. CG is China's 2nd largest developer. If Evergrande had issues, then so will CG.

Onto the chart. Where one leads...

The other (eventually) follows...

China's house price data on Wednesday should give more details...

Here's a good read on the possible outcomes for China from the Ukranian war.

From a Chinese perspective, this is the worst case scenario. 👇

Once Putin falls, the U.S. will no longer face two strategic competitors but only have to lock China in strategic containment.

China will not only be militarily encircled by the U.S., NATO, the QUAD, and AUKUS, but also be challenged by Western values and systems.

The author has a suggestion to avoid this:

China should avoid playing both sides in the same boat, give up being neutral, and choose the mainstream position in the world.

However, this position does not meet Russia’s needs, and it has infuriated Ukraine and its supporters as well as sympathizers, putting China on the wrong side of much of the world.

In some cases, apparent neutrality is a sensible choice, but it does not apply to this war, where China has nothing to gain.

This is mainly written from a perspective of how to best meet China's own interests.

Wednesday's meeting between Sullivan & Yang Jiechi will be one to watch on this score.

This week that's been billed as "all about central banks" could end up being "all about China".

Right, before we get into today's piece, shout out to Macrodesiac partner Syscoin.

War fatigue has set in for markets. Time to build those golden bridges before things get worse...