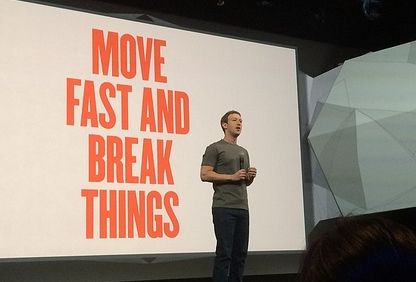 Move fast and break things was the Facebook mantra in the early days. As the company grew & embedded itself into every corner of the global economy, that approach caused a few issues.

"Move fast and break things" has come back to haunt Facebook/Meta over the years. As the company has faced wave after wave of scandals over privacy, misinformation, and harmful content, critics have held its original motto up as evidence of a tendency towards collateral damage

Collateral damage is something we're going to see a lot of judging by the latest market moves.

Not all collateral damage is bad. Some of this is just Schumpeter's creative destruction striking back...

"the process of industrial mutation that incessantly revolutionizes the economic structure from within, incessantly destroying the old one, incessantly creating a new one."

But it has to actually revolutionise...

Some people tried to claim that creating fake meat with a gazillion highly processed ingredients was innovation worth a market cap of $12bn... 👇

Not any more! And that's the kind of collateral damage we can all live with. Nobody really cares if Beyond Meat survives apart from the people that work there and a few evangelists that believe we can save the planet by going vegetarian.

ESG, & green activism more generally has been collateral damage of Putin's War™. BlackRock's crusade is over (for now) 👇

But that's not the collateral damage I'm really worried about. It's this kind of stuff that'll keep me up at night 👇

I haven't read the note, but I'd take a guess at what's in there.

Short version: the property market's imploding, they got old before they got rich, terrible demographics looking ahead, and the parallels to Japan's late '80s bust are too obvious to ignore. Right down to the soaring dollar (Plaza Accord) and inability to adjust their domestic economy despite knowing it needed to happen.

Then there's the tech side of the equation...

FED'S BULLARD: THE EFFECTS OF FED POLICY ARE BEING FELT QUICKLY IN FINANCIAL MARKETS

But it's not enough to slow them down. Financial markets and to some extent the economy are the collateral damage, the sacrificial lamb required to bring inflation down. Short term pain for long term economic prosperity and stability later. Hopefully. Maybe...

Killing the wealth effect and making people feel poorer is the fastest way to stop them from spending.

Higher interest rates kill tech stocks because they live on cheap debt and the ability to roll it cheaply.

It's time to talk about the end of the euro (again)

Now, we're all so used to how things in the eurozone kind of work. Everything sort of limps along, nobody gets what they really want, but it all just about holds together in every crunch moment.

Being outside of the euro seems unthinkable...

On to Russell Napier's article, and the question of rates...

Just how far can interest rates rise to tackle the high rates of inflation before they cause a debt crisis?

What about France though?

All quiet on that front, but could France and their enormous debtload be the catalyst hiding in plain sight?

Have a read of this excellent thread and see what you think... 👇

Maybe the eurozone just does what it always does, and patches things up temporarily until the next crisis. But we shouldn't become complacent and assume that just because "that's what they always do", it'll work indefinitely.

One day, the Germans might call time on the whole affair.

However, one day German savers will react negatively to the transfer of wealth from them to the major debtors of the eurozone, most of whom are not German, and all of the eurozone will pay a price for the poor allocation of capital that results from negative real interest rates.

Tail risks are always those "things that could never happen"...

Coinbase has "no risk of bankruptcy" so please don't worry. In any case, trader/investor protection has limits.

The hindsight blame games have started, "everybody" saw this coming... But what does the future hold? Stagflation: A decade of investing disaster?