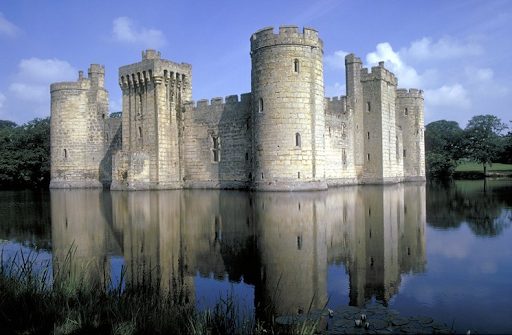 The first in a series articles on the concept of valuation from The Macrodesiac Veteran.

In this opening instalment, I would like to get you thinking about the basic concepts of valuation in relation to stocks and shares and other securities.

As we will discover it turns out they are anything but basic concepts.

If we look up the definition of a moat we'll find that it is:

a deep, broad ditch, either dry or filled with water, that is dug and surrounds a castle, fortification, building, town (or company?)

In other words, it’s a barrier to entry that protects those on one side of the moat from potential aggressors on the other.

Now, this isn’t going to be an exploration of the history of fortifications or at least not the physical sort that castles and forts represent.

However, it is going to be an examination of how those concepts can help us to value a company and assess its stock price.

So just what is a moat in the context of business?

It’s a barrier to entry. Something that a business does or owns that makes it unique and provides it with an edge over the competition.

The moat can be the gap between a market leader and the rest of the industry.
It could be tangible such as a process, patent or product. It could be intangible in the case of say, a brand and its brand recognition, or longevity in the industry, or even market share, particularly where the number of customers is limited. For example in nuclear power.

The moat analogy was popularized by none other than the celebrated value investor Warren Buffet in his 1995 address to shareholders, at the Berkshire Hathway annual meeting.

When in answer to a question from the audience, about his investment style, the sage of Omaha said:

"What we're trying to do, is we're trying to find a business with a wide and long-lasting moat around it, surround -- protecting a terrific economic castle with an honest lord in charge of the castle."

Asked to expand further he added:

Buffet’s investment business has had its own moat around it for decades in the shape of his inimitable investment acumen and style, and if you are interested (and you should be) then here are some links that quantify the firm’s holdings

The chart below plots the percentage change in Berkshire Hathaway B shares (+538%) over the last 20 years in black and compares that to the S&P 500 over the same period in blue (+309% LHS).

The concept of an economic moat provides us with a possible valuation metric for a company or business: its uniqueness.

Of course just being unique is not enough. Being unique when a market for your services or products doesn't exist, will not make your business valuable.

However, if you are fortunate enough to have unique qualities in a market that’s developed and preferable growing then that’s an entirely different scenario.

There are various ways in which we could try to identify an economic moat or degree of uniqueness in a business.

One of which is to try and find a category killer: A business within a sector or sectors that holds a dominant position.

Or we could look for the disruptors, the up and coming business which is growing market share (and growing that share faster than its peer group).

Why not take a moment to think about the investments and positions you currently hold:

In other words, do they have a moat or is their value based on prevailing market sentiment and little else?

Perceptions of value relative to price can change over time...

And whilst clearly, the author was speaking about relationships and the human condition he raised a very valid point as far as the markets are concerned:

Price and value are two completely separate items that can (and do) travel on their own paths.

In fact, the financial markets spend much of their time trying to separate price from value...

Nevermore so than in the options markets...

Time isn’t on my side

Options are securities that have a finite lifespan. Their price varies based on a number of different factors including time to expiration and their proximity to the price of the underlying instrument, which these days is often referred to as moneyness.

Option prices are also influenced by the Greeks, items such as Delta: the sensitivity of the option price to a change in the price of the underlying asset.

Gamma (which we hear so much about today) is a measure of the sensitivity of Delta...,

and Vega which is the metric that measures the sensitivity of an options price to a change in implied volatility.

Implied volatility can be thought of as the likelihood of a sharp change in the value of the underlying instrument (s) an option is over ranging from 0% to 100%.

Given the number of variables that can influence options pricing, you won't be surprised to learn that options prices and option valuations often diverge.

What's more, as many as 70% of all options expire worthless, and finish their lifetime out of the money. You could probably argue that the majority of options are likely to be mis-valued throughout their lifetime.

Some of the brightest minds in mathematics, economics and finance have tried to crack the options pricing conundrum work that culminated in the award of Nobel prizes to Myron Scholes and Robert Merton for their work on the Black and Scholes equation which appeared to have solved the complex problem for good.

That was until LTCM, (the hedge fund that Merton and Scholes joined) blew up. Using their mathematical models to identify trades resulted in LTCM losing $4.6 billion in just 4 months. They required a rescue package involving 14 banks and institutions coordinated by the New York Fed.

And in a financial sense, the two Nobel winning economists, and their masters of universe colleagues at LTCM could be said to have met Lord Darlington's definition of a cynic:

"...the price of everything and the value of nothing"

Before I sign off I'll leave you something to ponder on: The filters of price and value or valuation.

Two excerpts from my favourite price of research on equity markets and their cyclicality... Or the misjudgement of the market on the long term valuation of businesses:

Here are some companies in just one sector whose moats evaporated in a 34-year window:

Beware 'data-driven' central banks and anyone forecasting the future with a high degree of confidence...