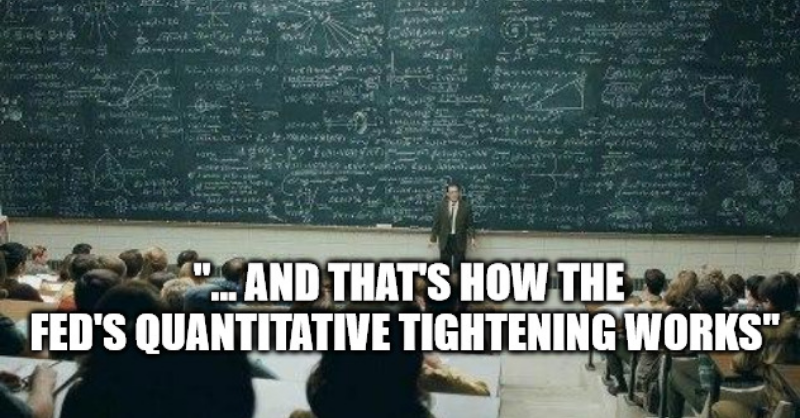 Some people misunderstand QT, seeing it as a constant and immediate liquidity drain.

Stocks close down on June 1st and the mocking starts:

The very next day, this happens 👇

And those same people are left confused, rekt and/or crying about manipulation.

So, what's going on?

The Federal Reserve started their Quantitative Tightening as scheduled on June 1st.

Sort of. It's started, but it actually hasn't. We'll come back to this at the end.

Over time, QT will impact financial markets around the world, and to some extent, influence everyday things such as how much interest you pay for loans and mortgages, how much that unprofitable startup can afford to borrow and so on.

The main goal of this post is to explain a little bit more about QT, and show how hard it is for markets to effectively 'price in' Quantitative Tightening before it actually happens, especially under the current conditions.

Much like weight loss, there are two ways for central banks to approach this.

We'll label these as passive and active:

📌 (we are here)
Simply don't reinvest the assets as they mature. This is known as balance sheet runoff. Depending on the exact composition/maturity of the holdings, this is a relatively passive and slower way to reduce the balance sheet.

It's the equivalent of Tim going on a diet and not 'reinvesting' his biscuit consumption each day. Over time, that calorie deficit will see weight loss.

The aggressive approach. Actively selling assets from the balance sheet and sucking liquidity out of the private sector.

This is when Tim gets serious about weight loss. He joins the gym, hires a nutritionist and trainer and starts researching clenbuterol cycles.

At the simplest level, it's liquidity withdrawal, as JPMorgan head Jamie Dimon explained this week (while warning of an imminent economic hurricane)... 👇

"The Fed has to meet this now with raising rates and QT (Quantitative Tightening).
In my view, they have to do QT.
They do not have a choice because there's so much liquidity in the system"

Liquidity withdrawal is usually seen as bad news for stocks and risky investments because it creates capital scarcity, at least relative to the prior status quo.

All else equal, capital becoming less plentiful means more competition for a shrinking pool of liquidity.

But all else is rarely equal: ceteris paribus isn't a real world thing.

Imagine a big pool of liquidity sitting idle, just waiting for different participants to dip into whenever they want.

Now forget that. It's not that straightforward. It's an ongoing competitive merry-go-round.

There's a constant battle to match capital with assets: Assets compete for capital, and capital competes for assets.

The capital available and the assets in circulation will constantly vary so it's hard to match them up.

Sometimes you've got assets nobody wants to buy, other times, you've got capital but can't get the assets you want.

A good example of this is happening right now in short-term money markets. Plenty of capital is sitting in the Fed's overnight RRP that would usually buy short-term T-bills, but there aren't enough of those bills to go around...

The US treasury has cut back on their debt issuance because of a lovely big tax haul...

April tax receipts totalled $864 billion, driving a $308 billion surplus last month. They expect more of the same in coming months: "Individual income tax collections for the fiscal year ending Sept. 30 are projected to land at their highest level as a share of the U.S. economy since the advent of the income tax in 1913."

While everyone's focused on QT, the government has already been draining liquidity from the system and into their coffers. Which means they probably won't need to compete for as much capital in the next few months either...

The treasury issues debt over different durations. They announce it in advance via the quarterly refunding process and have regular meetings about debt management (how much debt, and which types to issue), like this 👇

But they're not sure how much they'll need...

"...the Committee emphasized the need for Treasury to remain nimble in its debt management decisions, given the ongoing uncertainty in borrowing needs; the strength in receipts should be monitored to determine if it is more of an anomaly or a trend that could warrant additional cut to coupons in the subsequent quarters."

Some analysts asked if the Fed & Treasury would collude to deliberately tighten financial conditions. By issuing a higher proportion of longer-dated bonds, they could theoretically increase the risk premium.

If there's one thing bureaucracies do well, it's staying in their lane...

Going forward, the Fed will still be active and buying in the markets, even though QE has ended.

They will simply be reinvesting the difference between the amounts that mature and the QT cap.

From September, the pace of the runoff doubles, so that same scenario would see them only reinvest $68bn ($128bn - $60bn QT).

It might seem confusing, and some will get very confused, but that's how the Fed's balance sheet will reduce.

If you really want to get into details, have a read of these:

Oh, and QT hasn't really started yet because... 👇

Basically, people need to chill tf out about QT. It's just one moving part to consider within the giant money machine.

We all love a good story. And markets are FULL of storytellers. How well do you understand stories and the rules of the game?

The energy picture is looking seriously messy. (Even more) difficult and unpopular decisions lie ahead...