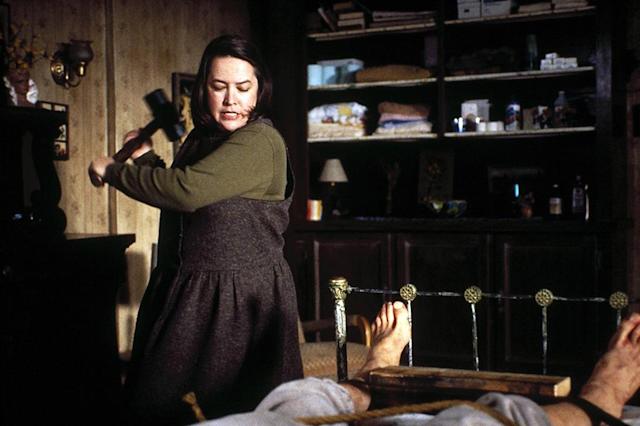 You probably haven't seen 'Misery'. It's a 30 year old film based on the Stephen King book of the same name, and one iconic scene is relevant to what's happening in the economy today.

After drugging him and strapping him to his bed, Annie calmly tells Paul about the practice of “hobbling,” once used in African diamond mines on workers who tried to run off with the goods.

As Paul begs for mercy, she wedges a piece of wood between his legs and picks up a sledgehammer, assuring Paul, “It’s for the best.”
Then she brings down the hammer and breaks his ankles in two swift strokes. “God, I love you,”

...the central bankers say as they aim for that mythical soft(ish) landing while tightening financial conditions about as fast as they can pick up the sledgehammer.

"it's for your own good, we love you"

Which brings us to The Misery Index 👇

Gavekal: The Misery Index, created by famed economist Arthur Okun, adds up the year-on-year inflation rate and the unemployment rate to measure the degree of economic stress for regular folks.
The higher the index, the more people struggle to get by.

Today, the rapid acceleration of inflation has sent the Misery Index to its highest level since at least the global financial crisis, reflecting the rising cost of living across the Western world. What's more, spikes in the index usually coincide with recessions.

Inflation also puts a dent in households' real income, which is likely to reduce domestic demand and consequently demand for labor in some countries. If unemployment rises, the index can climb higher still.
The Misery Index points to tough times ahead.

These little models are useful concepts, but they don't always translate to the modern economy.

Inflation's high, but the unemployment rate in most developed economies is at, or near, record low levels, even in Europe!

Sh*t. That means more pain ahead then right? It's only a matter of time until unemployment increases...

“That rule of thumb describes the observed relationship between changes in the unemployment rate and the growth rate of real gross domestic product (GDP).

Okun noted that because of ongoing increases in the size of the labour force and in the level of productivity, real GDP growth close to the rate of growth of its potential is normally required, just to hold the unemployment rate steady.

To reduce the unemployment rate, therefore, the economy must grow at a pace above its potential.

ongoing increases in the size of the labour force

Ah yes, the ongoing increases in the size of the labour force that peaked in... 2000.

Which is what the unemployment rate misses completely. People out of the labour force aren't counted.

Is the Misery Index valid in the modern world then? Probably not.

Maybe unemployment stays low for longer because of low labour supply. Or we bring retirees back into the workforce 👇

"If Captain Tom taught us anything, it's that old people are really able and willing to do things"

Don't worry. It's a parody. And for all of the obvious reasons, it's unlikely to happen on a large enough scale to make an impact.

Back to central banks

They're now the top risk for investors, along with a recession (which is most likely to be caused by hawkish central bankers and their 'hobbling' efforts). 👇

Growth expectations remain weak, BofA said, with optimism about the economic outlook falling to a record low in its survey history

Cash levels among investors rose to 6.1% from 5.5% in the previous edition of the survey. Commodities, healthcare, consumer staples were the top picks while technology, Europe and emerging markets were shunned

The May fund manager survey is "extremely bearish", BofA said, but still missing the "full capitulation" piece as investors continue to expect rate hikes rather than cuts.

In fact, investors increased their view for the number of rate hikes from the Fed this tightening cycle, and now expect 7.9 hikes, up from 7.4 in April.

Realistically, how long can central bankers keep it up?

They say inflation hits lower incomes the hardest, but so does recession.

Something will have to give 👇

We'll see what they have to say for themselves today.

CONTINUED ABOVE TREND GROWTH FOR U.S. IS THE BASE CASE OUTLOOK FOR NEXT 18 MONTHS AT LEAST.

HOUSEHOLD CONSUMPTION EXPECTED TO HOLD UP THROUGH THIS YEAR.

BIGGEST RISKS TO THE US OUTLOOK ARE WHAT WILL HAPPEN TO EUROPEAN AND CHINESE ECONOMIES; DOESN'T SEE A RECESSION IN EUROPE DESPITE UKRAINE WAR.

PROFIT isn't a dirty word. It's an essential cog in the global economy. Stick your windfall tax up your a*se

Money printing doesn't explain the inflation we've seen. It's not even close to being that simple. It's not THAT complicated either... And there might be more to come 👇