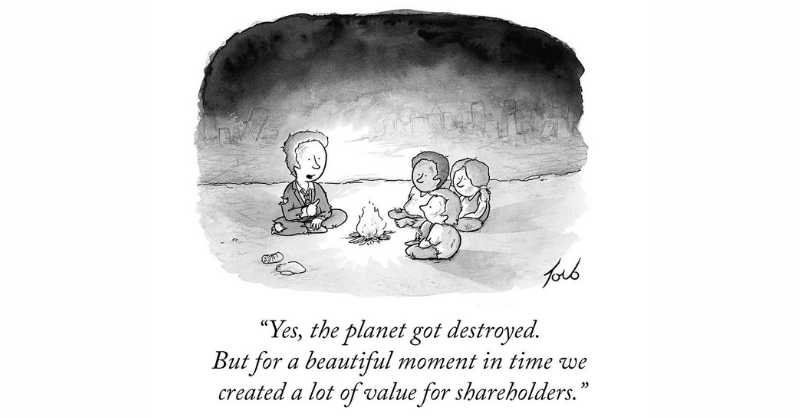 Profits are evil. Every company that makes money has a founder that should be hung from a tree by their testicles, because the profiteering patriarchy must be crushed, and outraged citizens must rise up against them. ✊

I didn't include the female CEO's because this is an equality friendly newsletter, and women have already suffered enough. They deserve their shot at the profiteering game too.

I don't really believe any of this. It's just the woke nonsense that's crept into company cultures because they've lost their way. Lost their purpose.

There are valid arguments and criticisms within the wokery, especially this 👇

But the 'solutions' proposed usually won't solve anything. It's all fake. A charade to satisfy the loud minority. The problems run way, way deeper than ideology about profits being good or bad.

This tweet brought the amazing Michael Mauboussin (that's his quote up there 👆) back onto my timeline, on the idea of shareholder value. 👇

There are few people as consistently clear-headed as Michael. The article is from 2016, but it's as relevant today as ever. 👇

Reclaiming the Idea of Shareholder Value

Corporate governance issues are constantly in the headlines. Activist investors challenge management strategies. Investors and others ask why companies binge on buybacks while skimping on value-creating investment opportunities.

But discussions of corporate governance invariably miss the real problem: most public companies have extensive governance procedures but no governing objective. As a result, there is no sound basis for stakeholders, including shareholders, to assess the performance of the company and its executives.

Measurement is crucial in assessing what a company is trying to achieve. Consider this (and bear in mind that the research linked is from 2003!) 👇

Research shows that non-financial metrics that companies use are commonly untethered to either long-term value creation or the company’s strategic goals. It comes as no surprise that if companies can keep score as they wish, they will often reward managers even when they fail to create value.

For example, companies can boost earnings per share by repurchasing shares, thereby hitting compensation targets, while forgoing value-creating investments in the business.

This has always been the (valid) criticism of these measurements. From MDAU (Monetisable Daily Active Users) to EPS (Earnings Per Share), these metrics are gamed and manipulated to match incentives.

Goodhart's Law applies again: "when a measure becomes a target, it ceases to be a good measure"

And this is always the problem with fixed targets. They can drive misbehaviour. The Wells Fargo fake account scandal is a perfect example.

In the end, “unrealistic sales goals led thousands of employees to provide millions of accounts or products to customers under false pretenses or without consent, often by creating false records or misusing customers’ identities,”.

It cost the firm $3 billion plus the immeasurable lost productivity of staff gaming the system for a different purpose than it was designed for. 👇

But it cost a lot more too. Like the missed growth opportunities for the bank due to the $2 trillion asset cap imposed by the Federal Reserve since early 2018 and throughout the low rates period since.

The relative advantage that other banks have managed to open while Wells Fargo's growth remains capped has been consequential. 👇

Mauboussin's idea is that it all comes down to definition.

The root problem is that few companies have a clearly-stated governing objective. As a result, executives can justify almost any decision they make.

And despite the many criticisms levelled against him, Amazon founder Bezos has been unwavering in this respect. Guided by principles and a long-term view rather than a set of performance metrics, he delivered.

Amazon's 1997 shareholder letter has been referenced every year since.

It's All About the Long Term
We believe that a fundamental measure of our success will be the shareholder value we create over the long term. This value will be a direct result of our ability to extend and solidify our current market leadership position.

Mission accomplished. If investors are serious about wanting what ESG promises (and I'm not entirely convinced they are), then doesn't it make sense to invest in companies with a clear objective of what they're trying to achieve rather than whichever is the best at gaming carbon emission metrics?

Mauboussin: Our solution dwells not on which governing objective a company should select, but insists that the company be clear about what it is trying to do. Getting companies to do as they say is a win-win for the long-term interests of investors, the companies they invest in as well as all stakeholders.

Rather than demonising companies for their profits (demonisation is almost always a short-term reaction to the latest thing), shouldn't we try instead to understand what they're aiming to achieve, their progress towwards the objectives, and how much society will benefit?

If ESG, or similar social goals, are ever going to truly matter, completely de-constructing the current framework is the first step. The energy crisis could be the catalyst to torpedo the whole thing.

And would it be all that bad? A bit of Schumpterian creative destruction could force the world to ditch these meaningless metrics and replace them with something less tangible. Values.

Zoltan says that Russia and China are challenging the US hegemon. Do either of them really want the job? And will it end in war?

Britain is fundamentally broken. Inflation will soar this winter, everyone will be poor, and to top things off, it'll be cold, dark, wet, and depressing just like every other British winter. But...