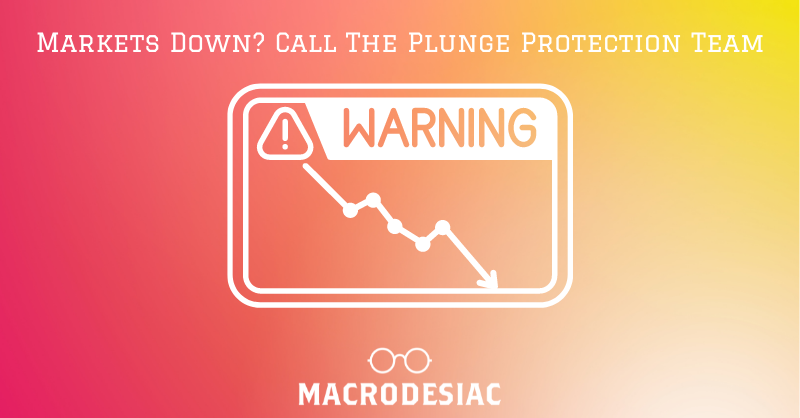 You've probably heard of the Pluge Protection Team (PPT) in your time in the markets.

Conspiracy theorists will say the PPT is a shady cabal, plotting to manipulate the price of stocks, while the other half will tell you the truth!

In this article, we'll run through:

What is the Plunge Protection Team (PPT)?

First up, the Plunge Protection Team (PPT) definitely exists. It was established by Executive Order back in 1988 as part of the response to Black Monday which was one of the worst stock market crashes in history.

They didn't call it the Plunge Protection Team though. Instead, we got this dreary name 👇

(1) the Secretary of the Treasury, or his designee;

(2) the Chairman of the Board of Governors of the Federal Reserve System, or his designee;

(3) the Chairman of the Securities and Exchange Commission, or his designee; and

(4) the Chairman of the Commodity Futures Trading Commission, or her designee.

Currently, that team of superheroes lining up to save the day would be Janet Yellen, Jay Powell, Gary Gensler & Rostin Behnam.

Why was the Plunge Protection Team created?

This working group was set up to 'recognize the goals of enhancing the integrity, efficiency, orderliness, and competitiveness of our Nation's financial markets and maintaining investor confidence.

Nowhere in the order does the group gain the power to purchase securities on behalf of the government. Instead...

The working group shall report to the President initially within 60 days (and periodically thereafter) on its progress and, if appropriate, its views on any recommended legislative changes.

So, if they don't come steaming in with the money printer on full blast as soon as stocks hit limit down, what does the Plunge Protection Team actually do?

Treasury Secretary Steven Mnuchin will host the call with the president’s Working Group on Financial Markets, known colloquially as the “Plunge Protection team.”

Great. They have a phone call.

OK, maybe they have more than one phone call...

Many conspiracy theorists believe the Plunge Protection Team actively buy stocks to stop a market crash, but this is not true.

The belief was inspired by a 1989 speech by Robert Heller who said the Fed could buy index futures if the stock market was crashing.

They have never done this, however, and it has never been part of their market stability policy.

But there is some evidence the Plunge Protection Team may influence larger institutions such as banks and hedge funds to do so.

It's probably no surprise that the Fed (Federal Reserve) chats with the financial sector, but when they meet is interesting...

While I find few economically and highly statistically significant changes, a striking exception is an increase in late-night rides from the major commercial banks to the New York Fed soon after the end of the FOMC communications blackout.

Tight restrictions on Federal Reserve staff communications are lifted at midnight the day after the FOMC announcement, and rides to the FRBNY are elevated between 1:00 and 4:00.

Implying that immediately after a meeting, (literally an hour after the blackout ends), commercial banks want to have a chat with the gang at the Fed. Money never sleeps. The plebs can wait for the prepared speeches on CNBC the next day...

Between direct rides and coincidental drop-offs, I find evidence suggestive of approximately 1.6 extra meetings between individuals associated with the New York Fed and individuals associated with major banks around each FOMC announcement. The timing and locations of the rides imply unofficial or discreet interactions, though this certainly need not imply any impropriety.

Spot the year the Fed launched QE3 (Quantitative Easing Round 3) and established an inflation target... 👇

As for the idea that accidental leaks can happen, well that's not exactly outlandish either. Happened last year in Europe. 👇

The European Central Bank is facing a call to stop the practice of holding closed-door meetings with the private sector after ECB Chief Economist Philip Lane reportedly disclosed an unpublished inflation forecast at one such event.

Yet, there's no evidence of the Fed, the Plunge Protection Team or the US government actually buying stocks to support the market. Unless 'the market' is their personal accounts of course... 👇

It's not even clear that they have the authority to do so. Even though it was apparently discussed under Trump's watch... 👇

So, what does the Plunge Protection Team actually do?

Here is what the Plunge Protection Team says their mandate is.

'recognize the goals of enhancing the integrity, efficiency, orderliness, and competitiveness of our Nation's financial markets and maintaining investor confidence.'

If you're expecting them to show up and start hosing liquidity onto every stock market fire, you're setting yourself up for disappointment. There's no crack team of traders waiting to slam the buy button as soon as the batphone starts flashing.

If you expect them to say and do whatever's required to maintain (or restore) investor confidence whenever the sh*t really hits the fan, you've got much better odds.

Do they chat with the commercial banks before announcing this kind of program? Definitely can't rule it out. There's clearly a cosy relationship so it'd be more of a surprise if they didn't quietly set them up to buy on the announcement and rebuild that confidence.

But that's not the Plunge Protection Team you'll read about it on the interwebs...

Euro in freefall, Germany panicking. ECB meeting on July 21st is crucial, but it's not looking hopeful...

The Fed minutes are ancient history, France aren't taking their debt seriously, and the UK's rate hikes with no economic growth.