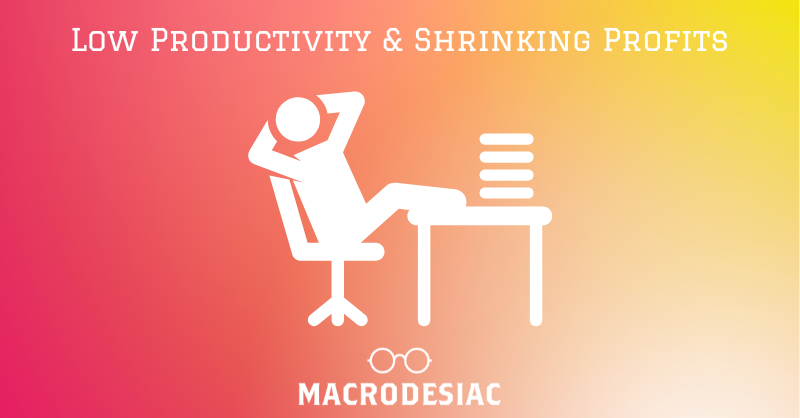 Everybody's talking (inflation) at me, but I don't hear a word they're saying. Only the echoes of my mind...

While the market focus is largely on inflation, productivity is quietly coming back into the spotlight. It's one of those things that hides in plain view, but is rarely spoken about. Certainly not as much it should be.

On Friday, we asked if Wage Hikes Will Lead To Persistent Inflation.

You can't have that conversation without considering productivity and some of the relationships that drive wages, inflation and corporate profits.

So here goes, starting with a definition...

That's literally the Wikipedia definition. By some measure... And there are loads of official ways to measure productivity. Rather than focusing on the measure, let's take the concept:

And it can be achieved in an almost infinite number of ways. Agriculture is probably the best example.

Jobs that used to take hundreds of workers can now be performed by machines. Production per acre increased. Less crop wasted due to upgraded machinery, technological advances, and so on. More is produced with less.

In certain aspects of our modern world, productivity is harder to define. Twitter's been in the news plenty of late. Everyone's an expert on what Elon should do and the implications. Happy to leave them to it...

It's impossible to know what the 'right' answer is. I suspect it lies someone between those two positions. Ultimately it's an argument about productivity.

How many workers are required to keep Twitter working as it should and generate profits via advertising? To an outsider, it looks like "not as many as they had"...

But maybe "more than they have now" is also the right answer.

Every corporation/organisation acquires bloat as it grows. Case in point, the UK's largest employer...

Does the NHS really need 1.3 million staff to service a population of 68 million? Please don't write angry letters to the editor. I'm just asking! Maybe it does, but it seems unlikely to have escaped the productivity/bloat trap.

This chart (via @domwh1te) is worth thinking about in this context:

Does this represent labour hoarding? Using PMI's might not be the cleanest measure, but there's merit to the argument (and it's hard to measure anyway!).

Productivity isn't a fixed thing. Market conditions are relevant too, and balancing the demand for goods and services with your ability to provide those goods & services is arguably a business leaders' hardest job.

Run the company too lean, and you risk not being able to meet an uptick in demand. Run things too fat and margins are eroded by the excess capacity that isn't being utilised.

Given the pandemic disruptions and difficulty in finding workers since, there's a decent chance that companies have been reluctant to fire workers. At least until it's so blindingly obvious that too much cash is heading out the door each month, and not enough is coming back in...

Friday's question was: Will pay hikes fuel another round of price increases and what could that mean for markets?

As the economy slows, it seems reasonable to expect that wage hikes will become harder to negotiate overall. We've seen plenty of examples of layoffs already, as some of the excesses are trimmed.

Put another way, the more that labour is hoarded without a proportional increase in productivity, the more company profits will suffer.

Meta is an excellent case study. A shocking earnings report showed a drastic decline in profitability...

Which led to a gap down in the stock price, followed a few days later by reports that Meta would begin large-scale layoffs.

Bad news for those employees was good news for Meta's valuation 👇

And it's a trend we'll almost certainly see more of. If we don't, the Morgan Stanley view looks increasingly likely. 👇

In our view, what was priced at the October lows was peak Fed hawkishness, not material earnings downside.

If we were forecasting a modest 5% forward EPS decline and a reacceleration off of those levels, we'd concede that the earnings risk is probably priced, but we're modeling a much more significant 15-20% forward earnings downdraft, which should demand a more recessionary type 13.5-15x multiple on materially lower EPS.

The deeply inverted yield curve is another sign that things really aren't looking great for 2023. Have a read of David's thoughts here 👇

Greed is good. Don't let anyone tell you otherwise.