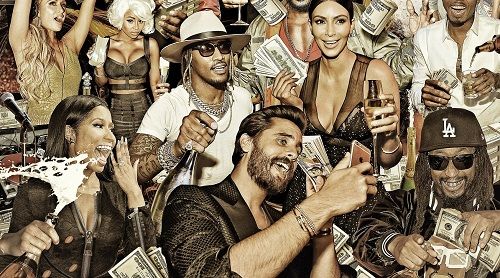 The Fed did their thing yesterday, hiking by 0.25%. The projections/expectations were pretty hawkish too.

The green line represents the mid-points of the Fed's rate forecasts. To hit that expected rate by the end of 2022, they'd need to hike another six times this year, the equivalent of a 0.25% hike at every meeting.

It's a BIG jump from the December dots 👇

Higher rates are supposed to be bad for stocks, but they rallied after the meeting just to annoy everyone.

Still plenty of challenges ahead. Aside from higher rates, Quantitative Tightening is on the horizon too. Maybe as soon as the next meeting.

Federal Reserve policymakers have made "excellent progress" on their plan for reducing the central bank's nearly $9 trillion balance sheet, and could finalize details at their next policy meeting in May, Fed Chair Jerome Powell said on Wednesday.

Overall, he said, the plan will look "familiar" to when the Fed last reduced bond holdings between 2017 and 2019, "but it will be faster than the last time, and of course it's much sooner in the cycle than last time."

In the press conference Powell said "we are literally just finalising balance-sheet details".

Liquidity Injections (QE) make the line go up so the opposite MUST be true for Liquidity Withdrawal (QT).

QT is bad for stocks.

Except it isn't that simple...

Stocks kept on climbing even as the Fed made their announcement.

Stocks kept on climbing even as the Fed started QT.

Look at the size of the daily candles (volatility) on the left of the chart.

The market shifted from a low volatility regime to a higher volatility period once QT got underway.

Some of this could also be attributed to Trump's trade war with China.

Why is QT is generally bad for asset prices?

Because it decompresses the risk premium. The polar opposite of QE.

As the central bank QT program sucks liquidity from the system, there's a shrinking pool of capital that assets have to 'compete' for.

Government debt issuance plays a role too. Take the US treasury for example.

They need to issue debt so they can pay government employees, meet their budget commitments, pay social security etc. etc.

If the treasury are issuing (selling) debt at the same time as the Fed are selling debt, they're both taking liquidity from the private sector and reducing the pool of investable capital.

And for various regulatory reasons, the banking system 'has to' absorb the government issuance to ensure they meet their quota of High Quality Liquid Assets (HQLA).

All of which means there's less left over to chuck into fun things like memestonks and crypto.

It also means the S&P 500 isn't the first place to look for QT effects. By the time it shows up there, it's almost over.

Start with the most speculative stuff and work your way up to the highest quality assets.

QT: This time is different

No, it really is. The Fed's planning to "go faster" this time.

"The job of the Federal Reserve is to take away the punch bowl just when the party is really warming up"
~ Fed Chair William McChesney Martin, Jr (1955)

Not only are they taking away the 'punch bowl' by ending QE and hiking rates this month, they're soon going to be that girl at the party taking sips from everyone's drinks when they're not looking.

Found a guy who doubts the punch bowl 👇

There’s no such thing as a “punch bowl.” Serious people should stop pretending that there is one.

Guess I'm not serious people. Nor is the Fed chair who said it over 70 years ago...

Anyway, these are the dates to watch. Six more Fed meetings in 2022 👇

Who needs to work anyway?

In this booming housing market, many homeowners earned more last year from home appreciation than from their jobs.

Maybe Zoltan had a point here 👇

We're heading into a fascinating period now. The Fed's looking to let the air out of the post-Covid euphoria while avoiding a recession AND managing the fallout from the Russian sanctions.

We've been monitoring credit spreads with Macrodesiac Premium members. They'll be a key part of the puzzle going forwards.

They should, but they probably won't. Why? Because slow and steady is the 'least bad' option.

The Bank of England hiked rates, then said some stuff and GBP sold off. What are they playing at?