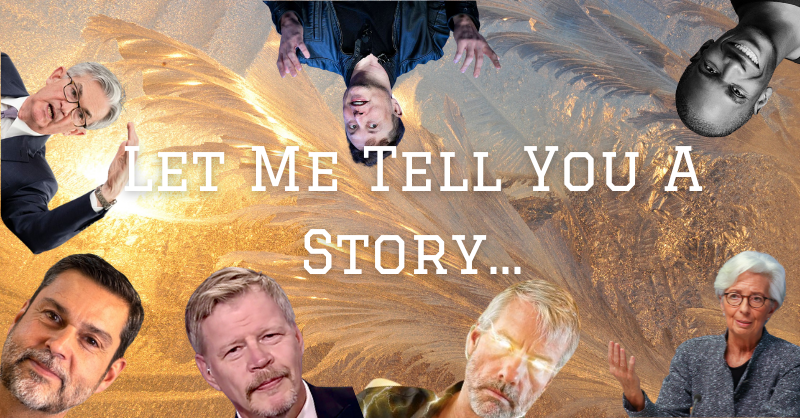 We all love a good story. And markets are FULL of storytellers.

Some are clearly full of sh*t, many are full of sh*t (but it's not so clear), and others use stories as a way to communicate really boring stuff and make it relatable...

I'm sure there are plenty more types too.

It occurred to me recently that a lot of people don't really understand the rules of the game, the role that storytellers play in it, nor the hidden relationship of market participants with these storytellers.

Before we go any further, let's be really clear. Stories are a fundamental part of the entire human experience, not just in markets. 👇

Anthropologists tell us that storytelling is central to human existence.
That it's common to every known culture. That it involves a symbiotic exchange between teller and listener -- an exchange we learn to negotiate in infancy.

Just as the brain detects patterns in the visual forms of nature -- a face, a figure, a flower -- and in sound, so too it detects patterns in information. Stories are recognizable patterns, and in those patterns we find meaning. We use stories to make sense of our world and to share that understanding with others. They are the signal within the noise.

Gotta take issue with that last line though. Stories are as much noise as they are signal.

And there's a big problem with stories too. Our brains are primed for nice, clean stories. They have beginnings and ends, lessons and morals. A journey from hope to despair, and back to hope again.

This pattern is so well known that practically every film or book you read follows these same well-trodden paths, yet we still demand moar new stories to read/watch (and never seem to get sick of them...)

The shapes of stories 👇

You get the idea. Stories follow distinct, recognisable patters and our brains lap them up. Usually, the ending is some kind of happily ever after, better world.

But the real world doesn't always follow these patterns.

For starters there are billions of people all living out these stories. Who's the lead? Whose storyline are we following?

Bring In The Celebrities

We'll focus on three 'figureheads' that jump to mind.

All three have attracted ire and rage during, and since the big crypto bull run.

But who are they? And why are they telling these stories?

It's tempting to get moralistic and judge them. "They're just taking advantage of the people" and so on.

But the archetypal hero of one of the earliest and best-known Western stories knows better.

“Father, forgive them, for they know not what they do.”

Maybe they do know what they do, but they just can't help themselves...

See, Raoul is a former Goldman Sachs Head of Sales. Literally, a salesman. And if you're going to reach the heady heights of European equity sales, don't you have to embody sales completely, with every fibre of your being...?

And there's a common characteristic among the best salespeople I've met. They have this almost supernatural ability to convince themselves so deeply of the story they're selling that it's impossible to argue with them.
If they're convinced, then they can convince others. Sales 101. I don't even think they realise they're doing it.

So when Raoul bangs on about "The Exponential Age", is he jumping onto a trend so that he can ruthlessly profit from it, knowing full well that it'll collapse at some point and people will lose their investments?

Or maybe the latest craze is such an enticing thing to sell, an opportunity that he can't bear to miss out on, because sales is what he does and who he is, and maybe it actually is a new era... and then he's convinced... and we know what happens next.

We'll never know the answer to that, but if you're listening to anyone tell you a story, consider who's telling it and what their motivations might be...

The same goes for Michael Saylor. Twenty odd years ago, Microstrategy stock fell from a closing high of $3130 to just over $4 per share as the dotcom bubble burst and MSTR's accounting practices were found to be fraudulent by the SEC.

Saylor gave an interview to Newsweek in June 2001, saying:

Was he recommending people should buy Bitcoin purely to get rich? Or was it because that would coincide with his visionary vision of the future...? 👇

“Once you know how it all ends, the only use of time is… how do I buy more bitcoin?"

If he genuinely thinks he knows how it all ends, then he probably thinks he's doing you a favour by telling you to buy Bitcoin...

As for Arthur Hayes... I haven't figured out his motivations yet. A former BitMEX colleague says he understands "being a showman and understanding the economics of attention", but what's he selling?

The point is that markets are full of people telling you their stories.

Central bankers, company CEO's, FinTwit celebrities, investment advisers and so on. Everyone's at it.

You can spend time moralising about what people in "these positions" should or shouldn't do and say, or find someone to blame, but that's a waste of time and energy.

Far better to try and understand their motivations, and why they're saying these things.

The same goes for anyone selling you anything: stories, visions, stocks, investment plans, complex products. What's their motivation and what do they get out of it?

This isn't about good vs evil, or storybook endings. Ultimately, it's always our own responsibility. Caveat Emptor

“It is not the business of government to make men virtuous or religious, or to preserve the fool from the consequences of his own folly.”

“I ask no one who may read this book to accept my views.
I ask him to think for himself.”

Production targets aren't being hit. IEA's Birol says it'll be worse than the '70s. Oil to $300 if history rhymes...?