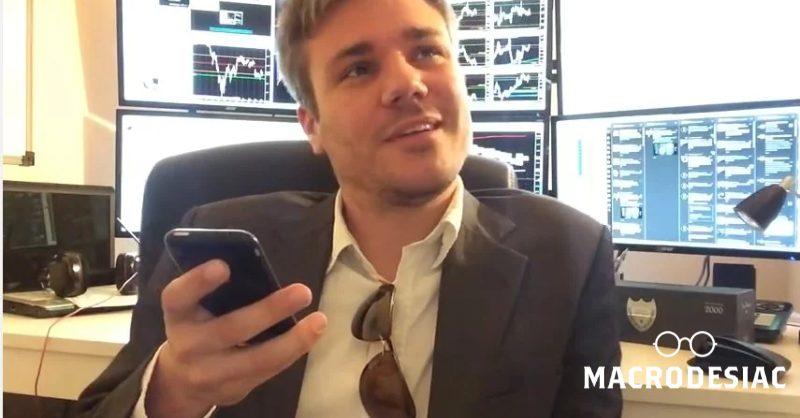 The man in the picture at the top of this page is Thomas Dante. Your trading mentor's mentor. He's been around the markets for over twenty years and penned one of the best descriptions of trading you're going to find anywhere on the interwebz 👇

Welcome to the hardest game in the world.

Unfortunately, you’re playing with some of the sharpest, fastest, most intelligent, well informed, stubbornly irrational and in many cases, unethical minds in the world.

So, leave all your dreams of making quick and easy money behind.

The first aim is survival.
Your absolute first goal is to learn how to stay in the game.

You can only do this by mapping the territory.
By understanding how the enemy thinks and acts.
By having a solid game plan.
And by picking your battles very, very carefully.

Yeah, it sounds a bit dramatic, but that's what makes it good. Everyone loves a bit of drama. Maybe a little too much.

At Macrodesiac we overwhelmingly focus on the big macroeconomic picture, but there are long periods when the market doesn't care about anyone's theories of imminent Armageddon, infinite bull markets or whatever's in between.

This isn't a stock market is not the economy thing. It's just the nature of the beast. Sometimes, risks are top of mind. Other times, those exact same risks just don't matter. Markets are as fickle as the human nature that drives them.

The beauty of taking a more macro focus is that it allows you time to pick up on longer-lasting trends, potentially bigger moves. The downside is that when markets aren't trending, it gives you (too much?) time to think. And the devil makes work for idle hands.

Which is where Mr Dante comes in. He's finally updating his YouTube channel with new videos. Focusing heavily on execution, psychology, and generally being professional in your trading approach.

All very useful stuff, no BS, quite sweary, highly recommended.

For example, the idea that the Fed is already pivoting and markets have already bottomed has gained traction lately.

Maybe that's right, but history isn't on your side there. The macro outlook is still grim. Recession is almost inevitable. Inflation's peaked (probably) but still very high.

Typically, the curve will uninvert shortly before recession hits. Like this 👇

And stock markets tend to find love after the worst of the recession has passed (blue circles)...

All of which implies that we're not there yet... Maybe this time is different? Maybe it's the same. It can easily get confusing, which is why process is so important.

David's process is almost diametrically opposed to Tom's. Without getting into specifics, when the macro factors line up, he's interested. Gradually building a position, looking to jump on a trend early enough to capture a good chunk of it. No take profit is set.

Which approach is best?

b) That you can stick to

That's ultimately the name of the game. Understanding the forces driving your markets, and most importantly, having clearly defined triggers to consistently execute those trades 👇

In a bull market, sloppy habits can go unpunished. In a bear market? NGMI.

Semiconductor boom. Who you betting on? There's a whole value chain to think about. Just don't think too hard...

💵 Being A Good Loser

You'll often hear platitudes about learning to love your losses. Not on these pages. Learn to loathe your losses.