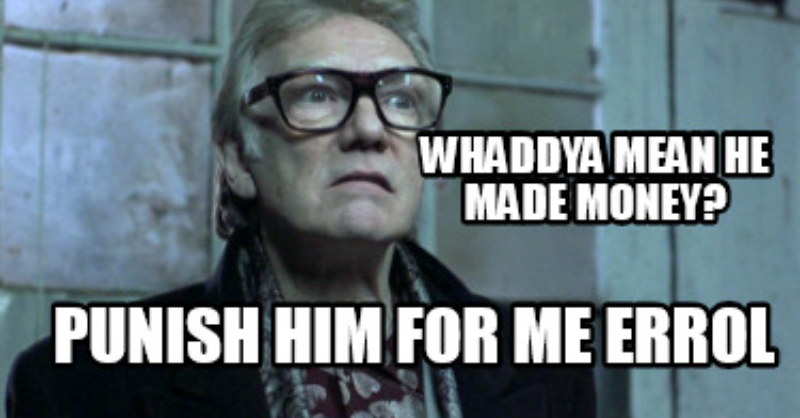 Why don’t people understand things? is a question I ask myself every day. Obviously, I'm just built different and understand everything perfectly and completely.

That's genuinely what I used to think. Ah. The blissful ignorance of youth. I've learnt my lessons (usually the hard way), and I'm now at the 'forced humility' stage of adulthood.

I imagine this phase lasts until I'm so old that I can get away with saying random stuff without people bothering to correct me.

There's plenty I don't understand, and when I find those things I usually make the effort to figure them out, or at a minimum, see the big things I'm missing.

So it is with windfall taxes. I bang on about them because people don't seem to get that tax isn't supposed to be punitive. Tax might feel like a punishment, but that's not really the intent.

Windfall taxes are especially bad. It's as close to government theft as you can get.

Who gets to decide which firms should be punished by paying windfall taxes?

We shouldn't blindly trust anyone's (reactionary) judgement on stuff like this. Remember when Amazon made too much money™ in the pandemic? 👇

Amazon employs over 1.5 million people PLUS contractors, but even though they pay all of those salaries, they don't share profits with their workers (except the ones that own shares in the company via their 401K but let's not worry about that) so zey must be punished or something...

That's for Q2. Last quarter was terrible. Amazon's $105 billion of sales generated no profits. Most of the business had negative profit margins, also known as we lost money guys.

"Hi everyone, this is awkward, but you know those extra profits from before that we shared with you? We're a bit short this quarter so we need to take some of those back. Hope you understand that solidarity is necessary. We're all in this together, we share everything, the good and the bad"

Amazon Web Services was the only bright spot, meaning that Amazon turned a small profit. A couple of billion dollars. That's it. Their profit margin was 2.3% for the quarter. TINY. AWS sales are slowing too.

Still, they made money during the pandemic so PUNISH THEM, right?

But let's really drill (lol) into these energy companies and why people think they deserve to be spanked.

From the Times article linked at the top:

This week BP announced £7.1 billion of profits for the three months to September.

The oil giant’s profits were more than double those during the same period last year and significantly better than expected. It said its performance was because of an “exceptional” result by its gas traders.

One word should be the red flag here: Exceptional.

i.e. NOT a permanent state. We all know how volatile gas prices were during the last quarter. If this becomes 'the norm', then maybe we need to talk about continued windfall taxes, and/or ensuring companies are investing in more production to safeguard against this repeating in the future.

Because the money utility firms have been making via speculation in wholesale mkts should actually be hedges that enable them to keep retail prices low. Its the only reason futures and options exist.

I disagree. Futures and options don't just exist for hedging. However, the rest of it basically makes sense. In an ideal world, they should be hedging as much as possible.

But this isn't an ideal world. Clearly, if gas is more expensive now because the world has less available supply, you can't just hedge that entire change away.

Nevertheless, hedging should be used to ensure prices change as little, (or as smoothly) as possible. Except when markets are completely broken and hedging becomes impossible or not viable. Which actually happened. We covered that here 👇

Yep, the very act of hedging was actually driving higher wholesale gas and energy prices. So, the idea that they should've just hedged falls flat. The market was too broken. Sometimes, shit just happens.

So, well done to anyone who managed to trade that insanity and earn a profit. But let's not pretend they're the ones setting the prices.

Aside from that, if we're doing this on moral grounds....

Do you support the Saudi regime? Plenty of people seem to have a problem with the Saudis buying stakes in Western companies and football clubs. Something about human rights...

Qatar too. We're really worried about their human rights stuff even though we're holding a World Cup there. We're so worried about it that we moved the tournament to winter and reorganised the entire football season to make sure it could happen...

Now, let's make sure those companies/nations achieve even more dominance by taking profits from our homegrown, highly moral (/s) oil and gas crusaders while ensuring these regimes (that we supposedly think immoral) have loadsa money to invest in exploration and extraction so that we can become ever more dependent on them.

Rest assured our governments will efficiently reallocate those windfall funds as well...

Profit isn't evil. It's what motivates and drives society forward. (Responsible) risk-taking is essential and needs to be rewarded. One of the biggest problems with energy companies is that their investment cycles are so long.

It takes billions in investment to build facilities for extraction, refining and so on...

This stuff happens over years, decades even. Energy companies have LONG time horizons. What are the population projections? How much energy is the world likely to need in ten years time? Which types of energy will be required?

New policies must be set up to minimize the risk of a supply crunch and reduce as much as possible the negative impacts on our societies of such an event.

In addition, the prospect of a slowdown in oil supply strongly reaffirms, in line with global climate objectives, the need for a transition towards an increasingly moderate and efficient use of our energy and the deployment of more renewable capacities.

Countries will gain in energy independency and partially reduce the impact of an oil crunch on their economies.

Seizing 'excess' profits doesn't help with investment in the future, especially when they already pay a higher rate than most 👇

Oil and gas firms operating in the North Sea are taxed differently to other firms.

However, the firms can also apply for tax savings worth 91p of every £1 invested in fossil fuel extraction in the UK, which is a decent incentive.

I could keep writing about this stuff forever, but hopefully you've got the point. Windfall taxes don't solve anything, this stuff is complex and multi-faceted, and most importantly, the anti-capitalist agenda is dangerous, especially when it comes from a place of ignorance 👇

Be very careful what you wish for...

If you want to know more about oil and gas, this is an excellent resource 👇

Whatever happens today, this isn't the pivot you're looking for

Uptober played out at the index level, and a handful of single stocks soared above and beyond. The Veteran's spotted something that links them together...