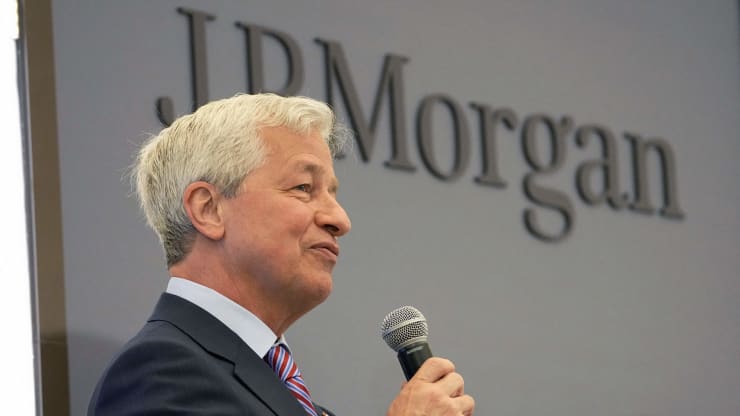 JPMorgan has SECRET plans. I read about them on CNBC's website.

Secret's out now. And CNBC know a helluva lot for something so secretive...

A key part of Project Bloom is a digital network for JPMorgan clients that will match start-ups with investors, helping them in fundraising rounds, said the people.

While elements of these offerings exist across parts of JPMorgan’s sprawling operations, the new effort aims to create a one-stop digital portal for start-ups and venture capital firms, family offices and other institutional investors, said the people.

The business aims to tie in offerings from the firm’s corporate and investment bank, commercial bank and private bank. For instance, the private markets trading desk first reported by CNBC in 2020 will feed into the new platform, according to the sources.

By creating a self-service platform, JPMorgan can target smaller, earlier-stage companies than its bankers traditionally engage with, helping them raise funds and offering automated recommendations, the people said.

JPMorgan appears to be betting that if it can create a fully-scaled private company network before the fintechs do, its place in a future in which private companies have even greater importance will be assured.

Makes sense. Fend off competition from the pesky little fintechs before they can truly scale and compete with you...

This trend towards private equity is nothing new. Michael Mauboussin & Dan Callahan wrote about it back in 2020 here:

From the end of World War II through the early 1970s, many companies went public to raise capital to fund their growth.

They also have unprecedented access to capital through the private markets. Consequently, many young companies have elected to stay private longer than did the companies of prior generations.

Basically, firms don't need as much investment to buy machinery for factories nowadays. This is the digital era.

And there are plenty of 'unicorns' out there... 👇

That earlier quote from the CNBC piece grabbed my attention...

Even greater importance than this...? 👇

In recent decades, sophisticated investors, including pension funds and endowments, have moved their asset allocation toward private markets in search of higher returns.

For example, Yale University’s endowment, run by its chief investment officer David Swensen since 1985, has delivered excellent long-term returns and is considered a pioneer in asset allocation.

When Swensen took the helm in the mid-1980s, about 65 percent of the portfolio was allocated to U.S. equities, 15 percent to U.S. bonds, and none to private equity.

Today, U.S. equities, bonds, and cash are less than 10 percent of the endowment’s target asset allocation. Further, companies have raised more money in private markets than in public markets in each year since 2009.

Join the AMA & get your questions in! 👇

Is private equity in for a rough ride?

There is a strong negative correlation between the average price paid for businesses and subsequent PMEs in the buyout business. Multiples in 2019 were at a record. This concern is partially mitigated by low interest rates.

If inflation can't be brought under control and interest rates do need to rise above neutral as some have suggested, a lot of the old assumptions will be challenged.

Have a read of the full note here 👇

Public to Private Equity in the United States: A Long-Term Look

🔔 How Does X Make Money?

Are you SURE you know how your favourite companies make money?

Who remembers Brexit? Seems like it was a long time ago now, doesn't it? Do you remember the super gonorrhoea we were meant to get? The queues upon queues of people trying to leave or get in or whatever the kooky Remainers had concocted in their heads?