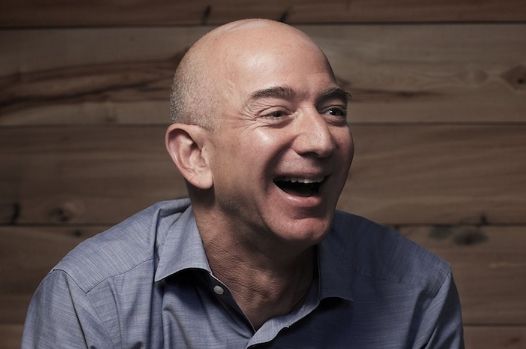 We've had to defend Amazon before... 👇

But we won't be doing that today. You see, it's all their fault...

First up, Macrodesiac partner Syscoin has listed on Huobi & KuCoin!
Get involved & win a share of 100,000 SYS 👇

What did Amazon do wrong?

Double digit growth was within reach, but Amazon messed it up for everyone!

Is that petition to send Bezos to space permanently still open?

Some pretty hard comparisons with 2021's incredible growth and the losses from their Rivian investment had an outsized impact on Amazon's earnings and the index stats as a whole.

If 3.4% is the final percentage for the quarter, it will mark the lowest earnings surprise percentage reported by the index since Q1 2020 (+1.1%).

Amazon's taken a battering post-earnings. Deservedly given the general risk backdrop and commentary in their earnings report. But if you look at a chart like this with that green daily close yesterday...

Then you combine it with this kind of options sentiment...

First up, averages are useful. They can help to get a handle on lots of information, see if things are getting better or worse, that kind of thing.

Here's a perfect example from awealthofcs. The Nasdaq's been obliterated over the past month, losing 13.2%, ("the 12th worst monthly loss on the Nasdaq since its inception in the early-1970s, and now down more than 23% from all-time highs")

Naturally, people are looking to history as a guide to the future...

What usually happens after a seriously bad month in the Nasdaq?

On average, it works out pretty well...

But look at that variance!

How is this useful?!

Everyone knows that major stock indices (at least in the US) generally go up over time. That's why we wrote this 👇

Rhymes with what though?

The historical analogue where your portfolio is down by another 60% in three years, or the one where it's up by 127%?

What we want and what we get are usually two different things...

ICYMI, David's thoughts on the Zero Lower Bound and Fed Policy (starting with the FOMC meeting tomorrow) are here 👇

After the hotter than expected CPI print, a hike seemed likely. The RBA duly delivered right in the sweet spot between 15bps and 40bps.

Some had expected the RBA to wait for the 18th of May wage report, but the RBA's conversations with businesses were enough to seal the deal.

Lowe explained in the conference call that approximately 40% of firms were now approving wage rises above 3%, where previously the trend was 2 to 2.5%.

That was enough for the bank to finally consider the wage growth as 'sustained' and start the hiking cycle.

Unemployment is currently at 4% and the RBA sees it hitting 3.5% at some point this year.

The RBA's forecasts see the cash rate hitting 1.5-1.75% by the end of 2022, and Lowe specifically mentioned 2.5% as a 'normal' interest rate, suggesting that's their best guess at the neutral rate.

The Aussie rallied, but global growth (or lack of it) will probably be the bigger driver for AUD in coming months.

ZLB: How low can you go?

I've kept a keen eye on this little thing known as the Zero Lower Bound since Andy Haldane, then Bank of England Chief Economist, mentioned it...

🔔 A Dovish Hike To Buy The Dip

FOMC meeting later, and the Fed has telegraphed everything they're going to do: Hike by 50bps (0.5%) & announce QT. So why is anyone worried...?