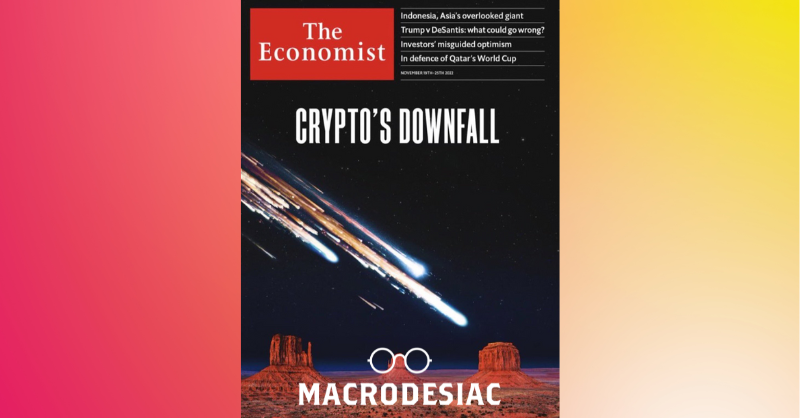 Is this magazine cover a contrarian indicator for crypto?

The magazine cover indicator is back in play for financial markets. This time it's crypto.

Crypto's downfall hit the front page of The Economist on November 19th, leading market commentators to suggest that the crypto bottom might be in. A market reversal must be imminent.

This isn't just market superstition. There's empirical evidence that magazine covers are an excellent contrarian indicator. However, the magazine cover indicator takes time to play out fully and returns are not guaranteed.

Magazine covers as a contrarian indicator - the research

Back in 2016, Citigroup analysts Greg Marks & Brent Donnelly researched Economist magazine covers to see if they were contrarian:

The premise behind the indicator is that when a journalist or editor finally devotes a cover to a market trend, company, country or person, the story or theme has been in vogue for some time and is likely past its peak.

Positioning and sentiment should already fully reflect the story on the cover of the publication and the story should be fully priced in. In other words, by the time a journalist writes about the trend, a majority of the move has already happened.

The analysts chose 44 magazine covers. The criteria was to seek one that was excessively optimistic or pessimistic about a country or financial asset class.

Brent Donnelly re-ran the study in 2021 and the results replicated: Magazine covers are a good reverse indicator

Donnelly added that, on average, the reversal begins almost immediately after the magazine is published.

However, just because bad news is widely known and on the cover of a magazine, that doesn't always mean that a market reversal is imminent.

Back in March 2008, JP Morgan bought out Bear Stearns. Investors bought the dip in bank stocks, many believing the worst was now behind them.

Lehman Brothers shares rallied to almost $50. Everyone knows what happened next. Lehman Brothers collapsed in September 2008 and the Great Financial Crisis began.

Here's how it looked on the XLF (Financials ETF) chart:

Does the contrarian magazine cover indicator matter for crypto?

Yes. But it doesn't mean a new bull market for crypto. In the original study, if the magazine cover was very bearish (and the latest Economist cover might not even qualify for that categorisation) the average return was 18%.

Hardly the kind of annual returns crypto investors are used to.

The magazine cover indicator can simply mean that the bulk of a move is done, and playing for continuation lower isn't the smartest bet.

As always, context is king.

Lows are in for crypto, I read it in a magazine. Don't chase China's bumpy reopening rally and no recession could mean inflation hangs about for longer