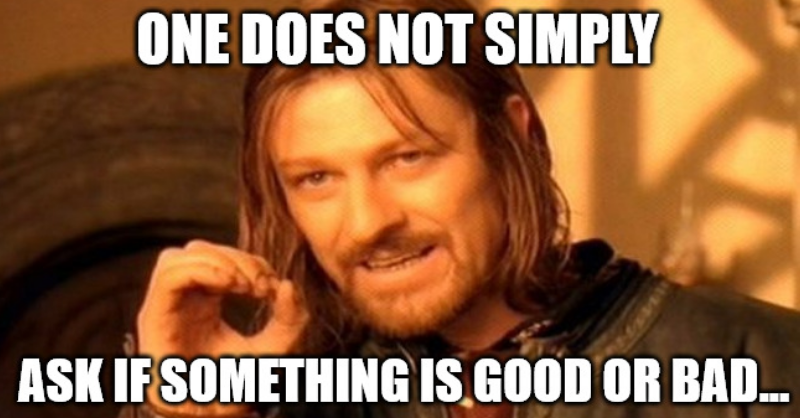 Well? Is it good or bad? A perfectly reasonable question under most circumstances.

Did you win or lose? If you're in America, this is an entirely binary question. Yes or no.

That's because draws (ties) were outlawed by the American sports regulators in 1682, and are punishable by death [citation needed].
If you're elsewhere in the world, there are three potential outcomes from your favourite sporting events. Win, Lose or Draw.

Simple questions like Did you win or lose? Is this good or bad? are fine if you want to know the outcome of a simple event.

But when it comes to more complex topics like markets and the economy, these simple, binary questions are way too narrow.

Take this as an example 👇

Are recessions good or bad?

The reflexive response is that recessions are bad. Our memories associate recessions with suffering, misery and hardship.

Maybe that's 2008 PTSD, when the recession was felt by almost everyone.
But recessions aren't all (or always) bad.

Admittedly, a statement like that needs an example. Let's keep it small for now. 👇

On the personal level, if you keep your job, don't take a pay cut, and your friends and family do similar, you could easily miss the entire recession experience, even though (according to the data) a recession definitely took place...

(If a tree falls in the forest, but there's no-one around to hear it...)

To clarify, recessions aren't a necessary condition of economic theory.

They're necessary in practice to rebalance the excesses that human nature is prone to generating.

Since we started doing this in the 1980s, this was our third episode like this. And there will be more, because people go to excess.
It's the excessive booms that lead to the busts, and it's the busts that give us an opportunity to buy -- I don't think that will ever change. ~Howard Marks

Everything's a matter of perspective. Good or bad doesn't really exist when looking at markets. Those are mere projections of ourselves (and others?) onto the market movie screen. Related 👇

Back to the recessions. There's more than one type. A quick google search brings this up. 👇

Hands up who knows what a 'garden-variety recession' looks like... Be precise.

(Garden variety = not special, ordinary). But in what way?

Mike was calling for an earnings recession back in early 2019 too.

“We are increasingly convinced that consensus earnings expectations for 2019 have further to fall and that the optimistic uptick currently baked into fourth-quarter 2019 estimates is unlikely,” Wilson wrote Monday.
“A modest further decline in earnings will deliver the earnings recession we called for.
Equity returns can still be positive in this environment, but they will likely be weaker than they otherwise would have been.”

And don't forget that recessions come in different shapes as well as types. This isn't a one-size-fits-all. 👇

Which of these recession types and shapes are good, and which are bad?

Covid led to a V-shaped recession. While that was clearly better than the financial disaster we were facing in February/March 2020, it led to an undeniable period of excess. Which then needed to be rebalanced.

And if you want to judge, it depends when you look at it. At the time, the V-shape was unanimously cheered. Now it's less obvious because it's led to ongoing inflation...

See, the critiques of people 'cheering' for a recession need context. From what I've seen, there's a subset of people who believe that the excesses of these past couple of years need to be removed as they're more likely to cause harm longer-term.

Likewise, inflation can be sticky. The general gist is that short-term pain is preferable to inflation becoming structural.

The crypto 'movement' is also a part of their argument, and a brilliant example of how productivity moves throughout an economy.

The GPU's that were being used for mining are now in over-supply. Bitcoin is now roughly at the price of production, and the price drop is seeing people cite the 'positive' energy impact.

It's an oversimplification, but definitely part of the 'recession will be good' crowd's thinking. Basically, they argue that less crypto = more energy (and creativity) can be directed to real world stuff.

And maybe that's right. For now at least.

Clearly, some of those people will be devastated to lose their jobs in crypto. Others were only in it for the growth, so it's the perfect time to move on.

It sounds cruel and heartless to reduce peoples individual experiences like this. Especially in a world where all suffering is evil. But it's not personal, nor is it unique to them. Almost all of us will go through our own versions of hardship and struggle at some point.

"This too shall pass"

And it usually does. These cycles of innovation, hardship and rebirth created the world we inhabit today.

Like Howard Marks, I think they'll continue to do so. The exact same process happens constantly in nature, and is necessary for the survival of every species 👇

Thousands of markets are available to trade with Macrodesiac Partner capital.com 👇

Howard Marks is an absolute legend. If you want to understand cycles, risk, and why forecasts are BS, he's the God-like investor you need

Euro in freefall, Germany panicking. ECB meeting on July 21st is crucial, but it's not looking hopeful...