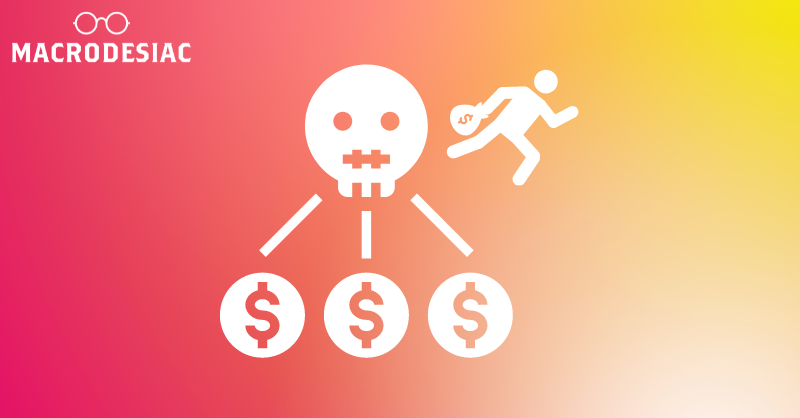 To the extent that any asset or system (such as the stock market) depends on new money entering in order to increase in price, it can look like a ponzi scheme. But is that the full story?

First up, the definition...

“A Ponzi scheme is a fraudulent investing scam promising high rates of return with little risk to investors. It generates returns for earlier investors with money taken from later investors. It is similar to a pyramid scheme, in that both are based on using new investors' funds to pay the earlier backers”

Ponzi scheme: The term was coined for Charles Ponzi, an Italian businessman, who, in 1920s America offered investors fabulous rates of return. The hook was s trade in foreign postal coupons that were exchangeable into postage stamps at a discounted rates to the stamps face value.

Ponzi offered his customers short-dated bonds that carried rewards ranging from 50% to 100%, over periods of 45 to 90 days.

The postal coupon and stamp arbitrage generated just a fraction of those purported returns, but by then Ponzi had worked out that he could pay the existing investors out of the funds new clients put into the scheme.

As news of the fantastic returns Ponzi was generating spread along the east coast, there was no shortage of takers, and thousands of would-be investors were said to have flocked to his office at 27 School Street Boston.

In Ponzi's own words:

“A huge line of investors, four abreast, stretched from the City Hall Annex . . . all the way to my office!”

“Hope and greed could be read in everybody's countenance. Guessed from the wads of money nervously clutched and waved by thousands of outstretched fists!”

“To the crowd there assembled, I was the realization of their dreams, the 'wizard' who could turn a pauper into a millionaire overnight!”

It's often said (at least by me) that a fool and his money are soon parted and that was certainly the case for those that beat a path to Ponzi’s door.

“Ponzi started his scheme on December 26th. Precisely seven months later, on July 26th, at the insistence of the Massachusetts District Attorney, Ponzi quit accepting deposits from new investors. It was estimated that Ponzi had been taking in $200,000 a day of new investments prior to the halt. At that point, he had already collected almost $10,000,000 from about 10,000 investors”

So is the stock market a Ponzi scheme?

I would argue that it isn’t, not least because the stock market is actually a market of stocks that provide investors with the opportunity of choice and diversification, rather than having all their eggs in one basket.

Stock selection and asset allocation can make all the difference to an investor's returns.

Ponzi schemes are by design shit or bust affairs that rely on the greater fool theory for their survival. The pool of greater fools is finite, or at least the pool of accessible greater fools, with funds, is finite. (Though social media and social trading have grown the total addressable market significantly).

The size and availability of this pool of greater fools is typically the weak spot of any Ponzi scheme. If the pipeline of new investors dries up then the game is over, with a predictable outcome 👇

Now of course we can't pretend that some corners of the equity markets, and others, in recent years haven't had many of the characteristics of Ponzi schemes.

Think about meme stocks and the way that some of these rose, phoenix-like from their own ashes, thanks to a horde of irrational retail traders (and a few savvy funds).

Another example of this would be the flood of funds into Cathie Wood’s ARK Investments even as the main holdings in her funds cratered.

Of course, we only need to run a basic search on Google to discover a stream of malfeasance and fraud in the world of cryptocurrencies. Including what looks like becoming the biggest Ponzi scheme ever: FTX /Alameda, which was overseen by Sam Bankman Fried and his acolytes (including Sam Trabucco who seems to have happily sailed off into the sunset).

Stock markets were originally formed to allow businesses to raise capital with which to grow their enterprise. Equity investors provided capital in return for a share of future profits and prosperity.

The former usually came their way in the form of dividends, as and when the company made profits.

Prosperity or wealth creation would also be delivered through capital appreciation in the stock price as other investors decided that they wanted a piece of the action too.

The more the company outperformed in terms of profits, and the longer it did so, the bigger the share price appreciation (rise in value of the business) should be.

Over recent years some of these relationships have broken down, particularly with the emergence of so-called growth companies. These enterprises focus on expanding the top line - i.e. sales and revenues - without worrying about the bottom line or profitability at all.

Many of these “growth stocks” have bypassed the stock market entirely when it comes to raising risk capital, turning instead to private equity and venture capital investors.

The VCs have provided hundreds of billions of dollars of funding for these businesses, far more than they were likely to have raised had they pursued a listing instead.

When these unicorns do come to IPO they are often well-established businesses, though in many (most?) cases they are still unprofitable. And, instead of raising fresh cash for expansion, an IPO may simply be a vehicle to allow the VC backers to cash in.

To do that the company and its backers must persuade investors of the upside of their business and its model, or in other words, must find a greater fool ......

On balance then I think we would have to say that whilst stock markets are not designed Ponzi schemes, certain sectors and participants in them, exhibit Ponzi-like traits.

But these can only exist and prosper if investors let them, and that only happens when FOMO overrides prudence and due diligence.

Sending that yield curve back to positive territory, the ultimate recessionary indicator.

💵 Why is the dollar so weak?

Judging by my DM's, there's some confusion about why the dollar has been tracking weaker lately. All we need is the dollar smile