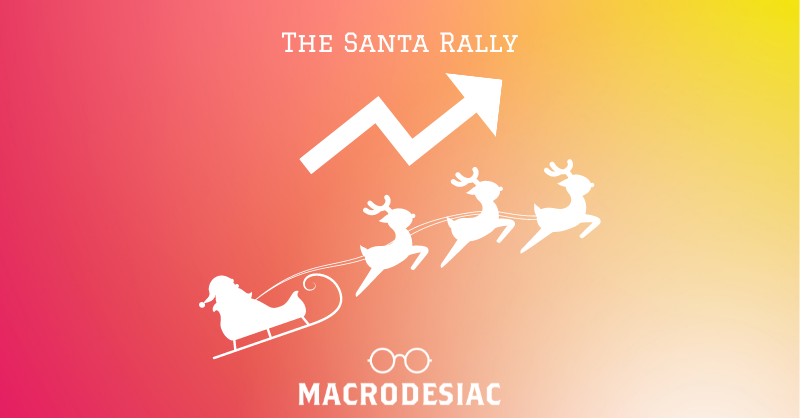 Is The Santa Rally Real?

Do you know about the Santa Rally in stock markets?

Also known as the Santa Claus Rally, this phenomenon occurs during the last five days of December and first two days of January. During this period, stock market performance often improves.

This seasonal rally has been recorded since at least 1972. It's reported that over the past five decades, the Santa Rally increased stock prices an average of 1% and the Stock Trader's Almanac (2019) says the average rise since 1950 is 1.3%!

But does the Santa Rally actually occur, or is it a false narrative?

The Santa Rally as described above does sound like a bit of a media spin.

There's many things to consider...

How costly is it to trade during the period of the Santa Rally when there are fewer participants and therefore, less liquidity?

Many analysts argue that the Santa Rally isn't real and merely reflects seasonal patterns in market behaviour, directly related to the mechanics of portfolio management.

For example, some argue that since investors might need to close out some of their positions at year-end and rotate into underweight stocks or sectors, they could drive up stock prices at the same time. This could be a case of the Santa Rally being a self-fulfilling prophecy with some losing and some gaining...

The problem is that there are many barometers to measure the Santa Rally by...

For example, some define the Santa Rally (falsely, and especially in the media) as the entirety of December which makes historical reporting on the phenomenon of the Santa Rally a little distorted.

If you are therefore taking a quant perspective to look at whether a Santa Rally is valid, it's important to conduct your own research.

How long does the Santa Rally Last?

The Santa Rally takes place over seven days at the end of each year. The five trading days after Christmas, and the first two trading days of the following year.

In our view, it is more likely the Santa Rally is indeed a case of a self fulfilling prophecy, where investors are caught in a game of specific portfolio restructuring towards the year end that is largely dependent on market conditions at the time, but it doesn't mean there is any less value in the signal.

So let's look at some very basic stats to measure whether we have a valid Santa Rally signal for this year.

This is from LPL Research who have already gone through the lovely effort of filtering the data for us!

Over the past 20 years, the Santa Rally has occurred about 78% of the time. In 2021, we had a Santa Rally as well, where the market rallied approximately 1.26% between Monday December 27th and Tuesday Jan 4th.

(This is not shown in the table above)

But then what if we add some context in?

Below are the Santa Rallies which didn't work, overlaid with interest rates.

Noticeably, when interest rates are rising, we are in financial meltdown (2007) or they are very soon expected to rise (2014), the Santa Rally does not work.

With the economic headwinds, and central banks not wanting to pause on interest rate hikes just yet, I think the chances of a Santa Rally are less for 2022.

That does not mean a Santa Rally won't happen though.

But right now, there is another plumbing issue that might affect the rally!

Will the dollar put the brakes on the Santa Rally?

The dollar is a very important factor in whether we see a Santa Rally, specifically because of the time of year.

Below is the Secured Overnight Financing Rate (SOFR).

This is the rate at which banks lend to each other at on an overnight basis, and is the US replacement for LIBOR.

Currently, the cost of borrowing USD is very high, which shows a desire for banks and other financial institutions to hold dollars.

We spoke about the importance of the dollar a while back in the below article.

Unless the liquidity in the dollar market eases, it is unlikely we will see any strong upward trend in stock markets for a while.

The fact of the matter is, from a trading perspective, the edge in the market is currently with selling risk on rallies.

So whether we get a Santa Rally or not, the better bet is remaining in sell mode.

Lows are in for crypto, I read it in a magazine. Don't chase China's bumpy reopening rally and no recession could mean inflation hangs about for longer

Banks and research firms are publishing their 2023 outlooks. A soft landing and a strong US economy, or the S&P500 to 3,000 as company earnings take a big hit?