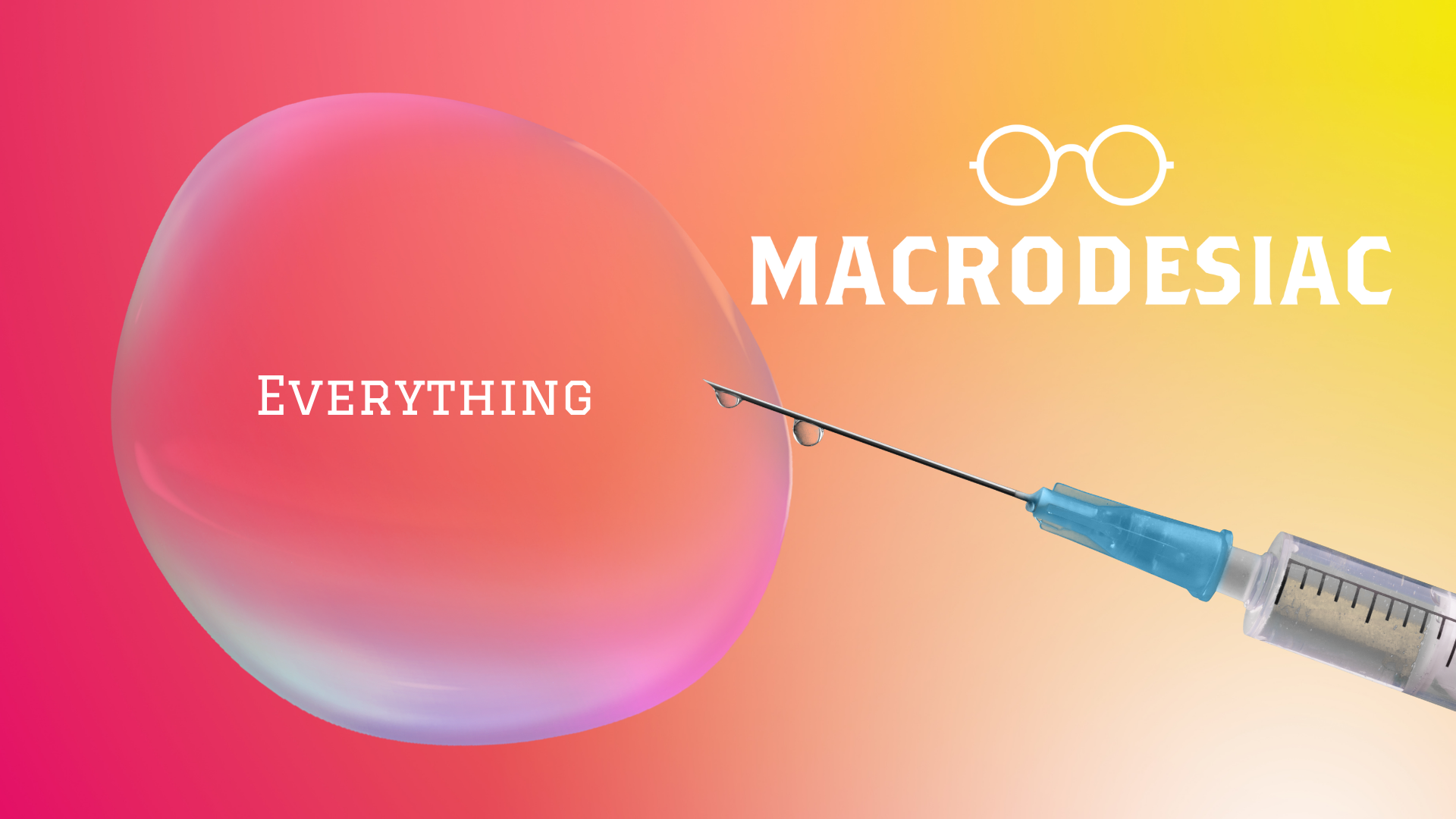 All you should care about are interest rates

I think the picture above is quite ironic.

Stocks being killed by the injection that caused it.

Y'know, I quite like the video below to explain, well, everything to do with markets...

Interest rates up = stocks on aggregate (i.e indices) get hit.

At the end of the day, the market is a weighing mechanism.

'How much heavier is the opportunity cost of holding my ballsy big bags of stocks when interest rates go higher?'

As we've seen with the COVID pandemic, share prices rarely have anything to do with underlying fundamentals.

The fundamentals simply guide where rates might go, and we, before any decisions are made, are weighing up the potential for getting in on the action before action is made.

I love this piece from Howard Marks called 'Thinking About Macro.'

Essentially, he thinks it's all bullshit.

He does, in fact, end up being a bit wrong, but it's all timeframe dependent (he's in it for the longer haul than you or I, probably).

But this segment, which I've quoted many times, is very key...

Today, we hear people say everything’s in a bubble.  Again, I consider the prices of most assets to be fair relative to each other.

To me, that seems fair relative to the yield of roughly 1.25% on the 10-year Treasury note.  If the p/e ratio were at the post-World War II average of 16, that would imply an earnings yield of 6.7%, which would appear too high relative to the 10-year.

That tells me asset prices are reasonable relative to interest rates.

Sure, he was wrong at the time (and only by looking back in hindsight) by saying...

I consider it reasonable for investors to give a nod to the possibility of higher inflation, but not to significantly invert asset allocations in response to macro expectations that may or may not prove accurate.

...but this is the right view to take.

Many at the time were saying we're headed for hyperinflation, that long term inflation expectations were going to become obscenely unanchored.

Yes, they are higher currently, but this is not what the long run is likely to actually be, and no where near levels of hyperinflation.

And the market's measure of inflation expectations (5y breakeven inflation) is not particularly suggesting any kind of sustained inflationary pressure over the horizon at which consumers are really bad at predicting inflation (recency bias).

So back to the main point...

All you should care about are interest rates.

See, I've got a weird feeling in my plums...

...that we are at, or at least very near to the neutral rate.

By the way, let me remind you this is a plums feeling and not academic, but here's a chart to make it more believable.

Then contrast with this chart - don't worry, I'll explain where I'm going with this.

So the neutral rate is defined as...

the real (net of inflation) interest rate that supports the economy at full employment/maximum output while keeping inflation constant.

Does a >100% jump in startup layoffs in a month look like full employment is being kept at a maximum to you?

It sure doesn't to me.

Granted, we are looking at a sector that is high growth and therefore susceptible to higher rates...

But even when you drill down a little more, the picture doesn't look too pretty...

These are big 'startups' and they're dropping staff with haste blud.

These are the times at which we start to see broader shifts.

There's been a lot spoken about massive job openings, but it doesn't feel like these are going to be filled any time soon...

And you can slowly start to see how things are going with headlines like these...

Companies like PayPal and Netflix are even in on the lay offs...

And firms like Gorillas and Klarna are literally slap bang in the middle of dumping their employees.

Now this points to one thing - that the consumer is slowing down, but also that firms who are indeed high growth and rely on low interest rates are feeling the pinch, and if they're feeling it here, then a 50bp increase is going to make them even more uneasy...

Yes, this is small scale right now, but it feels like the scene is set where we are going to move away from full employment to get inflation down again.

The mechanism here is that if we move away from the Fed's full employment measure, we are shifting away from the production possibility frontier...

...which is essentially showing a GDP contraction.

This is why I was averse to saying that the negative Q1 GDP print was simply a misnomer.

People don't deep dive into data like we do in the financial world.

The general public might have seen this and felt it compounded their thoughts on the economy, causing an instant 'cutting back' on luxuries.

So my base case remains the same as I mentioned a little while ago...

The Fed are concerned about inflation, but they are moving into restrictive territory rather than approaching neutral to combat said inflation.

I would argue they use 'neutral' so they don't cause panic whilst pushing as far away from the zero lower bound (as outlined in the above article) as possible.

I would not be surprised to see misses going forward in the unemployment measure over the next few months.

Yes, contrarian, apparently - but not illogical.

New home sales freaked everyone out, but this is EXACTLY what the Fed wants. September pivot?