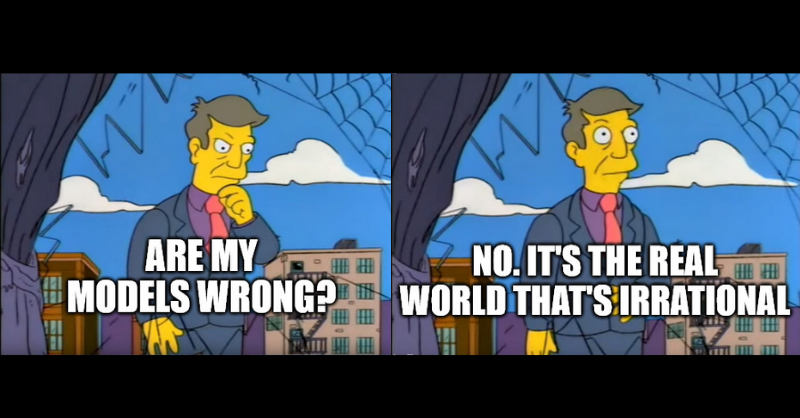 "The Truth About Inflation is complex—a subject worthy of an entire book" - Paul Donovan, UBS

And that truth is something I keep coming back to (but not gonna write a book about it.... Who would buy that?). This enormous wave of absolutism about inflation.

It's all about the headlines. There's very little attention being paid to the nuances. Few attempts to apply context.

I get it. As loyal financial market participants, all we care about is what our monetary overlords (known colloquially as "the Fed") care about.

If Fed thinks that inflation is too high, rates go up. That influences everything else. Higher rates are toxic for higher risk/beta. Nobody cares about The Merge™ or Ether as a commodity-linked bond with an intrinsic yield when the Fed's in command.

Anyway, in the real world, everyone experiences inflation differently. And Paul Donovan has actually written a book called The Truth About Inflation.

Published in 2015 way before inflation properly kicked off in the post-Covid era, this section is as relevant today as ever (and applies to more than just inflation) 👇

The amateur and unqualified economic pundit of the investment blog writes about consumer price inflation without actually grasping either its composition or its purpose.

Business television channels want a simple, single-line graph that they can post on screen for thirty seconds, not a complex mass of numbers that are hedged with qualifications and ‘yes, but…’ caveats at every turning point. Our understanding of inflation is not helped by a world increasingly dominated by ‘sound-bite economics’.

See, the real world is full of "yes, but". Have a look at this from Paul's Wednesday note (emphasis is mine) 👇

Regional inflation variations are unusually large. Overall inflation in New York and San Francisco is roughly half that of Phoenix. New car prices rose 6.1% in Los Angeles, but nearly 33% in Baltimore. Clothes prices fell sharply in Seattle, but rose rapidly in Detroit. This is a more complex picture than “CPI up, rates up”. The fact that financial centres have lower inflation might bias market perceptions.

UK inflation data slowed a little more than expected in August. Even with the government’s latest price caps, energy prices will add to inflation in the coming months—but fear of those price increases has softened demand, squeezing profit margins that underpin inflation.

Pick the pieces out of that.

Then there's the arguments over who suffers most with inflation. You'll often hear that "it hits the poor hardest".

Pay gains also varied dramatically across industries.
Workers in the leisure and hospitality sector — among the hardest hit by lockdowns — have seen wages climb 12.1% over the past year, according to ADP.

Soooo, not those poor. It must be the other ones then. Meanwhile, all the rich people are profiting, right?

Unless they've lent anyone money...

An immediate consequence of an unanticipated change in the price level is wealth redistribution: inflation lowers the real value of nominal assets and liabilities and thereby redistributes wealth from lenders to borrowers

Maybe it doesn't hit the poor hardest after all? All a matter of perspective and individual circumstances.

Then there's the mythical inflation expectations... They're well-anchored. Central banks regularly ask people what they expect and they say it's all transitory. Nothing to worry about! 👇

Meanwhile, out in the real world...

Rail workers have gone three years without a raise amid a contract dispute, while rail companies have recorded robust profits.

In the current talks, the industry has offered annual wage increases from 2020 to 2024, equal to a 24% compounded hike.

In Europe and South America, the FT reports an increasing trend towards inflation indexed pay...

In Spain, where annual inflation in August was 10.5 per cent and electricity bills are up by 70 per cent over the same period, unions are winning negotiations for more of their members’ contracts to be indexed to prices.

Such contracts already cover almost a third of Spanish collective wage agreements, up from less than a fifth at the end of 2021, and are expected to reach half next year, according to the country’s central bank.

If inflation expectations are truly well-anchored, why are these pay rises being demanded by workers, and, more importantly, agreed to by companies...?

But there's a little hint that the EU trend was already tending towards higher wage growth even before Covid hit. Here's a chart of EU wage growth with my terrible scribblings over the top...

Still better than 90% of the technical analysis out there. 😎 Seriously though, there was a clear shift around 2016. The post-GFC stagnation gave way to a gradual shift higher.

And, given the worker shortage, why couldn't it continue? Maybe it will, maybe it won't. Central banks are tightening while governments are attempting to shield economies from the impact. Anything could happen. 👇

But beware the flawed logic and models. Even under stable circumstances a lot of the conclusions are dubious (if we're being generous).

The only guide you need 👇

Great business you have there, does it actually make any money?