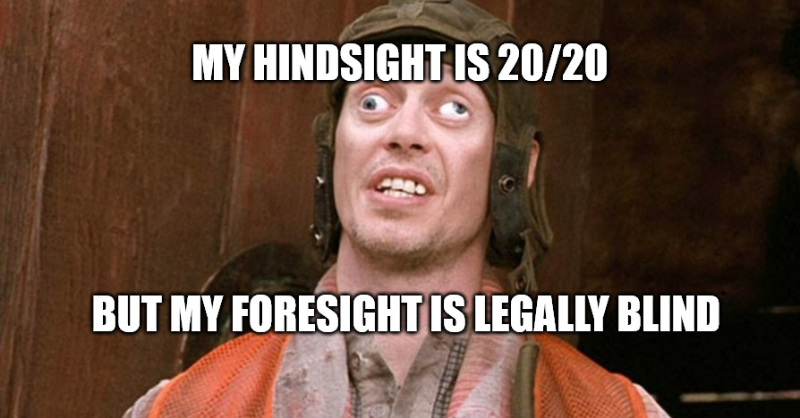 Inflation's all the central banks fault. Any idiot could see this would happen. It's time to play The Blame Game™ 👇

Yep, the professional blame deflectors (MP's), clout-chasers and other attention seekers are claiming that everybody knew this would happen. If only the central bank had acted sooner. Idiots.

The key to this little pantomime is that there's some truth in the criticism.

Liam Fox, a former cabinet minister, told the Commons that the BoE had “consistently underestimated the threat” of rising inflation, which the BoE fears could top 10 per cent later this year.

“The BoE persisted beyond any rational interpretation of the data to tell us that inflation was transient, then that it would peak at 5 per cent,” he said.

And he's right. They did underestimate it, and they stuck with transitory for a lot longer than was reasonable. Therefore, an investigation must be held... to confirm what we already know!

One member of the government said that the BoE had “got it completely wrong at every single moment of this crisis” and it should have “obviously” tightened monetary policy sooner.

The person added that BoE governor Andrew Bailey said inflation was going to be temporary while “every single fund manager in the City knew that wasn’t true”.

Meanwhile, Robert Jenrick, a former Tory Treasury minister, told the FT: “The BoE missed the opportunity to gain control over inflation last year, arguing that it would be modest and transitory when it was clear to many of us that it would be high and longstanding”.

Ah, it was all soooo obvious! Everyone knew except the Bank of England...!

The very same Robert Jenrick went on Sky News on the 27th of October 2021 to say exactly th... Hang on a second, this can't be right! 👇

"We just don't know what the future holds".

Most economists in the Square Mile have cut the odds of a rate rise in response to the working from home directive issued by Downing Street.
A dramatic slowdown in the UK’s GDP growth in October to just 0.1% – amid flagging business and consumer confidence before the government’s restrictions – is another factor that could weigh against a rate rise.

The BoE hiked anyway. Only a bit, but they hiked. It was reported as taking an interest rate 'gamble'.

And they were so far behind the curve that they were actually first... 👇

Yep. Those same politicians would've laid into the central bank for hiking just as the economy was "in the grip" of omicron uncertainty. And blamed them for causing a recession if omicron had hit the economy more seriously while they were hiking.

But now, we're to believe it was always crystal clear and they should've hiked sooner...

With the benefit of hindsight, it's all so obvious and politicians love to play the hindsight game.

Hindsight bias, the tendency, upon learning an outcome of an event—such as an experiment, a sporting event, a military decision, or a political election—to overestimate one's ability to have foreseen the outcome.
It is colloquially known as the “I knew it all along phenomenon.”

That said, there were plenty of people raising the alarm about inflation persisting last year, and some even called it back in April 2020, when the pandemic was in full swing... 👇

A CRAZY BUT LOGICAL CALL FOR STAGFLATION

The full note is here, and still worth a read over two years later. 👇

Which does make you wonder if all of this was sort of, inevitable anyway.

Perhaps, once the pandemic policy was established & that snowball started to roll in March 2020, this was always going to happen and there was little any central bank could've done to prevent it.

The Ukraine invasion just added more fuel to a fire that was already burning...

With the benefit of hindsight of course.

I'm no monetarist, nor a follower of any single school of economics. But I am seriously cool. And all of the cool kids are reading The Essential Hayek and noticing a few things that apply... 👇

The bad effects of more inflation today won’t materialize until sometime in the future, when many of today’s officials will be out of office.

So officials in office today can, by keeping the money supply growing, make
the economy appear to be healthier than it really is, while the costs of creating this illusion will be borne only in the future by mostly different officials.

And that's what's been happening, as everyone (or everyone paying attention?) knows. Which means there's always money available for vote-chasing politicians to spend...

Expanding the money supply and/or excessively lowering interest rates (directly or via QE) distorts economic pricing signals, and sends money flowing into assets such as housing, largely benefiting a rentier class, which is partly why crypto was born.

As the author notes:

This political bias in favour of inflation is the chief reason justifying arrangements that strictly regulate changes in the supply of money.

Returning to the gold standard is one option. Alternatively, the economist Milton Friedman famously proposed a “monetary rule” that would prohibit central banks from expanding the money supply beyond some very small amount (say, by no more than three percent annually).

Hayek himself came to favour denationalization of money—that is, getting government completely out of the business of issuing money and controlling the money supply.

Competitive market forces would instead be responsible for supplying sound money. (Friedman himself, just before he died, became so skeptical of central banks that he argued that government be stripped of any power and responsibility to regulate the supply of money.)

Whatever the particular method used to eliminate political discretion over the money supply, eliminating such discretion should be among the highest priorities for those who seek an economy geared to solid, sustainable, and widespread economic growth.

Once all is said and done, will the Fed miss their soft(ish) landing?

The best case scenario is a slowdown, the worst case is a recession. And what then? More of the same? QE & low rates forever, unaffordable housing? Global Japanification?

What will the backlash be?

Or will we eventually see a new monetary/fiscal system rise up? A system more focused on economic allocation than exponential expansion?

Sadly, I don't see it happening any time soon.

Then again, I also thought inflation was going to be transitory. So maybe there's still hope...

Move fast and break things is the Fed's new mantra. How far will the collateral damage extend once the dust settles? Tech giants? China? The euro?

PROFIT isn't a dirty word. It's an essential cog in the global economy. Stick your windfall tax up your a*se