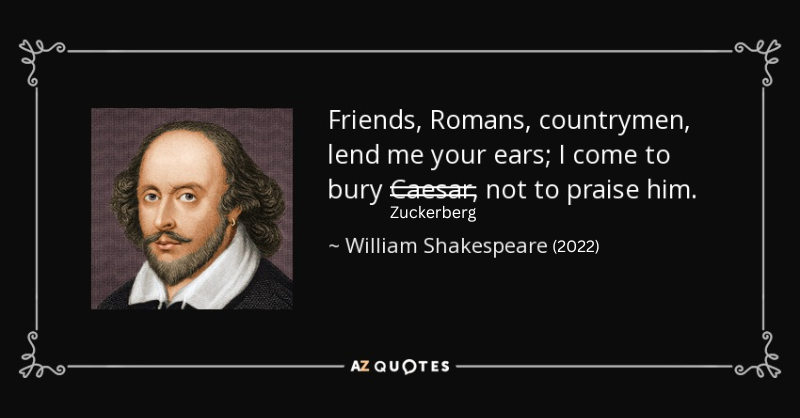 The Veteran's predicted Facebook weakness since the pre-Meta days. Now it's all falling apart for the Zuck. Can he turn it around? 👇

Meta Platforms, the owner of Facebook reported earnings after the close and they REALLY weren't good. It wasn't just the headline numbers, (though they were bad enough). Instead, it was the negative swing in the underlying business itself that did the damage. Falling revenue and sky-rocketing costs were of particular concern.

And when I say damage I mean a -20% fall in the company’s stock price after hours, on top of the -5.59% it suffered in the regular session on Wednesday.

Of course, these kinds of price declines rarely (if ever) happen overnight.

A look at the two-year percentage change chart of Meta vs the S&P 500 shows that the stock has effectively underperformed the broad-based index by -64.0% in that time frame.

Was it possible to have predicted the decline and fall of Meta/Facebook?

Well, I would suggest it was.

And indeed I would go further, and say that I did just that in this video I scripted back in 2021 👇

Massive selling by the CEO and a seismic but under-appreciated change in the firm's core market (which it could do very little about) were all clear sell signals...

Empires rise and fall (hence my paraphrasing of lines from Shakespeare’s Julius Caesar in the title). Stocks do the same and it seems to me that Meta may have crossed its own rubicon here.

We have to go back further in time for my next exhibit (back to 2014 in fact) which is taken from my favourite piece of research ever: JPM AM's Agony and the Ecstasy, part of the firm's regular eye on the market series.

This report was written to persuade concentrated stockholders and founders to diversify their investments. However, in doing so it also shone a light on the lifecycle of the typical or average US-listed stock. 👇

The sobering conclusion of the report was that 40% of listed US equities would, during their lifetime, suffer a catastrophic price loss of -70% or more from their peak, from which they would never recover.

What's more, the failure rate for the information technology sector was up at 57%.

At this point, you will probably point to the paper fortunes that some entrepreneurs have made by being heavily invested in a single stock.

However, the JPM AM research also considered that possibility and found that:

Coming back to Meta Platforms these slides from their Q3 earnings presentation clearly show us where the issues lie.

If we look at expenditures, costs have been rising in absolute terms, but crucially, also as a percentage of the firm’s revenues. Costs are now equivalent to 80% of the top line. 😬

And of course, that means a hit to earnings...

Can Meta Platforms rebound from these setbacks?

As we have seen above, history suggests not. Nor does it seem likely that the firms pivot toward the metaverse will be its saviour...

Palmer Lucky (founder of Oculus VR which was acquired by Facebook for $2 billion in 2014) was less than complimentary about Meta’s Horizon Worlds metaverse project, saying:

“It’s not good, it’s not fun…Most people on the team would agree it’s not a good product”

He added that the foray into the Metaverse was like Mr Zuckerberg's “project car”:

“An incredibly expensive hobby that you ultimately lose money on”

Mr Lucky (what a name!) hasn't given up on the Metaverse and Meta Platforms completely however...

“It is terrible today, but it could be amazing in the future,” “Zuckerberg will put the money in to do it. They’re in the best position of anyone to win in the long run.”

However, they (Meta) may not get the opportunity to generate and spend that money from their advertising business.

Whilst this new version of Apple's software provides advertisers with a greater degree of flexibility in tracking and targeting Apple users it does so in such a way as to further boost Apple revenues whilst limiting those for Facebook and other advertisers.

Specifically, the rule that Social Media apps must use Apple’s in-app payment system on Apple devices means that Apple will earn a hefty commission if for example, an advertiser pays to boost a social media post on say Instagram or chooses to fund an advertising campaign on Facebook via an Apple device.

Given that Apple is the go-to tech for marketers and creatives the world over that could be a real problem for Meta platforms going forward.

How long I wonder before an activist investor comes knocking on the Meta Platforms door?

Perhaps suggesting that Instagram, Facebook and Whats App are sold off or spun out into separate businesses that might be able to strike up more cordial teams with Apple and Alphabet, who are effectively the gatekeepers of the online advertising world...

🔔 Germany & China Sitting In A Tree

K.I.S.S.I.N XI. Germany's getting closer to China just as the US turns away.

Windfall taxes are top of mind, but where will the money go and what problems will it solve?