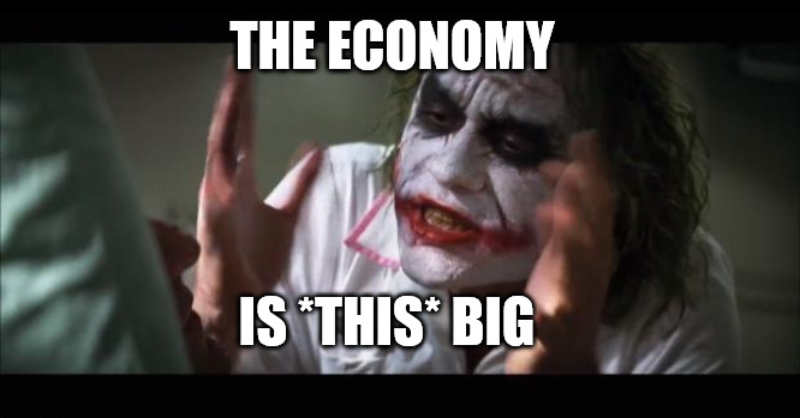 🔔 How To Accurately Measure An Economy

We've had several chats recently on the Macrodesiac discord about the benefits (or otherwise) of capitalism and command economies, especially the failings and excesses associated with both economic philosophies.

It's clear that neither system is perfect. To date, there hasn't been a successful example of a real communist society/command economy where productive abilities are matched with wants and needs.

Human beings are not capable of anticipating future events with any degree of accuracy, except perhaps in the very short-term, and even then there are question marks about our ability to do that consistently.

(Think random walks versus efficient markets and passive versus active investing, and compare the relative returns of the two styles, all of which are fruitful topics for articles in their own right)

Trying to forecast far into the future is a thankless task. When you do so, you encounter a kind of economic uncertainty principle.

One of the tenets of quantum mechanics that was proposed by Werner Heisenberg in 1927, states that we can know either the position or speed of a particle with a degree of accuracy, but we can't know both simultaneously.

The same is true for economies. On that basis the five year plans of command economies were doomed from the outset.

Capitalism hasn't done that much better if we are honest. (And we should be honest!)

Although many of us in developed economies have prospered under free market liberalism, it's becoming increasingly clear that our prosperity has often been delivered with hidden costs.

Much of it has come at the expense of those in the developing world, the planet and environment, and more recently those within our societies who, for various reasons, have fewer opportunities.

Income inequality in the UK: The EqualityTrust 👇

The free market is the most efficient allocator of resources that we have identified to this point in human history. However it's far from perfect, and in truth, it may not even be that efficient or indeed fit for purpose in the modern world, which is what we can infer from the chart above.

One could argue that it's not the free market that's wrong but rather the mandate that it operates under. In particular the relentless pursuit of growth, and/or growth at all costs.

Perhaps we need to move the goal posts and amend the rules and objectives rather than abandon the game entirely.

One place to start would be the tools and indicators we use to measure performance. First among these would be GDP, and in particular, GDP growth.

GDP or Gross Domestic Product measures the output and economic activity in an economy but doesn't take any other factors into account as such.

Demographics are a big part of GDP. Consider that GDP is a measure of the following:

As a population ages (or shrinks), it becomes increasingly hard for that GDP number to increase. Less people participating in the economy means productivity per worker must increase or the 'GDP' economy shrinks.

It's a very narrow tool and one that looks increasingly outmoded in a world where sustainability will be inherent to our continued survival and standard of living.

So what alternative measures of prosperity and well-being are available to us?

Here are some suggestions:

I am not sure that any of these alternatives are the perfect replacement for GDP or even if they could become the new mandate for our economic goals, but there is a lot to be said for a metric that considers the well-being of the overall economy and the individuals within it.

On that basis, I am drawn to both GPI and the Well-Being Index which could perhaps form the basis of our new economic mandate if, for example, they were able to capture concepts such as sustainability and carbon footprints.

However, to implement a new indicator, we need to change our thinking and move away from blatant consumerism and a culture of target chasing at the expense of all else and that can't happen unilaterally.

And of course, it would be very difficult to persuade the developing world to stop being aspirational, especially when those aspirations are often basic needs that we take for granted such as food, water, shelter, electricity and access to the internet.

Perfect example of this sentiment here 👇

Levelling up has become a controversial phrase in the UK but perhaps what we need to embrace is the concept of averaging down to create an economy and society where everyone has what they need rather than what they crave?

Clearly, there are some 'branding issues' with the idea of averaging down. We'll follow up on these in part 2 tomorrow.

🔔 The New Economy: For Better Or Worse

A brand new world: redefining economic growth, the truth about the WEF, and nudgenomics