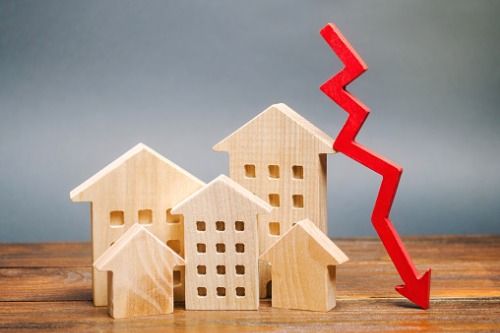 🔔 Housing Is The Key To Slowing Inflation

I spent the weekend thinking about the housing market. Annoyingly, once a seed takes root in my mind it's going nowhere until it's fully grown.

That seed started out as "What's the biggest risk for the Fed/inflation?"

That's a summary of the last Employment Cost Index. You get the gist from the headline.

I wrote about the significance of the ECI in current context back in January:

The increases from the previous two quarters at 1% and 0.9% were already at the high end of ‘normal’ for the past decade. In isolation, those two prints could probably be explained away by economic ‘re-opening’.

Q3 was a whole new level!

Usually this isn’t an important data point. Released quarterly, it’s been pretty stable and boring either side of 0.6% for the past 10 years.

In the current market context, the ECI is right in the market spotlight 👇

And it will be again on Friday (even though it's not marked as high impact on a lot of calendars).

Summing up, the dreaded wage/price spiral is THE big risk.

What's that got to do with housing?

Basically, the price of everyone's biggest expense/outlay is going up.
And it's going up FAST.

If that's happening to you in a labour market with "1.7 job openings to every unemployed person", and a labour market that's "tight to an unhealthy level"
(as Powell said after the last FOMC in March)...

You grab your boss by the proverbials and demand a pay rise, or you look for a better-paying job. Either way, the goal is the same. Pay me more.

Which is how this happens 👇

"Oh great, not another economic paper"

Don't worry. This one has the best introduction to any economics paper you've ever read. (Yes, I know it's a low bar)

The bad news is that I am not a macro-economist.
Wicksell and Hayek and Keynes and Friedman and Tobin and Lucas and Prescott speak foreign languages with which I have familiarity but not mastery.

The good news is that I am not a macro-economist.
That frees me from the heavy conceptual burdens that most macro economists seem to carry.
It allows me to conclude that Keynesian thinking, monetarism, rational expectations and real business cycles all suffer from the same problem – too much theory and not enough data.
In particular, none of these comes to grips with the role of housing in modern US recessions.

Glorious. In the paper, Leamer explains how housing starts are an excellent cycle leading indicator 👇

By virtue of its prominence in our recessions, it makes sense for housing to play a prominent role in the conduct of monetary policy.
A modified Taylor Rule would depend on a long-term measure of inflation having little to do with the phase in the cycle, and, in place of Taylor's output gap, housing starts and the change in housing starts, which together form the best forward-looking indicator of the cycle of which I am aware

At the same time, this is happening 👇

The shift from "Prices too high! Something must be done!" to Housing unaffordable" in just four months is pretty epic...

Maybe it's part of the plan...  From February 👇

To slow OER inflation, mortgage rates need to get higher and house prices flat or outright lower. To slow all other services – driven by a shortage of labor –we need more supply of labor, not less demand for it through a recession.

Again, inclusive low unemployment is a political imperative and, by extension, so is redistribution via stronger wage growth.

It's easy to look at all of this and think "something's gonna break, house prices will crash" or just generally panic and freak out.

But this isn't 2008. Yes, housing will be less affordable for new buyers and refinancing, but that doesn't mean everyone who already owns a home is about to get rekt.

Many have locked in mortgages at low fixed rates. Lending standards are far higher. As long as the economy holds up OK, they should have no problems servicing that debt.

What the increase in mortgage rates does achieve though, is to stop house prices from rising further, or at minimum, slow the pace of price increases.

The idea of a soft landing for the Fed is pretty dependent on this transmission working quickly. Reverse the wealth effect enough to slow the economy without taking it too far...

Summing up, the housing market's in for a rough ride. It's a risk but hitting housing is probably the best way for the Fed to get inflation under control sooner rather than later.

The energy-driven slowdown in Europe & the Covid lockdowns in China could also play a role in slowing the global economy. Dynamic as the US economy is, it can't do everything alone.

Disney's up against it: Big Ron's coming for them, the streaming growth engine's in doubt, and they've been given the kiss of death...

🔔 We Don't Talk About Elon

A man bought a thing. He's now our saviour or wants to watch the world burn apparently Private > Public EURUSD: History doesn't repeat, but it rhymes