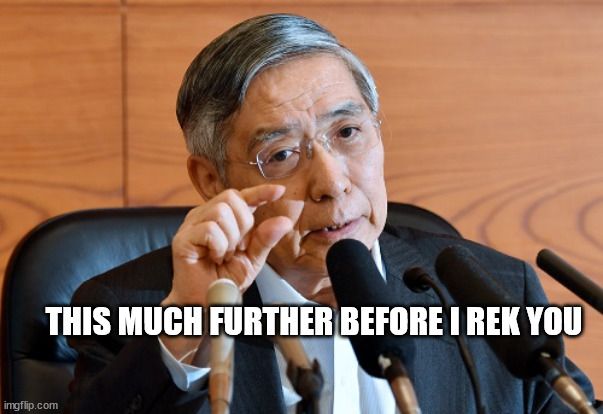 Check out Macrodesiac partner Syscoin and their 2022 Roadmap 👇

Japanese officials are getting very uncomfortable with the recent yen weakness. USDJPY sliced through 128 earlier, and looks set for a move to 130 in no time.

Finance Minister Suzuki repeated his mantra that “Stability is important and sharp currency moves are undesirable”.

Then he took it a step further, questioning the merit of the weak yen policy...

“Weak yen has its merit, but demerit is greater under the current situation where crude oil and raw materials costs are surging globally, while the weak yen boosts import prices, hurting consumers and firms that are unable to pass on costs,”

Suzuki added “We will closely communicate with the U.S. currency authorities to appropriately deal with this issue.” and he'll meet with Janet Yellen on the sidelines of the G20 summit to do just that 👇

Any response is more likely to treat the symptoms rather than the causes, but it suggests that the speed of the recent moves has Japan's Ministry of Finance and the Bank of Japan sufficiently concerned to push back.

Structurally, there's not much they can do other than try and smooth out the volatility.

US yields keep on rising while Japanese yields are stuck below the 0.25% level (the BoJ has already been forced to step in and defend the yield cap), which drives traders to buy USD and sell JPY.

The weak yen is also making imports (even) more expensive, which just makes the problem worse.

Summing up, be on the lookout for further statements or actual intervention in the next few days, and don't be certain it'll be easy to get long from here.

130 is a level that's been flagged as a potential pain point for a while, and US 10y yields (which typically correlate with USDJPY) are also within touching distance of 3%...

Purely sentiment based, two things have caught my eye. Every man and his dog knows about the weak JPY trade (although short positioning isn't stretched).

Does everyone know about the bald guy? 👇

When I see things like this, I wonder how much juice is left in that trade.
Once it's on the "magazine cover"...

Then the carry on BRLJPY was mentioned, and I started to think about Mrs Watanabe's last love affair with Brazil, had a look at the chart and my visual bias kicked in too.

I'm not a big believer in fractals and more work is needed on this (any work is more than a five minute glance at a chart with some added crayons), but I am wondering how much further this pair can extend...

There's been a load of speculation about what Musk is actually doing with Twitter.

Nobody knows, but the number 420 keeps coming up, and what's the date tomorrow?

Anyway this Wednesday is April 20, that is, 4/20, the holiest day of the year for people who can’t stop making weed jokes, like Musk and, now, Twitter. I assume that on Wednesday morning either they will sign a friendly deal, or Musk will launch his tender offer (despite the pill!?).

The above is from the excellent Matt Levine, who will send you a note (Money Stuff) to your inbox every day for free 👇

Annoyingly, it stays behind the BBG paywall if you don't get it sent to your inbox, but BBG usually offer a 1 month trial for 99c. His latest on Twitter's Poison Pill and the mechanics of coercive takeovers is well worth it.

Netflix earnings after the close, and everyone's worried about their guidance.

"It’s inaccurate to even call it a COVID winner anymore... The stock has lagged the QQQ's by (-36%) since COVID began... Additionally, NFLX was first to acknowledge/predict that the subscriber blowout quarters (Q1-Q2 ’20) were a 'pull forward' .."

Netflix has also added close to 40 million subscribers since the pandemic hit, and their average reveue per member increased 7% YoY while they did it...

On top of that, a UK survey found that partly due to the cost of living squeeze, although households were "cancelling their streaming subscriptions in record numbers"  Netflix & Amazon Prime were “the last to go when households are forced to prioritise”.

Summing up, the risk/reward just isn't favourable to short Netflix into earnings.
A lot of bad news (slower subscriber growth, Russia) is already expected.
The stock's already trading at a discount to the other FAANG stocks (even Facebook/Meta ffs) and 50% down from the $700 high.

Barring disaster, Netflix could easily bounce to $425 post-earnings but consumers tightening the purse strings in a slowing global economy could spell trouble down the road.

Narrative: "There's going to be a new monetary system, backed by commodities" Facts: "There isn't, we already tried it, and it sucked" A few things could change though...