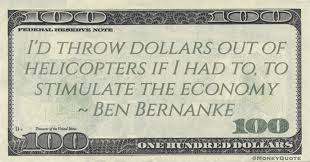 We've all seen this doing the rounds over the past two years or so. 👇

Now inflation's high and everyone's got it all figured out.

Musk, when asked about recent comments about inflation made by fellow billionaire Jeff Bezos, said the rising prices had resulted from simply money printing.

“The honest reason for inflation is that the government printed a zillion amount of more money than it had,” Musk said, adding that countries including Venezuela had already been down the same path.
“This is not like, you know, super complicated.”

Yeah, it's not, like, super simple either, Elon. And we're not even commenting on comparing the US to Venezuela... Just be happy he can build rockets.

Anyway, there's a huge difference between THIS QE and the old QE.

The inflation we're seeing is a mixture of "fiscal transfers" such as the stimmiez, child tax credits, rent relief, tax cuts/forgiveness etc. seen in the US, and to varying degrees elsewhere in the world.

But the BIG difference of this QE vs the old QE is that the government pushed that stimulus directly into the economy.

That met with supply and labour constraints, which pushed prices even higher, and the Ukraine War and Russia's isolation isn't helping now.

That's basically why the old QE regimes weren't inflationary and this one was.

Want proof? Japan's spent (lost) decades in perma-QE mode and inflation has been low throughout, even experiencing outright deflation at various points in time.

It was a similar story in the US, (just without the deflation).
This intro was published in April 2016 👇

You’d think it wouldn’t be so hard to spark a little inflation.

But in recent years, the Federal Reserve has consistently fallen short of its goal of a 2% annual inflation rate, despite the fact that it has kept interest rates at historically low levels, and has maintained trillions of dollars of government debt and mortgage-backed securities on its balance sheet.

But now, the secret's out. Dumbing it right down...

And so, here we are.

We've trialled it once. Just chucked money at everyone and it sort of worked for a bit. Maybe if we try it in more 'regular' times when supply chains are back to normal, and maybe we could target certain areas of the economy instead of dishing it out to everyone...

The idea sounds complicated, but it's really not.

Just send money to households via checks (CHEQUES!), or if we're in the modern world and not using relics from the medieval era, Central Bank Digital Currencies (CBDC's).

Do that in such a way that none of the bad things will happen, like increasing wealth inequality, or financial stability risks.

It could also help redistribute wealth and economic activity in a certain dysfunctional political/currency union just off the shores of the greatest empire the world has ever known. Naming no names...

And regulators haven't let up on the idea. Here's what we said 👇

CBDC's have the potential to be a very powerful monetary and social tool.

They can potentially bypass the snail's pace machinations of government legislators, get money directly into consumers pockets, and into the areas of the economy that need it most.

But who makes those decisions?

Which system will we choose?

One where 'independent' central banks are chasing societal goals?

Or governments and central banks reshaping societies together, abandoning the illusion of independence?

And while we're at it. Why not stop measuring monetary policy success by inflation?

If we're going to start chucking money about, we'll need to target economic growth instead of inflation, right?

Increasing the size, capacity and productivity of the economy as a policy goal instead of targeting inflation (which confuses more money and higher prices with greater wealth) would be a step in the right direction...

Are we supportive of even more economic tinkering by policymakers?

Should policymakers just keep doing things the old way, even though that clearly wasn't working?

Does that make it more likely that policymakers will try something a bit different, drawing on the experiences of the pandemic fiscal boost?

Whatever happens, this is no time to be confident about a return to the old regime of NIRP, ZIRP & infinite QE flowing into asset prices.

CBDC's could be a game-changer for policy (for better or worse).

If we're really lucky, our kids might even be able to afford houses.

It's the hope that kills you.

Misery Index Points To Rising Pain Across The Western World Central Banks: "it's for your own good, we love you, the economy is still growing"

Walmart & Target are down bad, profits slashed, CEO's turning negative... The Veteran's worried about the US consumer