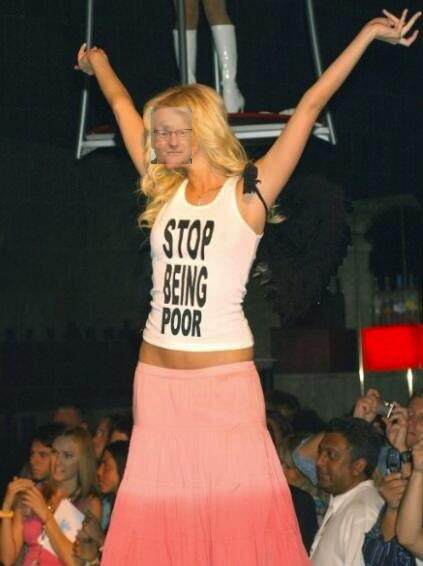 The gig is up.

A central bank has finally admitted that it would really like its young citizens to remain poor.

How do I know this?

Well, it's in this document released by the RBA on the 24th of December.

What a lovely Christmas present.

So what's the score?

It's what I've been talking about for ages.

The RBA reckon that an increase in asset prices generates a wealth effect, which enables people to remortgage their homes and create more credit to then go and spend.

It's pretty ridiculous when you think about it.

These people (who are largely older) are only able to make use of this 'wealth' because they own property - young people don't have the chance to because of this very mechanism.

But all is OK, in the eyes of the RBA.

Monetary stimulus supports employment. For young savers, unemployment has a far greater effect on income than low rates. FHB (First Home Buyers) commitments have increased, which is a positive signal for younger households.

'You've got a job, so you should be happy. And don't worry that we're pumping up the price of housing and largely causing you guys to be sub-prime borrowers. Some of you can even buy a house and be massively leveraged!'

Youth unemployment is the segment in the employment data to be most quickly and aggressively affected during a downturn, and the RBA are patting themselves on the backs by creating a generation with a high debt burden...

...instead of, you know, perhaps stemming the tide a bit, allowing house prices to cool off and focusing their efforts on more productive means of capital allocation in the economy.

And we come back to the same issue all the time.

Regulators, since the GFC (which to be fair to Australia, they fared OK in), have been on the banks' backs, trying to reign in lending standards (i.e, making it harder for people to borrow money)...

So what could be happening here?

The bank of mum and dad

My thoughts are that these first time deposits are coming from parents.

Those people who own homes and likely have either savings...

Or worse, have taken a mortgage/equity release on their home to get their kid on the property ladder.

But that leaves a whole subsection of the Aussie young population who are left hanging; whose parents cannot afford to do this because they are in their own precarious situation, or are renting...

And with the Aussie housing market seriously overheated, you can be forgiven for asking, what happens if there is a dip?

A lot of young people would be left in negative equity, which isn't necessarily an issue in the long term, since house prices always go up, right?

But shorter term, again, referring specifically to this demographic, what happens if there are more job losses from another tail risk like we saw last year with the pandemic?

I think the mechanism below gives us strong insight into the thoughts of central bankers and how our economies are structured...

'The RBA's Term Funding Facility, bond purchases and lower interest rates across the yield curve will assist the recovery by:

We have not seen the outcome of this kind of lower rate policy be achieved, apart from increasing asset prices.

Since 2012, we have seen continually lower wage growth in Australia, and a similar picture has been painted for the rest of the western world too.

Central bank policy focuses on financialisation - making sure that the financial system 'works'.

But it is entirely flawed when we look at its effects on the economy.

Misallocation of capital has one source, and that is the distortion of risk when it comes to loan origination.

When opportunity cost vanishes, we have a problem.

But for now, the RBA thinks they're doing the right thing, so have fun staying poor, young Aussies (and Brits, Americans, Germans, French, Spanish, Italians, Japanese, probably soon China, Swiss, Swedish, Danes... you get the picture).

In the latest response to continuing tensions with the US, it was revealed on Friday that China will strengthen regulations