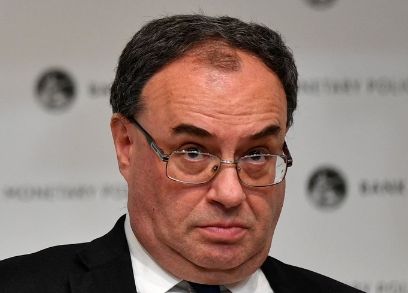 The Bank of England hiked rates yesterday. We're now back to the pre-pandemic level of 0.75%. The BoE expects inflation to keep on climbing... "to around 8% in 2022 Q2, and perhaps even higher later this year".

The pound fell, tried to rally again, but couldn't get back above resistance. It's looking a bit vulnerable here against the dollar.

"Wait, but they hiked! And inflation's going higher which means more hikes, that should be bullish GBP"

"some further modest tightening might be appropriate in the coming months, but there were risks on both sides of that judgement depending on how medium-term prospects evolved,"

The ever-unreliable Bank of England keeps on surprising markets 👇

If inflation keeps going up, everyone knows you keep hiking rates until inflation slows down and reverses...

Except when it isn't that simple...

Clear as mud. Demand-Pull basically means: "People have too much money and they keep spending it, so prices keep going up. There's low unemployment, and wages keep increasing which means there's no sign this will stop".

Either way, central banks can do something about this type of inflation.

Higher interest rates = everyone has to direct more of their spending to paying interest, so economic growth slows to a more sustainable level. That's the theory at least.

Cost-push inflation is a type of inflation caused by substantial increases in the cost of important goods or services where no suitable alternative is available.

Higher prices are then the result, as costs of production increase due to decreased aggregate supply. (Wiki)

Central banks can do sweet FA about this type of inflation, but it's their job so they have to pretend to try.

Which is why the BoE are getting cold feet and worrying about...

Which is economist jargon for...

“Higher energy bills and commodity prices will make people poorer.
Which leaves them with less money to spend on stuff they want because they're paying more for the stuff they need”

Wage increases are getting neutralised by inflation too. 👇

How's this going to end?

This snippet from Bloomberg lays it out well 👇

By depressing demand for other goods, the energy price spike becomes dis-inflationary. As a result, interest rates need not rise so fast or so far, assuming that consumer inflation expectations are kept in check.
The inflation snake ends up eating its own tail.

If 'demand depression' goes on for long enough, it becomes recessionary.

So the best thing the central bank can do is hike rates 'to a certain point' and buy themselves some room to cut in the future.

All that helps explain why the debate about whether the BOE should increase rates by half a point has melted away. Not one member of the committee vote for a super-sized rise this week, a big contrast with February when four people on the nine-member panel did.
Deputy Governor Jon Cunliffe even voted to keep policy unchanged on Thursday.

“The bank, and Mr. Cunliffe in particular, is clearly very conscious that higher current inflation is doing the heavy lifting in reining in domestic demand and thus inflationary pressures -- thereby capping inflation expectations in the medium term and reducing the need for the bank to move rates in anything more than a ‘modest’ way,” Nomura’s George Buckley and Jordan Rochester wrote in a note on Thursday.

The Bank of England could be closer to the end of their hiking cycle than the beginning...

Who's going to support the economy then?

Rishi to the rescue...

With the Bank of England raising interest rates for a third consecutive monetary-policy meeting on Thursday, attention now turns to what the government can do via fiscal policy to alleviate the cost-of-living crisis facing Britons.
Chancellor of the Exchequer Rishi Sunak should abandon April’s planned tax increase, to avoid shell-shocked consumers from driving the economy into recession.

Summing up, if you're expecting GBP to rally on the back of more rate hikes, you might be disappointed.

Macrodesiac is full of nerds. This guy says so 👇

But the good kind of nerds. If you're a nerd that wants to learn more about markets, maybe even swear a bit, this is your home.

David had a chat with Mark Palmer of Hamilton Court FX.

What economic future do we REALLY face? Give it a watch/listen 👇

The party ain't over just because QE ended. It's definitely changing though...

🔔 Pay No Attention To That Man Behind The Curtain

Nothing's fixed. CCP leaders are playing catch up, fighting fires, but this isn't the great transformation.