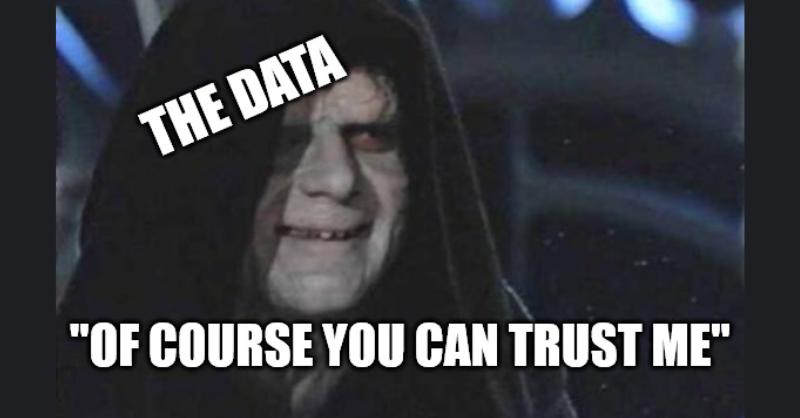 The data's not your friend. It can't be trusted or taken at face value...
Macrodesiac - Feburary 2022 👇

The data's dodgy at the best of times, so it's usually best to treat it as a direction of travel kind of thing (better or worse than last month) for comparisons. Try to extract the relevant nuggets rather than treating it as the second coming of our lord, saviour, prophet and purveyor of all truths.

Then the data becomes magically not dodgy. All in the eye of the beholder. The JOLTS number is a great example 👇

Almost 2 jobs for every unemployed person in America. And that's in a labour market where a whole bunch of people are (anecdotally) working more than one full-time job. It's not you, that last sentence really doesn't make any sense.

And even though companies are laying off some employees, they aren't exactly rushing to cut workers. Look at the latest Challenger job cuts readings 👇

Doesn't matter how you frame it, according to the data this is the lowest reading in six months...

But how accurate and useful are these indicators really?

Employ America says they're unreliable and they make a strong case. It's also an excellent read on employment data as a whole 👇

This focus on vacancies points towards a far tighter labor market than other indicators suggest. While all metrics point towards a strong labor market recovery, the extent of that recovery differs across indicators.

So, how does this problem come about?

On the theory side, vacancies are prominent due to highly-stylized models where vacancy posting drives labor market dynamics. These models ignore many important ways that firms adjust their hiring, such as recruitment intensity. Many of the assumptions and implications of these models do not hold up in the establishment-level data.

Basically, the models can't tell how much effort firms are actually putting into recruiting. Skipping back in time, a different chart and paper explain the relationship between the two across the GFC period 👇

The experience of the US labor market following the Great Recession is a prime example of how changes in recruiting intensity affect the posting of job openings and the subsequent hiring for those positions. Since the end of the recession in mid-2009, the US vacancy rate has recovered to close to its pre-recession level, while the hiring rate remains very low.

In my property days, you'd find a similar dynamic with unmotivated vendors. They'd stick the house on the market at an unrealistic price and see if anyone was stupid enough to pay it and take the property 'as is'.

A motivated vendor would make sure the price was competitive, always immaculately presented, and generally put some effort (intensity) in.

Back to the Employ America paper and this same low barrier to entry make it hard to draw conclusions about the actual state of the jobs market.

Worse, the empirical sources for vacancy data are shaky at best.
The threshold for reporting a vacancy in official statistics is low, making it difficult to infer search intensity from the raw number of vacancies, potentially inflating the number of observed vacancies.
Changes to the cost of job posting and job searching – especially on online job boards – make comparisons across time difficult.

Now, that's not to say that there's genuine observable weakness in the labour market. Most of the layoffs so far have been tech companies.

Snap are the latest, cutting 20% of their workers. But, there are a couple of things to take from that.

First, the number of staff is still well above the 2020 levels 👇

Second, those unfortunate workers that get the boot aren't short of alternatives. The replies to this tweet are stacked full of job offers 👇

So far, the majority of layoff headlines have been confined to tech firms.
Ford is one obvious exception and now 3M (95,000 employees) is also looking to cut costs. 👇

It's impossible to square an increase in job listings with an increasing number of layoffs. There's only so far the skills mismatch explanation can take you.

The data's already extremely messy due to Covid, changing methodologies, and everything else going on in the world right now. Don't take it at face value. Cross-check it, torture it, make it confess.

Buyback derangement syndrome and mis-allocation of capital in a low-interest rate world.