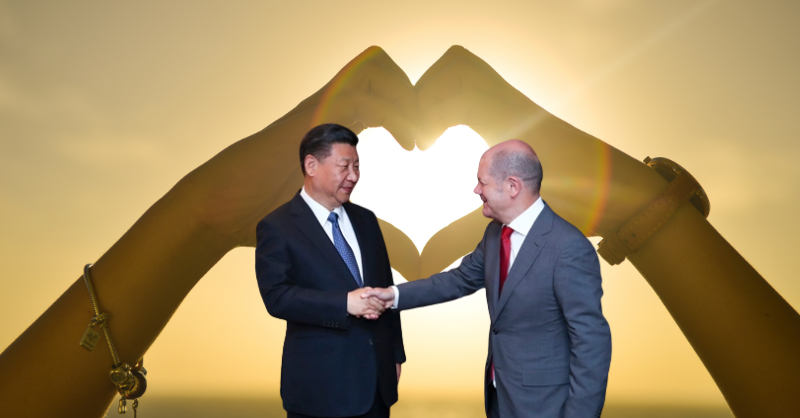 🔔 Germany & China Sitting In A Tree

There’s some big stuff going on at the moment. Ignoring all the chat about inflation, interest rates, and the usual (increasing?) ineptitude of politicians, the world is slowly changing.

One of the things we've focused heavily on over these past few years is the decoupling of China and the West, along with the changes in China's economic model.

This slow moving tanker of a turnaround is underway. Property is now for living in, not for speculation, and just yesterday China's state media were preparing the public for further price falls 👇

The report emphasizes that what lies behind the simultaneous development of housing, not speculation and rent-purchase is a deep understanding of economic and social changes. Investors need to be actively prepared for real estate pricing revaluation.

In addition, the current housing price based on financial attribute valuation raises the cost of economic and social operation, lowers the market’s marginal rate of return on investment, and exacerbates the lack of effective demand in the housing market, making it difficult to maintain high housing prices. Valuation is a matter of time, and the earlier the revaluation, the less harm and drag on the economy and society.

And new priorities have been affirmed too. 👇

Still no end to Zero Covid...

The economy will continue to be Xi's Achilles heel. 👇

Especially as he moves China towards an even more loyalist, political future 👇

The content of Xi’s speech to the party congress suggests that he is determined to lessen China’s economic vulnerability to global disruptions.

None of these narratives appeared as strongly in his report to the nineteenth party congress in 2017. In addition, this year, Xi called for a “diversified and stable international economic system” and reiterated his ambition for China to exert more influence in setting international rules and standards.

Where everything ends up is anyone's guess. When two economies (US & China) are so dominant and heavily interlinked, it's impossible to rip that apart in a year or two. Everyone else tags along for the ride.

If you want to know more about how this all happened, this is an excellent read 👇

China's not necessarily decoupling from all of the west, it's mainly from the US.

There's more than just politics underpinning this. Business interests are also playing out. US companies may pull away from China, under duress from their government.

Not Germany's BASF. They're investing billions into China (including this) 👇

While moving away from Europe... 👇

Politics and economics aren't always a good mix. Germany doesn't seem ready to get tough with China. Just this week, they've allowed Cosco to take a major stake in the Hamburg port...

And they're apparently ready to hand over a chip firm, ignoring the advice of their own Federal Office for the Protection of the Constitution... 👇

While the US and China are ready to increasingly go their separate ways, Europe, and especially Germany has some big decisions to make. Can they play both sides, and be friends with everybody?

After all, China is Germany's top trading partner 👇

It's messy. Politicians don't always get what they want, regardless of their nationality. Economics often beats politics.

Take semiconductor production for example. As Brad lays out in the below thread, the costs to make chips at 'home' in the US is far higher.

Across 10 years, Goldman estimates that the cost of a new fab would be 44% higher in the US than Taiwan.

So far, there's been no real co-ordination to any of this decoupling. More a statement that "this cannot continue" from both the US & China. What comes next? What replaces the old system?

Noah's theory of two blocs is an interesting one 👇

In fact, whether the non-China bloc coordinates on policy is really the big question regarding the new world-economic order. Together, the U.S., Europe, and the rich democracies of East Asia comprise a manufacturing bloc that can match China’s output and a technological bloc that can exceed China’s capabilities. With the vast populations of India and other friendly developing countries on their side, they can create a trading and production bloc that will be almost as efficient as the old Chimerica system.

It feels a little idealistic though. Can there be enough trust to encourage friendly nations to ditch China, relatively speaking, in favour of the US? 👇

But this will take coordination and trust on economic policy that has been notably absent so far. The U.S. will have to put aside its worries about competition with Japan, Korea, Germany or Taiwan — and vice versa.

Absent a war, or serious conflict, it seems improbable that such a complete solution could be found. Long Lockheed Martin? 😬

The Veteran's predicted Facebook weakness since the pre-Meta days. Now it's all falling apart for the Zuck. Can he turn it around?