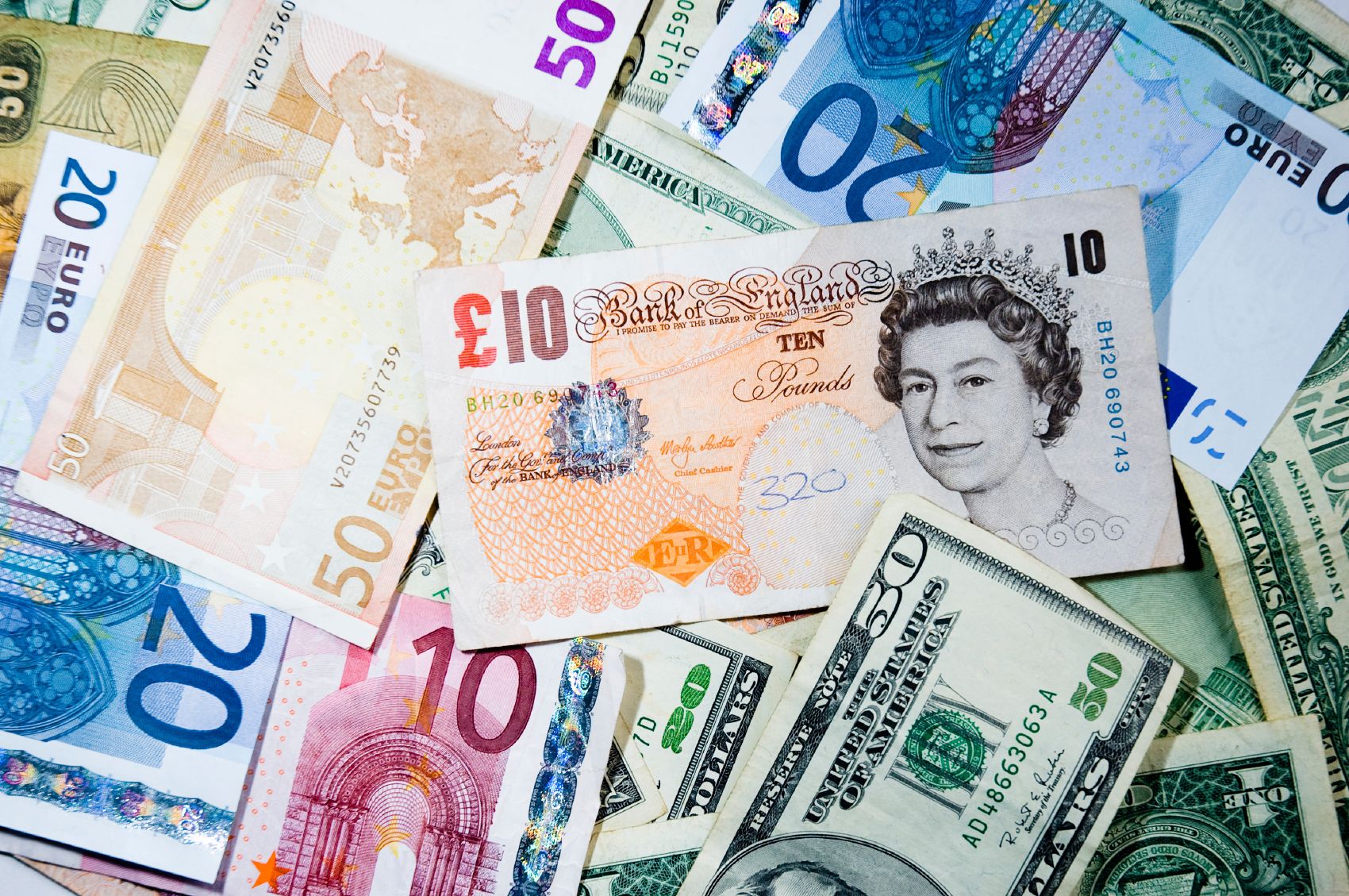 That was a headline that came out yesterday at around lunchtime.

Now, I must confess, there's still a hell of a lot of uncertainty in the market, especially surrounding Brexit.

My view is that the particulars of the 'deal', or not, don't necessarily matter at this stage.

The market simply wants to find its footing again.

Over the weekend, we had the two sides meet (again) and chat about how to progress a deal forward...

Of course, my thoughts are that the UK certainly have an upper hand here, with the only possibility of a beneficial agreement being scuppered is a certain blonde haired man conceding and blaming it on the virus.

Look, there are fundamental issues with the EU, we all know that.

But what is worse is that there is a grave issue with one of the primary topics of debate...

It appears to me that the EC don't understand their own regulations surrounding this.

That 'thing' that said tens of thousands of bank workers would have to move to the EU hubs of Frankfurt or Paris to be able to conduct business because FCA/PRA regulations weren't sufficient (bollocks), but they didn't?

Well, it can essentially be thrown out of the window in accordance with what the European Parliament literally released 2 weeks ago...

Check this part out.

The point here is that for 95% of the City's business (wholesale activities where the counterparties aren't bound by retail regulations firstly) can simply be conducted outside of an equivalence regime as long as the institution has a legal entity within the EU.

How banks traditionally have operated is that they transfer risk between branches.

In theory, EU regulators have indicated that they won't permit this kind of "back to back" trading. In reality, it's standard practice. “It’s not unusual for banks to transfer risk internally between trading centres. Risk that’s taken by U.S. banks in Asia might be transferred back to the U.S. for example. This is a recognized way of doing business,” says Bevan.

In terms of a massive moot point, you'd have to say that's one of the biggest, since for the last four years, we have been told that financial services will be decimated.

The point I am making is that there has been a hard line taken from the EU side - which is totally understandable from a negotiation perspective.

But the broader point is that things are likely going to be rosier outside of uncertainty.

The EU are off target

Just last week, Christine Lagarde mentioned something which I have been banging on about for years now.

That issue is surrounding Target2.

TARGET2 is the real-time gross settlement (RTGS) system owned and operated by the Eurosystem. Central banks and commercial banks can submit payment orders in euro to TARGET2, where they are processed and settled in central bank money, i.e. money held in an account with a central bank.

If you can't read German, here's my translation.

The Europe-wide Target2 payment system not only failed at the end of October, but four times within the past twelve months. This was announced by ECB President Christine Lagarde yesterday at a virtual hearing in the EU Parliament. The failure at the end of October caused quite a stir and called the Bundestag Finance Committee into action. On Monday the European Central Bank (ECB) announced an "independent review". "I am concerned about it," Lagarde said yesterday of the repeated failures. The CSU MEP Markus Ferber called the failures "terrifying" and a "risk to financial stability".

This was a technical glitch that held it up...

My issue contains a greater downfall than a simple computer malfunction.

I recently outlined my issues with T2 and the imbalances in the Eurozone in the piece below.

Again, this is less of a 'this-will-cause-total-downfall-and-pandemonium' type reasoning, and more 'OK, the EU leaders might end up having to worry about risks that are outside of Brexit, let's weigh up which currency has a rosier outlook.'

It's a probabilities game.

Although we have some criticisms of PMI measures, we can possibly look to the Services PMI for an indication of Eurozone activity.

What will be a much better confirmation of this is the next round of growth data.

Another measure to look at is perhaps bank lending.

Here's what the ECB had to say on Q3 data and a forecast for Q4 from the Bank Lending Survey.

The October BLS results show a tightening of credit standards on loans to firms in the third quarter of 2020 indicating credit risk considerations due to the coronavirus (COVID-19) pandemic. This tightening was in line with banks’ expectations from the previous round and was mainly driven by banks’ risk perceptions, while banks’ cost of funds and balance sheet situation did not contribute to the tightening. In the fourth quarter, banks expect credit standards for enterprises to tighten further, reflecting concerns around the recovery as some sectors remain vulnerable as well as uncertainties around the prolongation of fiscal support measures.

That last sentence is key.

No money, no honey

The constant hold ups surrounding the recovery fund seem to be a real issue for markets, and further compound uncertainty in the bloc, and especially liquidity, which we know is absolutely key for an economy to thrive.

With credit standards being set to tighten, what might this mean?

Well, the ECB is planning to launch a 'bazooka' in December.

And as we know, when Lagarde says that she's not looking/doing something, it tends to mean the opposite.

Back in March, she caused market jitters with her comment about spreads.

"We are not here to close spreads, this is not the function or the mission of the ECB,” said Ms Lagarde. “There are other tools for that and other actors to deal with those issues.”

If bank lending standards are set to tighten in Q4, then it probably means that credit spreads are going to widen (OK her comment was directed at sovereign bond spreads, but right now, I'd argue corporate debt is a shorter term primary issue).

So what's the bazooka for if not to improve liquidity and to close these spreads?

And for how long can the ECB do this and keep providing some level of confidence, outside of fiscal support aiding the real economy?

My thoughts are that this links back simply to the issue surrounding uncertainty.

Politicians politicking can spook markets and cause investors to flee pretty quickly, not necessarily because the outlook isn't good, but more because there might be more attractive places to park capital where the outlook is both good and there are fewer issues with (un)certainty.

The path of least resistance!

Well, it's not really just 'why' GBPJPY.

I'm short EURGBP too on an outright play.

But the yen side is really interesting to me.

Brexit uncertainty being removed, as I have explained, is my primary driver for being long sterling.

And with the vaccines potentially being here in Q1/2 of 2021, does this mean that investors might start to flee the safe havens of JPY and CHF (remember the USDCHF trade that could be setting up as well?) as risk regains a nice upside trend?

Sterling is a high beta currency and rallies alongside risk.

This means a risk on environment is preferential for sterling upside.

Let's also recall the Great China Decoupling theme that we have.

If we are to believe that this indeed does occur and countries globally start to really increase infrastructure spending, then commodities are likely to rally too.

This piece from Jeffries was shared in the Macrodesiac Discord earlier today by The Veteran.

This is just one component of a commodities supercycle that could occur.

Remember, many of the FTSE firms are miners which could also drive capital flows - if iron, copper, gold, tin, nickel and other metals start to be in high demand, you can bet that capital will flow to those firms, but firstly into GBP.

Here's a chart of the iShares Commodity Select Strategy ETF with GBPUSD overlaid.

We're trading at lows, whilst in the recent reflatory period (might be longer lasting, might not be), cable has also rallied in relative lockstep.

With the recent rhetoric from the BoJ surrounding Yen strength, could this be a time to play that versus sterling if we have a firmer idea surrounding Brexit?

I think there are a couple of different themes on the go here and it is up to you which ones resonate more.

Personally, I am a fan of both, and perhaps more so EURGBP.

However, I do feel that if GBP were to get some momentum, the rally versus yen would be face melting.

I've outlined some levels above where you might want to do business at.

But as always, it has to align with the macro...

But with Brexit out of the way, hopefully these other themes can come to fruition...

Which will lead to sterling having a sterling (haha) 2021.

There's a tonne of myths out there to do with markets and trading, some which are totally bullshit and others