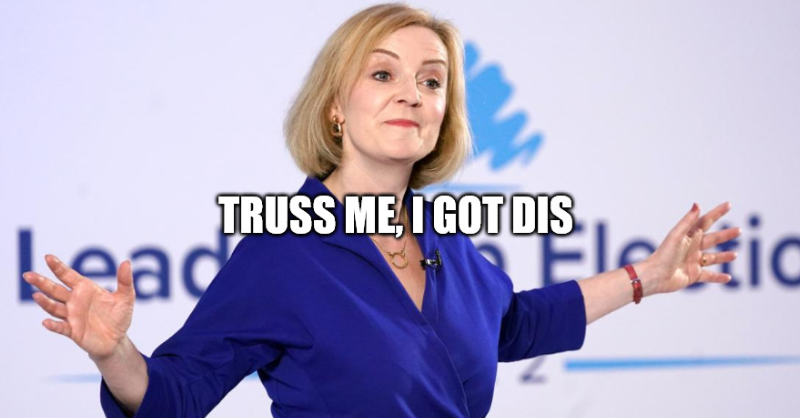 It's confirmed. Liz Truss is the new UK Prime Minister. Apparently, people have been very worried about this because the UK is perilously close to becoming a failed state or something. 👇

Fair to say I disagree. Yes, the UK has problems, but who doesn't? That feeling that everything's f*cked (again) is in a global bull market. How true that sentiment is remains to be seen.

The darkest night comes just before dawn, but when everything's pitch black, how do you know what the darkest dark is? It's only when those first rays of sunlight begin to pierce the night sky that you know the sun's rising again.

And it feels like we're in that darkest dark period in the UK. Recency bias suggests that Truss won't make a difference. Just look at the rogue gallery of recent UK leaders. She's just the same as the rest.

Unless she isn't. Anything's possible. Literally. We can't even be sure this isn't just a simulation created by aliens with a sick sense of humour...

The combination of energy crisis, Brexit and Trussonomics has sent the pound way down against the US dollar, buoyed by an aggressive Federal Reserve, US energy reserves and a stronger domestic economy relative to peers on the other side of the pair.

A recent selloff in UK bonds has also been attributed to worries about Truss potentially revoking the Bank of England's independence.

This was never realistic, at least not in any formal sense, but supposedly it worried markets and led to a selloff in the currency and bonds 👇

So, here we are, on the back of the worst joint selloff of UK currency and assets since 1983, and then these headlines drop...

Sounds pretty apocalyptic. But those changes to the central bank mandate have already been ruled out...

A Liz Truss government would be unashamedly pro-growth 👇

If that risk is reduced... Is the widening gap between UK & German bond yields attractive enough to change some minds? 👇

Looking beyond that, are there some early bombshells on the way? Why did Kwasi Kwarteng choose the FT to publish that article? Put another way, who are you trying to reach if you write your message in the FT rather than the Telegraph?

He's talking a good game (emphasis is mine) 👇

"...the new administration will look longer term and take responsibility for the enduring health and wealth of our economy and country. The work must be done now to make us more resilient to crises like this in the future, and to boost growth rates which will improve living standards for everyone."

As prime minister, Liz will take immediate action if elected that will help people with the challenges we face in the coming months, and lay the groundwork for the change we need in the long term. This means cutting taxes, putting money back into people’s pockets and unshackling our businesses from burdensome taxes and unsuitable regulations.

Given the severity of the crisis we face, there will need to be some fiscal loosening to help people through the winter. That is absolutely the right thing to do in these exceptionally difficult times.

The UK’s ratio of debt to gross domestic product is lower than any other G7 country except Germany, so we do not need excessive fiscal tightening. The OECD has said that the current government policy is contractionary, which will only send us into a negative spiral when the aim should be to do the opposite. But I want to provide reassurance that this will be done in a fiscally responsible way. Liz is committed to a lean state and, as the immediate shock subsides, we will work to reduce the debt-to-GDP ratio over time.

We also remain fully committed to the independence of the Bank of England and the important job they have in the months ahead to bring down inflation. We believe co-ordination across monetary policy and fiscal policy is crucial.

Economic growth is the key to sound public finances and a strong economy. Liz is clear that we must be unashamedly pro-growth. That is why we will create the conditions for business investment and innovation to flourish, which in turn will provide jobs and wealth to all of our citizens, and reduce our debt-to-GDP ratio in the long term.

Walking the walk is a lot harder than talking the talk, but there's a risk that markets underestimate the resolve of a new Prime Minister/cabinet to pass legislation that, without a crisis, would be a far tougher task.

As for GBP, it's easy to be bearish at the lows, but you have to ask how much pessimism is already in the price?

Buyback derangement syndrome and mis-allocation of capital in a low-interest rate world.

Nuclear power will be the bedrock of electricity markets around the globe.