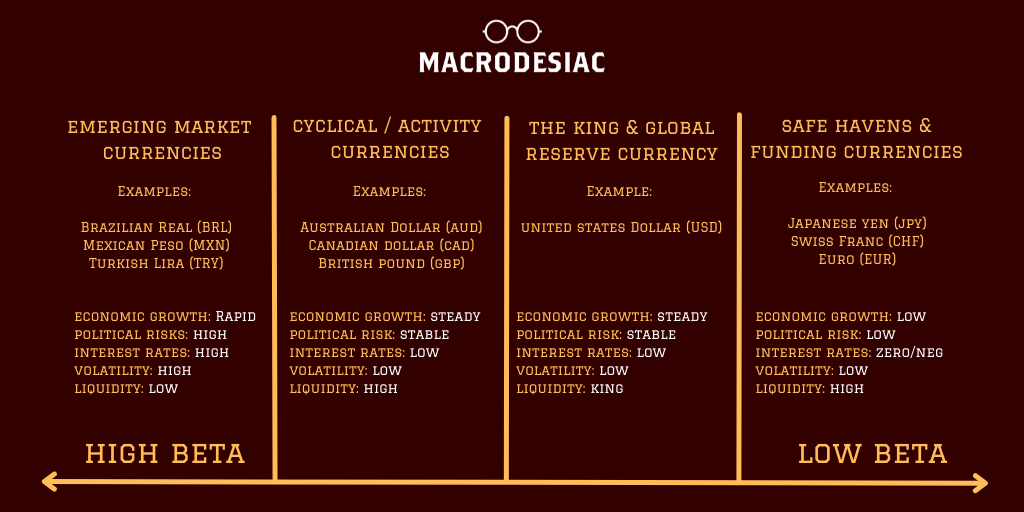 🔔 FX Havens To High Betas: How well do you know your currencies?

Currencies are affected by a huge range of factors individually, and the drivers of a currency can vary massively over time.

One thing that's pretty constant is the classification of currencies as high beta or low-beta.

Beta is a measure of a currency's volatility in relation to the overall market:

Until recently, interest rate differentials were an easy rule of thumb, a way to define beta at a glance:

At the extremes that's still true, but there's a LOT of grey in the middle where interest rates are clustered together 👇

Let's get a handle on this by grouping and ranking the currencies:

As with any generalisation, you can definitely pick some holes in it (e.g. categorising the EU as low political risk is a bit dodgy even though there IS an assumption of stability/continuity nowadays).

Leaving the little nuances aside, let's go through each group...

Interest rates are higher in these economies because investors demand a higher risk premium to compensate for the uncertainty (of defaults, instability, regime change etc.)

Developed economies where economic growth is steady, political systems are stable, and capital markets are well-developed.

Interest rates are lower than emerging economies. Investors demand a lower risk premium because of this relative stability.

Mixed Beta: The dollar needs a category of its own (and it can 'float' between cyclical and safe haven)

As the largest global economy, if the US does well, the rest of the world does too.

When the US economy is roaring and leading the pack, the dollar typically strengthens.

When the rest of the world is catching up and/or growing at a faster rate, the dollar typically falls in value.

When global growth slows, the dollar acts as a safe haven and typically strengthens.

Because the dollar is the global reserve currency, US interest rates have implications for the entire world.

As a rule of thumb, US rates represent the risk-free rate.

The Risk Premium is essentially the amount of extra insurance an investor will demand to put their money into riskier investments rather than parking it in 'risk-free' assets (such as US treasury bonds).

Arguably, USD is the one true safe-haven: the largest economy, bond market, and military superpower.

The Swiss Franc also benefits from safe-haven status, due to its exceptionally stable government and financial systems, tax-haven status and geopolitical neutrality.

Then there's the Japanese Yen, which is more of a funding currency than a safe haven.

Investors tend to use JPY for carry trades. Essentially, they borrow Yen to fund the purchase of higher yielding foreign assets.

In times of economic stress, those trades are reversed (carry trade unwind) so Yen demand increases and the Yen strengthens.

The Yen is also considered as a safe-haven so there's a self-reinforcing belief too.

The Euro is increasingly used as a funding currency due to low/negative interest rates so the same is true. The fragmented political situation means it is unlikely to ever become a safe-haven.

Here's the weighting of currencies in the Dollar Index (DXY)

And here's a chart of USDEUR overlaid with DXY...

Not very useful if you want to see how the dollar is doing against the high betas!

Key takeaway: Currencies can be grouped. Generally, what's good for one within the group will be good for the others...

Tomorrow we'll drill down into the idiosyncracies between currencies in the same groups, and looking at the role of risk premia in driving returns!

Today we talked Erdogan's unconventional approach to inflation in Turkey, and if the Fed/Powell retiring 'transitory' actually carries any signal at all...

Which currencies do investors run to when they're scared? And more importantly, WHY?