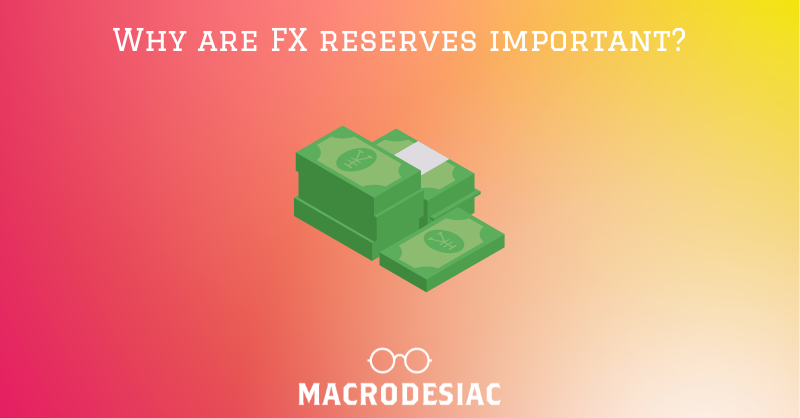 Why are FX reserves important?

Recently there has been an absolute tonne of news on the topic of FX (foreign exchange) reserves, most notably to do with the Bank of Japan's policy of slowing the yen's decline.

We have written before on why the dollar is such an important currency globally and also why it is considered a safe haven currency.

Give those two articles a read first.

But wait, what are FX reserves?

FX reserves are the holdings of foreign currency by a central bank.

Central banks hold FX reserves primarily to maintain liquidity, since currencies are highly liquid assets, but also to be able to maintain their domestic currency's value if required.

The most widely held foreign currency by central banks is the US dollar, simply because it is the most liquid asset in the world  - this gives the US dollar 'reserve status.'

In times of stress when liquidity is needed, the Federal Reserve opens swap lines with foreign central banks to calm markets and provide much needed support.

In the recent case of the Bank of Japan's FX intervention, they used their USD reserves to prevent the yen from declining further.

The Bank of Japan sold their dollars as part of an open market operation in which USDJPY was being bought heavily due to the interest rate differentials of Japan vs the USA.

They bought $19.7bn worth of yen in the September 22nd intervention, which used up 15% of their available funds...

And in October 2022, they spent nearly 2.5x the September 22nd FX reserve size to lower the USDJPY exchange rate!

It certainly worked, since the price of dollar yen from the end of the intervention on October 24th until the time of writing this article is over 8% lower.

Is the dollar's reserve status at risk?

Many say the dollar's role as a reserve currency is at risk, but this is highly unlikely.

The primary reason is the US is the largest economy in the world, and any rival, such as China, does not have the same transparency and openness as the US, nor as liquid a currency to service global requirements.

For example, the yuan is managed by the PBoC (People's Bank of China) against a basket of currencies - this would be unheard of with the dollar (and largely impossible since a reserve currency should be as free floating as possible).

The US is also China's largest trading partner. This means China receives a lot of USD - because of this, China also buys a lot of US Treasuries, and is one of the largest holders in the world of US government debt.

Many people confuse China being a large holder of US treasuries with them being a manipulator, but it is simply so they can earn some form of yield from their dollar holdings, whilst they maintain such a huge holding.

The US also has the largest army in the world. This is an important point, since if USD hegemony were to be put at risk, they could either pull support if it were an ally breaking away, or put pressure on another country on the global stage.

Ghana: are they breaking away from the dollar?

A more recent story has gotten social media into a frenzy, where Ghana said they were using gold to buy oil rather than the dollar.

But it makes sense they are doing this.

Ghana's FX reserves have fallen by 25% over the past two years as they have tried to support the depreciating cedi and they would not wish to be spending more of their most liquid and important reserve asset when they do not need to.

We are also in an environment currently when it is extremely expensive to borrow USD between institutions as global interest rates are rising, and this pushes central banks to wish to hold onto their FX reserves, especially the dollar.

You can see the growth in overnight borrowing costs for USD in the SOFR (secured overnight financing rate) chart below.

If using gold vs their dollar holdings has more utility and is cheaper, then it makes sense the central bank would do this, given the already large pressures they're under.

FX reserves aren't the most fun part of the market, but it is important to understand how they work and the different dynamics at play with different central bank contexts.

Workers are fighting back. Wages are rising, and if they don't, unions organise strikes or workers simply leave. More inflation ahead?