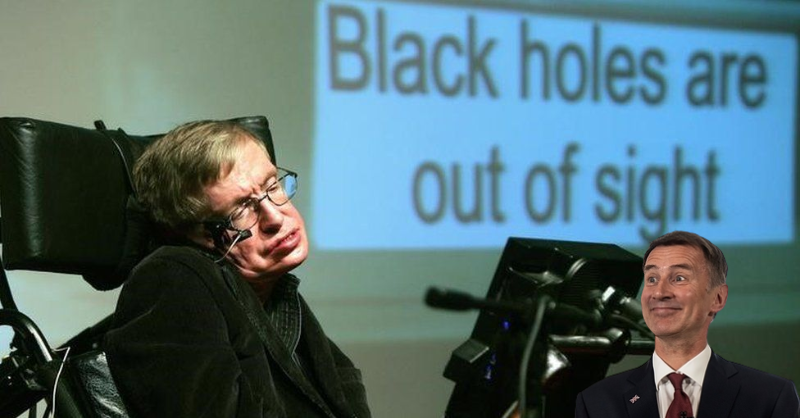 There's a big black hole in Britain. It might be as big as 70 billion quid, but we can't actually SEE it.

Jeremy Hunt says if we take more of your money and dump it into that swirling dark fiscal abyss, it'll go through the magic wormhole and reappear in the wallets of other people who need it more than you.

I think that's what he said. Full disclosure, the red mist (and accompanying tourettes) descended within the first minute of listening to these overgrown children cheering and jeering his every word.

Anyway, the upshot of todays announcement is this 👇

Honestly, it's hard to know where to start. The generals are always fighting the last war, and it seems like they're ridiculously over-compensating for the perceived mistakes of the Truss/Kwarteng government (that weren't around long enough to actually make the mistakes) 👇

The whole thing makes for massively grim reading. The economic projections are about as depressing as can be.

The underlying 'logic' is that tightening fiscal policy while raising interest rates, just as the economy is heading into a massive recession, is somehow... the right thing to do?

It makes sense on some level as a way to fight inflation (11%!), but that's barely had a mention.

Look at the miserable state of these forecasts 👇

Yes, they completely f***ed the messaging, timing and implementation, but the general thinking was on the right lines.

“It is as if we’ve learned nothing: they’re back to the same austerity, using the same models, and the same multipliers, talking about the same imaginary black holes and imaginary bond vigilantes, and the fanciful need to keep the markets happy,”

“It is all absolute nonsense. We have tried a decade of austerity and if they seriously do it again, they will be unelectable for a generation,”

As Dario says, it's like they don't actually want to be in power any more. Once that reality dawns they'll be rushing to change course (just in time for the next election, the cynic chuckled)

Many of Hunt's policies will likely be reversed long before any of today's announcements fully play out.

If there's one crumb of comfort from today's statement, it's that the OBR is usually wrong. Forecasting is hard, and they've been especially bad at it.

Still, based on the current path, it's hard to argue that things are going to get better for a while. These measures will probably become a self-fulfilling prophecy until everything's so bad that a shiny new set of forecasts (likely alongside higher government spending) need to be introduced again.

See, that's always the problem with forecasts. Unless you actually know the future, it's really hard to get them right, especially when you're trying to predict the future for a large economy, multiple years into the future.

Forecasting is absurd when you think about it. At the individual level, I have no idea what my future income's going to be. I just work hard and hope it keeps going higher. Maybe I've got some variable rate debt that goes up or down over time.

Maybe the car gets totalled or the engine fails, and I need a new one. My insurance company pays out (as long as they didn't YOLO it all into crypto via an obscure VC fund). Maybe I decide to rent instead of own. Maybe I invest in solar and wind and live off grid. Maybe I get divorced and remarry, have more kids.

Maybe none of those things happen to me. But a load of them will happen to some of the 68 million people living in Britain. Along with a load more things.

All of that chaos and complexity bouncing around within this blob we call an economy. And people think the outcome of that is somehow predictable.

All but the very youngest and perhaps the very oldest are participants in the economy.  Thus, there are tens of millions of consumers, plus millions of workers, producers, and intermediaries (many people fall into more than one category).

To predict the path of the economy, you have to forecast the behavior of these people – if not for every participant, then at least for group aggregates.

A real simulation of the economy would have to deal with billions of interactions or nodes, including interactions with suppliers, customers, and other market participants around the globe.

Is it possible to do this? Is it possible, for example, to predict how consumers will behave (a) if they receive an additional dollar of income (what will be the “marginal propensity to consume”?); (b) if energy prices rise, squeezing other household budget categories; (c) if the price for one good rises relative to others (will there be a “substitution effect”?); or (d) if the geopolitical arena is roiled by events continents away?

Not very comforting, but reality rarely is.

On conspiracies. And making sense of this complex web of stories that we call financial markets...

Markets don't really change. Yet some businesses die while others adapt and thrive. What's the secret?