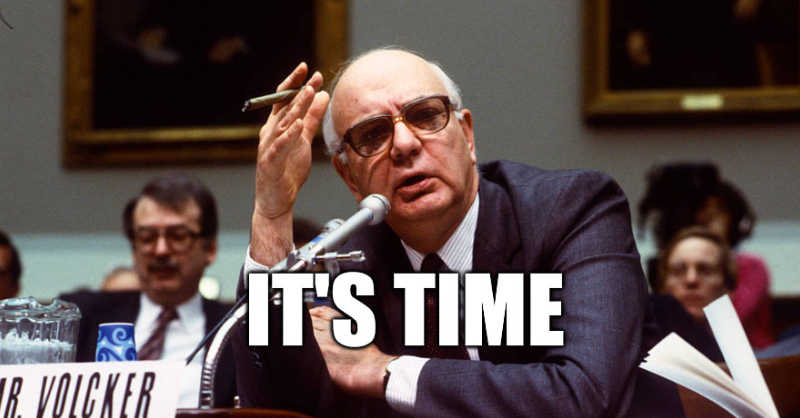 🔔 Fed Up With Inflation

There's some kind of central bank meeting tonight, you might have heard about it...

Whatever happens, they're hiking. And markets are all hawked up on the prospect of even higher rates.

We'll file that firmly in the camp of "we'll see". Talk of a 75bps hike ramped up last week when US CPI came in hot at 8.6%. It's broad-based, entrenched and leaving little doubt that inflation is spreading to all corners of the economy. A Fed nightmare.

The reaction? "Fed HAS to do something"

Now say it in this voice...

When the first couple of sellside shops started talking 75, they were outliers.

"Surely they wouldn't do 75, they pre-committed to a 50bps hike"

And because the CPI report dropped in the pre-meeting blackout period, the Fed couldn't jump on the wires with a new barrage of forward guidance...

Soon *everyone else* started to fall into line and get behind the 75bps idea. Which would make it kind of hilarious if the whole thing was a bluff and they stuck with the promised 50bps hike.

After all, they are big on forward guidance and not surprising markets to add to uncertainty. It could look a bit panicky and reduce the effectiveness of Fed communication in future...

The Federal Reserve meets today. Whether the Fed decides to raise rates by 0.5ppt or 0.75ppt makes little difference to the second half decline in inflation. A 0.75ppt increase may still be a policy error because it breaches the first rule of social media: “don’t feed the trolls”.

The Fed clearly communicated an intention to raise by 0.5ppt at this meeting. Last Friday, headline consumer price inflation rose unexpectedly. Other inflation measures have fallen, and the Fed does not focus on CPI.

Nonetheless, without direct Fed guidance, markets decided that a 0.75ppt hike is now needed. Satisfying that expectation will increase future volatility by making CPI the main inflation focus for markets.

A 0.75ppt move today means future Fed attempts to signal policy direction will be countered with “they don’t mean it, remember June 2022”.

I largely agree with Paul here, although it also seems like every Fed decision is countered with "they don't mean it, they'll just have to -insert bias here- soon anyway"

Summing up, you can make the case for 50 or 75 being the right thing to do regardless. Whatever they do now, the impacts are already being felt in the slowing economy.

Mortgage rates jumped over 6% in the US this week as the bond sell-off continued...

And tech/growth companies are axing employees at a rapid clip.
All of these were announced yesterday 👇

1100 layoffs at Coinbase comes just four months after they announced plans to ADD 2000 employees to the roster in 2022...

Makes me wonder if this is serious or trolling... 👇

Probably both. Anyway, back to the point. Fed hikes are having an impact, but that long and variable lag of monetary policy means the impact isn't as pronounced and obvious just yet...

And aside from the CPI, inflation expectations are becoming un-anchored, reinforcing the need to act forcefully.  👇

And the inflation swap curve implies that peak inflation still hasn't been reached...

Whichever way you look at it, the Fed definitely has cover for 75bps regardless of their previous 'commitments'.

They're now in the position of choosing the least bad option.

And there's plenty of variations on that floating about too... e.g. If it's 50 = dovish = buy risk, 75bps means recession sooner, buy risk.

It seems like everyone's looking to buy risk regardless so I wouldn't be surprised to see a short rally once the dust settles, purely based on the removal of uncertainty rather than a drastically improved risk outlook.

And in any case, it's not just about what they announce tonight. It's also about expectations for the future via the dot plot and economic projections...

This was the last dot plot from the March meeting. 👇

The green line/median dot guided a peak/terminal fed funds rate of 2.75%. As mentioned above, markets are now pricing that terminal rate at 4%.

As for the economic projections, they're bound to see GDP a little lower as economic growth slows, and a slightly higher unemployment rate. Plus the Fed's own all important inflation projections.

There's a LOT for markets to unpack here. It's going to be a noisy event.

Honestly don't know how anyone can go into the event believing they have an edge (unless they're as delusional as this guy). 👇

Summing up, it's a blockbuster meeting tonight and packed to the brim with uncertainty. Very easy to get wiped out in those conditions. Tomorrow's another day... 👇

As soon as the Fed meeting's out of the way, the market's focus will shift to profit margins It won't be pretty...

📔 The ULTIMATE guide to bond trading

The ULTIMATE guide to bond trading