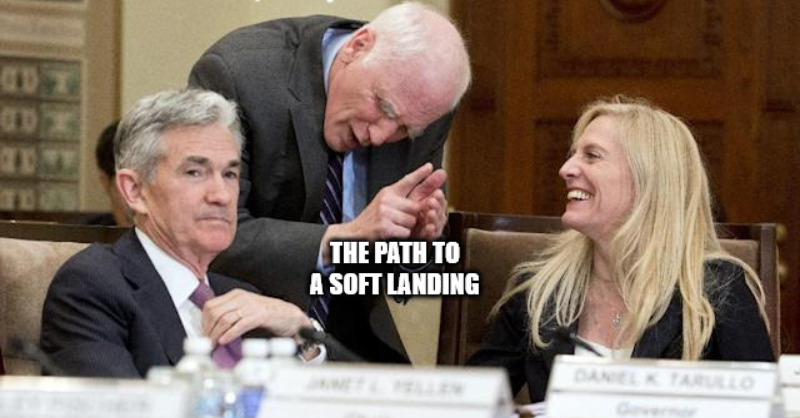 🔔 Fed Preview: Watch What They Say Not What They Do

It's got all the makings of a complete non-event. Zero shock value, the same old lines about commitments, targets, war and uncertainty.

That doesn't mean it will be a non-event though.

There's plenty to watch out for. 👇

Unlikely, but FedWatch has this at 26% odds so it can't be entirely ruled out...

Roughly 10 days ago, before the merciful peace of the blackout period, Fed officials including Waller, Bullard, Mester & Bostic all basically said that 100bps was probably too much right now. No Fed official has explicitly backed a 1% rate hike.

The closest of them was Waller who said he would look at retail sales (which came in somewhere between fine and meh) as a gauge.

There's a slight risk they have a moment of clarity and super-size it, but it's definitely not the base case and would likely come as a shock.

Esther George was a lonely dissenter last time. Will her concerns be echoed by more Fed members this time around...? 👇

“more abrupt changes in interest rates could create strains, either in the economy or financial markets, that would undermine the Fed’s ability to deliver on the higher path of rates communicated.”

Basically, if we go too fast, everything breaks and we have to stop hiking before inflation's back under our mystical (or mythical?) spell.

Kidding. It's never that simple.

ICYMI, the White House was trying to get ahead of the recession narrative this week, which has led to plenty of mud-slinging ahead of tomorrow's GDP print. 👇

There's every chance one definition of a recession will be met tomorrow, but it'll be the shittiest recession ever. Record low unemployment, loads of job openings, companies still posting strong profits. TL;DR 👇

Low unemployment (and maybe the Sahm Rule) will come up if the Fed pushes back on the recession narrative. And if you want to know more recession 'definitions' have a read of this 👇

Tim's Rule: Until we see at least one NFP print with a minus sign in front of it, there's no chance they'll acknowledge that the economy is in a recession.

While definitions matter, so do headlines. From the Fed's perspective, having a lot of people think the economy's in a recession won't be a bad thing. Everything they're doing is to slow demand and get people to spend less.

However, the Fed doesn't communicate with the little people. They communicate with markets, and any admission that the economy is in recession will be seen as a chink in their hiking armour.

Which leads nicely on to...

Ackman Asks: “Market pricing implies that the terminal FF rate will peak at 3.4% in 12/22 immediately declining thereafter to 2.7% by YE ‘23.
What factors would cause the Federal Reserve to immediately lower rates after just raising them?”

Here's what he's on about 👇

Story of the wiggly lines: After the last Fed meeting, rate hikes were seen peaking at 4.05% (green line hits white horizontal line). Markets have quickly repriced that back down to about 3.33% by year end (blue line).

Way I see it, this is mainly driven by three possible assumptions.

In reality, it's probably some combination of all three. Either way, this is what I'll be watching for most attentively...

Will the Fed credibly push back against the pricing of 2023 rate cuts?

This will probably come up in the press conference rather than the statement, (although if they really wanted to make the point, they'd put it in the statement) but the market already pricing cuts for early 2023 signals that "they're not getting the message".

Powell laid it out after June's meeting:

“Is there a risk we would go too far? Certainly there’s a risk. The bigger mistake to make—let’s put it that way—would be to fail to restore price stability.”

Will he back that up again tonight?

Market pricing of the terminal rate (peak interest rate in the cycle) and the re-pricing of cuts is the key focus for me. If the Fed pushes back firmly against 2023 cuts and projects a higher path for rates I'd expect to see more dollar strength.

Whatever happens tonight, it looks to me like markets are pricing in what they want to happen (a quick return to 'certainty'), rather than what's likely to happen (or even what needs to happen to get inflation back under control).

Is 'paying attention' an edge, and does value really matter?

What am I thinking now?

I was chatting with Tim the other day and I said to him that my main goal for each day is to end up having to do nothing and having to think nothing. Because that means you're doing something right.