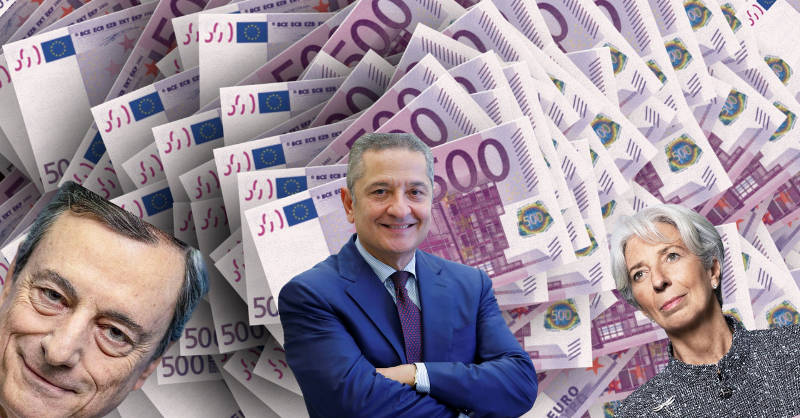 🔔 EU Fragmentation... What's All The Fuss About?

The EU's in a proper mess. This inflationary, monetary & energy crisis is set to be the sternest test yet of EU unity.

The tool's been in the news quite a bit lately. We wrote about the ECB's dilemma here a couple of weeks back too 👇

Now, it's time to go deeper.

The ECB has successfully convinced markets that they mean business. The Bund-BTP (German-Italian 10y) spread has narrowed, and now sits back at the top of the 'safe' zone at 200bps.

A couple of weeks ago, Bank of Italy governor (and ECB board member) Ignazio Visco said that a spread over 200bps would be unjustified, and argued that it should be even less.

"Today a spread of less than 150 bps would be justified", referring to Italy-Germany 10-year bond yield spread.

If only it were so simple...

See, for all the chat about the anti-fragmentation tool, nobody really knows what it is, how it would work, or what the costs will be...

This is the working assumption... 👇

And it's probably the right view for now. This too shall pass...

So we'll keep it simple around the edge of the weeds to get an idea of the options available.

QT for thee (Germany) but QE for me (Italy). It won't work. First, by actually selling German bonds, any losses would be passed on to the local central bank (Germany's bundesbank), which wouldn't sit well with Germany's constitutional courts.

Back in 2020, legal challenges over the validity of the EU's bond-buying program were upheld...

The plaintiffs argued that the ECB is effectively financing governments with the program, a strategy that they contend puts German taxpayers at a disadvantage and will undermine the euro in the long term.

That was quietly resolved, when Germany acknowledged the supremacy of European law...

Germany confirmed that the legality of actions of EU institutions can only be assessed by the ECJ, and cannot be subject of complaints to the German Constitutional Court.

However, imposing losses on the German central bank to support other Eurozone members would be another matter entirely.

ABN AMRO had a short write up on this here and noted five lessons from a tool that was used under very different circumstances...

Basically, the ECB could buy government and corporate bonds on the secondary market, allowing them to prop up government bond markets without directly financing governments... And those purchases were 'sterilised' (by selling other assets) which has been mentioned as an option recently too.

The SMP was sterilised so that it had no impact on the monetary policy stance. This is a limitation on the size of the programme, because there are limits to how much of the liquidity can be absorbed. Overall under the SMP, around EUR 220 bn of bonds were acquired between 2010 and early 2012, which is quite modest compared to the peak periods for the PEPP and APP.

The bonds purchased under the SMP had senior status. This undermined the effectiveness of the programme. Subsequent programmes, including the OMT shifted to equal status and we think that is likely with any new tool.

The ECB did not announce detailed modalities on the SMP, in terms of maturities or size.

If Wunsch is a guide, that approach could be repeated 👇

The SMP had a significant impact on spreads after announcement but it was ultimately unsuccessful. Hence it was replaced by the OMT, which probably was durably effective because markets speculated that QE would eventually come into place.

And we're back full circle to the OMT program from Draghi's "whatever it takes" moment.

After legal challenges, the ECJ ruled that the conditional OMT program was legal. It was saved by conditionality and therefore "does not exceed the powers of the ECB in relation to monetary policy and does not contravene the prohibition of monetary financing of EU nations"

And this is where ECB/EU creativity will need to kick in. The conditions make it legal. Direct monetary financing is the opposite.

Are they really going to impose austerity measures on e.g. Italy and insist on fiscal reform in the current economic circumstances?

There's a reason that EU debt rules were suspended until mid-2023.

I'm not even sure Germany would meet the requirements of ("annual government deficits limited to three percent and public debt to 60 percent of output"), unless they use even more creative accounting to get around their own debt brake...

Could there be a reshuffle in Italy?

This story really caught my eye...

Newspaper Il Foglio had reported Visco would leave his post a year early in October, paving the way for the appointment of a high profile executive close to the government. European Central Bank board member Fabio Panetta is a likely candidate, the newspaper said citing sources close to the matter.

Panetta is leading the ECB's digital euro project. There's little doubt he's loyal to the cause. This is from 2020 👇

The logic of a quicker Bank of Italy succession would allow for Draghi to appoint as many people as possible while he remains in government, instituting a backbone of technocrats in key positions to protect the country against populist influences in a future government.

Other jobs that could be filled now include state companies such as Eni SpA, Enel SpA, Leonardo SpA, and the Tax Revenue agency, the newspaper said. It referred to the plan as “Operation Bolts” -- referring to the nuts and bolts that hold a frame together.

Never believe anything until it's officially denied? It makes a lot of sense for Draghi to consolidate a core of loyal technocrats in key positions if he's anticipating turbulence ahead.

In the end, there'll be a price to pay for any ECB policy action. The question of unity and an agreement over who bears that burden will be crucial for the euro's prospects and the future of the union.

This is just the beginning of a long saga.

EURUSD & other FX pairs are available to trade with Macrodesiac Partner capital.com 👇

🔔 The SNB Wants A Strong Franc... Will They Sell Apple To Get It?

The SNB pledged to intervene and keep the Franc strong. That tees up sales of (US) stocks, foreign currencies or bonds.

Central bank complacency got us here. Everyone agrees they'll cause a recession to fix inflation. But what happens next?