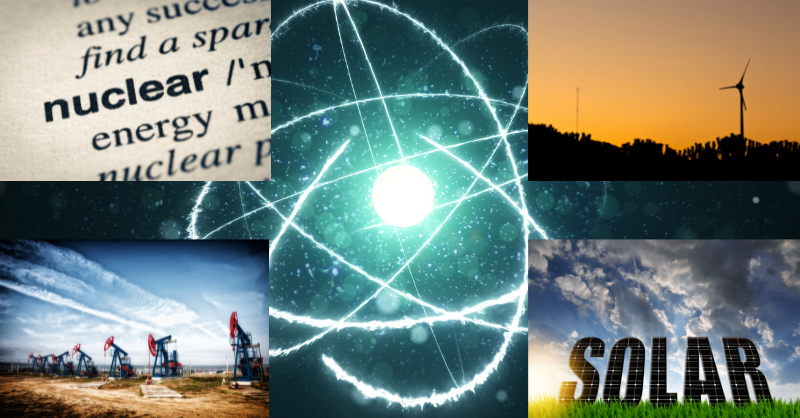 Ever since the Ukraine war, energy prices have kept on soaring. We've all seen the headlines, baulked when we've read the bills, and Oh FFS'd when we've filled up the car.

Unfortunately, this isn't going to be fixed by just doing "THIS THING".

You might remember that China got the drop on the West when energy prices were far more reasonable, and they're going to 'fix' this by going massively nuclear. 👇

The above is from a Bloomberg story that ran six months ago, but started doing the rounds again on Twitter recently.

China is planning at least 150 new reactors in the next 15 years, more than the rest of the world has built in the past 35.

I hope they're successful. I genuinely do. I bang the nuclear drum because I think it's unfairly demonised and is a key part of the energy mix. 👇

But it's a very tall order. 150 nuclear reactors is a massive undertaking.

So, emissions & pollution are clearly a problem. And who wouldn't want to live in a cleaner world? But in the West, there seems to have been more energy devoted to punishments, moralising & activism rather than actual solutions.

Outrage and hand-waving that fixes nothing

No new oil when protesting approval of a gas field 👏 🤦‍♂️

Sorry to be the bearer of bad news, but if we've only got 1028 days left, it's already too late. Enjoy the time you have, live your dreams & hug your kids because on that (oddly specific) date it's all over.

Now, there's lots that can be done, but it's going to take time and it's not straightforward.

And this is always the problem with wind and solar. They're not 'stable' and they can't easily be stored: The grid needs to spread that generated energy immediately or it's lost.

It's not reliable enough for us to errr, rely on, either. Sometimes the wind doesn't blow, or the sun doesn't shine...

Which is why it's all heating up in the natural gas markets, especially for LNG.

Now, you'd expect the EU to be at the front of the queue for US LNG (Liquefied Natural Gas) given their over-reliance on Russia and supposed urgency to replace Russian supplies...

China plans to add even more LNG capacity this year... (not just for US LNG!!)

The bumpy road towards self-sufficiency for China. And while all of this is definitively positive news, remember the starting point... 👇

According to China’s National Bureau of Statistics, coal accounted for 56% of the country’s total energy consumption in 2021. The ratio signifies a continuous decline from more than 70% in the mid-2000s.

Last year, there was international outrage that around 45% of polysilicon was produced in China, likely under forced labour...

The US responded by banning imports from the perpetrators...

That was last year.

Now, he's not waiving tariffs on the Chinese company. But the Commerce Department had been investigating imports of solar panels from Cambodia, Malaysia, Thailand and Vietnam to see if they were circumventing the tariffs on goods made in China.

Basically, 'export' the products to those countries first, and then send them to the US...

Companies were apparently holding back on investment, fearing a big old whack of tariffs when the investigation was concluded.

Depending on its outcome (the investigation), tariffs could be levied on panels imported after the 24-month period, but the threat of retroactive payments would be off the table, the source added.

"If you bring the stuff in during that 24-month period, regardless of the outcome of the investigation, there will not be those additional duties,"

And even as Biden is reported to build bridges with a visit to the Saudis next year, refinery capacity is the biggest hurdle to overcome.

Much like the renewable vs grid capacity problem mentioned earlier, there's no point pumping more oil if it can't be refined.

And there are plenty of reasons to think that new refineries won't just pop up to solve this. Chevron's CEO summed it up:

“You’re looking at committing capital 10 years out, that will need decades to offer a return for shareholders, in a policy environment where governments around the world are saying: we don’t want these products,”
“We’re receiving mixed signals in these policy discussions.”

And it'll take even longer unless governments take the bull by the horns and make the difficult decisions that will be necessary. Companies need policy certainty to make long-term investments.

Thursday's ECB meeting will set the stage for hikes in July & September. Fragmentation risks will need to be addressed if they want to go faster...