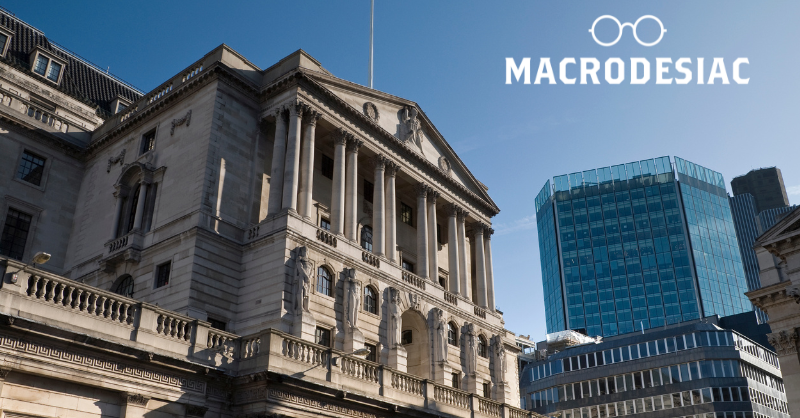 Does FTX show why central banks are important?

It's cool to hate on central banks and blame them for all the problems in an economy.

But the current FTX situation shows one way in which they are in fact pretty important.

Thanks for the Tweet, Gainzy, which spurred me to write this piece...

We can take an extremely recent example of the UK's Liability Driven Investments where the Bank of England had to come to the rescue, because EVEN MORE than FTX was at stake.

We wrote about this here...

What's really damn funny about this is that LDIs almost seem as Ponzi-like as some of the goings on in crypto...

'The UK almost came a cropper because of the outsized effects of a long-term credit derivative, known as LDI. Derivatives are largely designed to fulfil two roles which are to diversify risk and or leverage returns.

LDI or Liability Driven Investing aims to achieve both of these functions, matching the long-term liabilities faced by defined benefit, or final salary pension schemes, with enough leveraged returns to match or exceed them. Only no one seems to have told the Bank of England or the Treasury about this, but that's by the by for the moment.'

It's well worth having a read of that above linked piece.

The difference between the case of the LDIs and this disaster with FTX is the Bank of England has a remit to enter into the market to become an indiscriminate buyer with no specific or required profit incentive.

It's similar to how the Swiss National Bank conducts its FX operations - it pretty much was buying US equities, to effectively sell the franc to boost inflation.

The fact they can print money or asset swap with commercial banks means they can step in when required to provide support for markets, or even single entities, as in the case of the Great Financial Crisis, which initially was a problem of liquidity where the BoE et al. could step in, but eventually was a problem with capital (which meant the government had to hop into the mix).

The lack of this support in crypto creates a problem.

Crypto is naturally highly sensitive to interest rates, but is not deemed a risk (yet) in the context of financial stability, whereas the stock market crashing certainly would be.

The stock market crashing would also lead to bonds doing something mental as well, which in turn, would lead to central banks having to do something.

In recent times, that has meant a sharp drop in interest rates and provision of liquidity via repos to maintain the adequate rate cap, quantitative easing or some other kind of liquidity facility, like the BoE during the LDI mania.

For crypto, many are reliant on another entity, a private entity, stepping in to resolve issues...

But what if there were another way?

Decentralisation is a good thing in an industry which does not necessarily want formal regulatory oversight...

So why not involve decentralised regulation?

Why not have a network that sits connecting all exchanges, that provides a 'bail-in' if things were to go bad? Kind of like an insurance fund for participating, where if an exchange were to go down, it is indiscriminate in terms of who is allocated the capital - they're just made as whole as possible up to a certain threshold, and other users aren't affected since they've already 'spent' that money in trading commissions...

The exchange, as it reaches certain volume thresholds, would be required to place more and more capital relative to customer deposits with this decentralised entity, much like how it works in traditional regulatory frameworks where a firm must hold $xxx,xxx of regulatory capital to operate.

This would also fall on VCs to be more prudent as well, since more of their investment would go on being sound from a regulatory sense.

So we enter into a realm where we have this entity that is run by the people (perhaps with its own regulatory remit in a strong jurisdiction, doing the job of the regulator themselves) whilst almost acting as a clearer too.

The losers here are the users.

If there can be some security, more smoothing of liquidity risk and the ability to have some of the good parts of regulation from the traditional remit, I reckon it would go a long way.

An example of this already being done is with flood risk insurance policies.

And there are insurance linked securities known as Cat Bonds that can be offered to investors to mitigate losses during a catastrophe.

I think the overarching problem with trying to financially innovate crypto, though is that the problems for crypto at the moment are created internally, have all been to do with liquidity and adverse risk management (because naturally there is little regulation).

1) Proof of reserve to make an objective judgement on how much MORE capital to place with this outside entity, voted on and run by the people (there would be NO token, simply trading with an exchange that is a participating member would be sufficient).

2) Placement of capital reserves with entity - reserves should then be used to purchase Treasury Inflation Protected Securities AND THAT IS IT (thanks Fed for providing the liquidity here again).

3) Transparent and objective framework through which to view the health of every participating exchange. If an exchange doesn't wish to be a member then questions should be asked as to why.

If anyone is actually interested in talking through this then I'm all ears!

Is this ex-BoE economist wrong? No way. An economist being wrong? Surely not? I don't quite get this recent Tweet from Mr Blanchflower...

Crypto is dead. Long live crypto. What comes next?