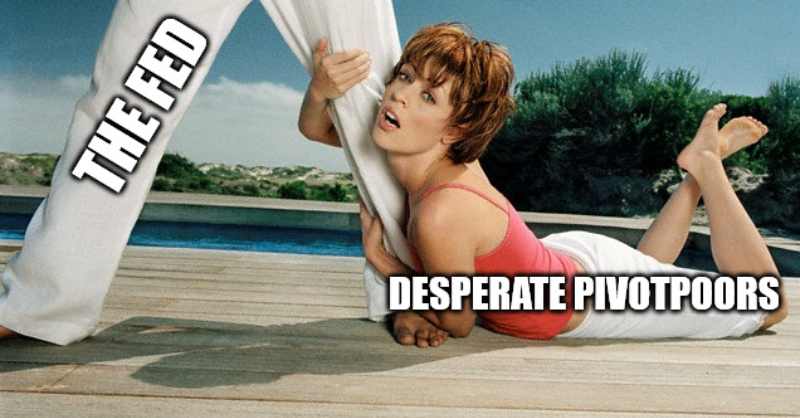 "Oh.My.God. Literally on the edge of my seat to find out if the Fed pivots today" he quipped, his comment dripping with sarcasm.

For some reason, The Big Fed Pivot™ is being pitched for this meeting. Anyone seriously talking about a pivot now is either getting way ahead of themselves or simply hasn't grasped the meaning of pivot in this context.

Pivot (verb)
"If someone or something pivots, they change direction"

Where's the pivot on this chart? 👇

There's no change in the direction, although they MIGHT hint at a slowdown in the pace of hikes ahead. We could even get a handful of dissenters (a few votes in favour of 50bps) at this meeting. However... 👇

THAT'S NOT A PIVOT

Presuming Powell and the gang go ahead with the 0.75% hike later today as expected, that's nowhere near the end of the hiking cycle. We're on course for 5% (or more) by March 2023.

Which is pretty much in line with bank forecasts too 👇

How long they stay at the terminal (peak) rate is another question altogether.
The Fed's ability to accurately forecast the path of inflation and the economy is discredited so we'll cross that bridge when we get to it.

What are the arguments for a pivot?

The September CPI report showed that headline inflation was down, but core CPI set new highs. 👇

Once again US consumer price inflation has come in higher than expected with headline prices up 0.4% month-on-month in September (consensus 0.2%) and core – ex food and energy – up 0.6% MoM (consensus 0.4%).

Another metric, Core PCE is at 5%. One of the Fed's favourite measures of inflation is way above the 2% target and not falling.

How about that wage-price spiral they're so worried about?

Not only that, but the prior figure was revised higher too.

Over to the Fed Whisperer™ for his take on this 👇

Quits Rate still high - another metric the Fed is watching 👇

Because people who are prepared to quit can often find another job that pays better... 👇

All of which keeps the labour market tight, supporting more wage hikes and higher prices. Companies keep hiking prices and we keep paying them 👇

Economists will correctly point out that real wage growth is negative (prices are rising faster than wages), but that hasn't really stopped people from spending just yet.

It's not the same for every corporation either. Pricing power matters. Plenty are issuing profit warnings 👇

Google and Microsoft disappointed recently. The earnings were hardly a disaster, more a slowdown from very high levels. Others, like Coca Cola & PepsiCo are happily raising prices 👇

Soooo, what are the other arguments?

The RBA, the BoC (and the ECB?) as leading indicators for the Fed?

Some have suggested that the Fed will take their cue from other central banks.

The RBA recently slowed the pace of rate hikes while uprating their inflation forecasts...

The RBA also raised its inflation forecast to 8 per cent this year, from 7.8 per cent. In 2024, the inflation rate is forecast to still be above 3 per cent , making it three years in a row that the central bank expects inflation to run above its 2-3 per cent target band. ~Bill Evans, Westpac

"Today's dovish pivot supports our view that the BoC will continue to taper its tightening cycle into year-end with a 25 bp increase in December leaving the terminal rate at 4%," said Josh Nye, senior economist at RBC Economics,

It's not a dovish pivot Josh. It's a less hawkish continuation... 👇

"This tightening phase will draw to a close. We are getting closer, but we are not there yet," BoC Governor Tiff Macklem

While the ECB sits in a class of their own. Inflation hit 10.7% last month...

Maybe politics can play a part 👇

Kidding. They'll keep interfering, but chances of the Fed paying attention to a few moaning politicians are tiny.

Market Reaction - It's unlikely to be as clean as this 👇

Anything can happen in the aftermath of the meeting. For now, it seems like markets are seeing only what they want to see, and just over half of the S&P 500 down move (from the August highs to the October lows) has been retraced. 👇

The data (especially on jobs and inflation) will continue to be a better guide than anything that's said at today's meeting.

TL;DR Inflation is still high, employment is still strong. Desperate cries for a pivot will be ignored, although a data-dependent slower pace from December might be discussed.

Hedge our FX risk for more profits? Sounds like a lot of work, we'll just sacrifice 12% of our annual profits instead...

The basis of life and progress. Those who want to end capitalism simply don't understand how the world works