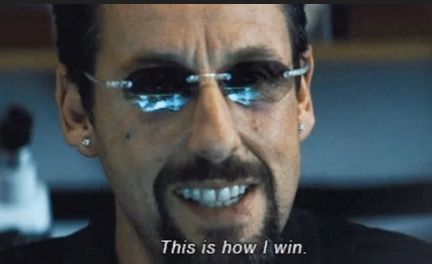 Disclaimer: The following article may not be suitable for all readers. If you have any doubts about the merits of sarcasm, occasional dark humour and deep cynicism, seek advice from a professional intellectual.

Everyone LOVES a positive, feel-good quote so let's do that 👇

“Find out who you are and do it on purpose”

Heart-warming, right? You know who said that? The musical legend that is...

You might be wondering what Dolly Parton has to do with trading and finance.

But that quote sort of does.

See, I firmly believe that trading (and investing) is gambling. And anyone who's going to stick around financial markets for any length of time will eventually need to accept that. However...

There's nothing wrong with gambling

It's not a dirty word, or a sin. People gamble every day. The modern world was built by gamblers. That's basically what progress is. The sum of a load of gambles over decades and centuries.

If you stop and think about it (but not for too long) every decision you make is a gamble.

Some of those decisions have the tiniest amount of risk attached to them (like eating food that's a couple of days out of date) while others can shape the course of your entire life (like starting a business or taking out a mortgage).

Risk and reward usually have a solid relationship too.

If you take the big risk of starting your own business or taking on a 30 year debt to buy a house, the reward should be proportionate to that risk, even if the potential payoff is a long way into the future.

If you eat something a couple of days out of date, it's a small risk, but the reward's not all that big either. You're not hungry any more, but there's a small chance you'll have the s**ts tomorrow.

But we're not talking about that kind of gambling.

(scroll down to keep reading)

Shout out to Macrodesiac partner Syscoin, going from strength to strength. 💪 👇

We're talking about financial markets and the delusions many people have about being traders and investors (trading and investing is for the elite, the upper class, gambling is for the peasants, yaaah yaah -snort-)...

F**k that. Everyone's a gambler. And there are two main types of gamblers in the markets.

These two categories have nothing to do with account size, job title, time spent in markets, or anything else. It's just a representation of two extremes.

The Gambler believes deeply in their ability to predict the future. Does lots of 'reckoning' (I reckon...), usually doesn't really understand the products they trade & they religiously read ZeroHedge & Jeremy Grantham.
It's going 'to the moon' or 'completely f**ked' (often on the same day).

The Deliberate Gambler has a solid plan of how to extract money from the market. They're looking for market inefficiencies, and smashing buttons with expectations of a payoff based on something roughly tangible. Some people call it 'edge'. Others call it 'positive expectancy'.

The problem for the gambler is that even if their incredible ability to predict the future leads to them being right, they can lose money if they take the bet.

For example, the "coming food catastrophe"... 👇

There may well be a food catastrophe, but is there a trade/investment/bet to be made on even higher prices? The gambler might think so, but the deliberate gambler probably doesn't.

The deliberate gambler will usually look for mis-pricing and inefficiencies.
Take this week's example in GBPUSD 👇

One month ago, cable was trading at 1.31. Earlier this week it had plunged to the high 1.21s with the UK in the danger zone: "UK fast becoming epicenter of global stagflation crisis... about to get even worse, according to majority of market participants" and short positioning was pretty extended too.

The market had efficiently priced in a real sh*tshow.

Still a sh*tshow, but not as bad as markets had priced.

This isn't restricted to financial markets either. Have a listen to the podcast referenced in here 👇

TL;DR The whole reason Betfair exists is because Bert was a deliberate gambler who (at that time) understood the odds better than the bookies. After a while, they wouldn't take his bets any more...

Ironically, that market was too inefficient for Bert to profit. So he created Betfair.

Cutting to the chase, anyone who is going to be a trader or investor will see their odds of success vastly improved by doing it deliberately.

Yes, that sounds ridiculously simple, and it's obviously not the only thing that matters, but it IS a good starting point, maybe THE starting point.

How can anyone be successful at something if they don't commit to that thing in it's purest form?

The million dollar question. The answer, as always... It depends.

Some people might be better at reading order flow, others better at taking a longer-term view. Maybe certain traders ARE better at forecasting the future than others.

There are thousands of inefficiencies to exploit and strategies to deploy. There's no single right answer. Here's one to look into 👇

Whatever those little edges are, they need to be deliberately developed and refined so they can be exploited with confidence

Even though it always gets reduced back down to this in the end. 👇

Sometimes, a simple approach is best... 👇

Find out who you are (a gambler?), and do it on purpose.

But there's no secret sauce, no matter what this chancer says 👇

Walmart & Target are down bad, profits slashed, CEO's turning negative... The Veteran's worried about the US consumer