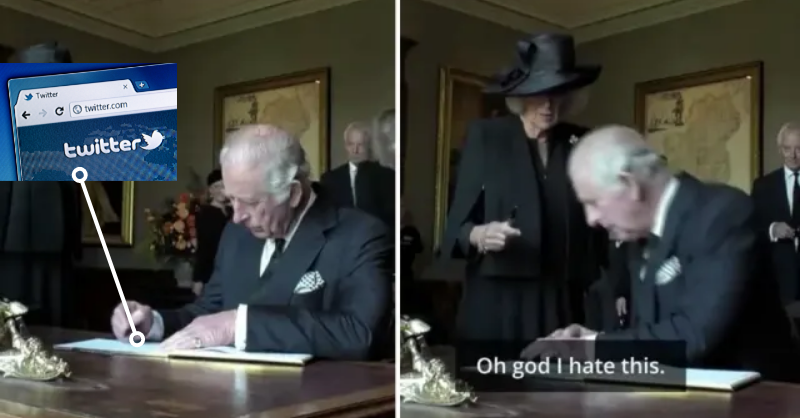 In an exclusive Macrodesiac interview, the new King tells us that the peasants need to use context and critical thought to navigate this challenging market environment.

He added that Twitter's full of misinformation. Fake influencers and newsletter hacks are manipulating your brains with some of the oldest rhetorical tricks in the book.

Some of them will even falsely attribute quotes to an authority figure to add credibility to their claims. It's sickening.

The crown's a nice touch. Anyway, Old Charlie's right. And it's only going to get worse. See, the media will jump on any bad news story, manipulate (or just not check) statistics because bad news sells best. If it bleeds, it leads.

If an economic downturn didn't coincide with companies cutting ad spending, everyone would be long media stocks at the end of the cycle.

Fear and the bad news that fuels it is addictive. If I was disingenuous, I'd link a study showing that it's as addictive as cocaine (I couldn't find one, so I'll do the experiment myself and get back to you...)

Seriously now, paying attention to the news isn't the big problem. It's how we consume the news that can cause issues. 👇

Having a maladaptive relationship with the news differs from being a “news junkie,” which has colloquially and academically been conceptualized as being extremely interested in the news and/or consuming an excessive amount of news (e.g., Mourão et al., 2018; Prior, 2007).

However, this behaviour typically is not considered to be problematic.
That is, we argue it is not the amount of news that one consumes that is problematic so much as the nature in which it is consumed.

For anyone interested in financial markets, Twitter is an absolute goldmine. And I mean that in every sense of the word. Gold-mining is an intensive and often frustrating process, but the occasional nuggets make it worthwhile.

Just like real world mining, experience leads to better process, and the nuggets are easier to extract.

But there's always useless stuff to work around in both. Sometimes it's just pure opportunism... 👇

This is an absolute pearl, tweeted the day after the Queen's funeral. The article linked is from May 2019. The best part...? 👇

A diplomatic cable written by Ambassador Rüdiger Freiherr von Wechmar after a meeting with the monarch in 1988 says that the Queen left “no doubt that the future of Britain lies in Europe”.

Ah. Not the EU then, which wasn't founded until 1993 via the Maastricht Treaty.

When things are going badly in the economy, everyone wants to be first. Accuracy doesn't matter... 👇

Recession is here though. Guys, come on, you can trust me, just click that little red heart. I need the dopamine, just one little click guys please...

This next headline is a better one. It's factual and a bit scary. Denmark's largest pension fund is down big.

Obvious why this got attention. The outliers always make the headlines... 👇

Terrible returns. So what went wrong? Let's grab the report from the funds website and check out these two charts. 👇

Even though the columns are green, they represent the losses. The fund is heavily exposed to government and mortgage bonds. The same government bonds that are on track for their worst annual loss since 1949... 👇

Global equity markets are down too which hasn't helped. Here's the breakdown in ATP's own words. 👇

Government and mortgage bonds generated negative returns of DKK 48.4bn, mainly due to the negative contribution of United States and European bonds as a result of increasing interest rates.

Listed international equities generated negative returns of DKK 10.7 and of these, the listed US equities had the largest negative contribution.

It's hard to look at this as anything other than a failure. But what should they have done instead given their mandate?

This is the problem when everything sells off at the same time. There's nowhere to hide. Nobody wants their pension fund to be punting commodities, and funds with long-term obligations probably don't want to get more active in this environment.

Ride it out & blame market conditions is the safer play from a bureaucratic career perspective. Yes, I know that's cynical. It's supposed to be.

ATP have a matched hedging portfolio that should guarantee payouts at least. 👇

The hedging is done in an independent portfolio in ATP which consists of bonds and interest rate swaps - the same assets that are behind the market rate curve that we use to calculate the value of the guaranteed pensions.

This correlation ensures that ATP has the funds needed to match what we have promised our members. In other words, regardless of which way interest rates go, our guarantees are intact.

To top it off, the investment portfolio is still UP vs 2019.

Now, it's hard to spin this as a good news story, but it's not a complete disaster in the current context. Nonetheless, it does show the dangers of being too passive.

And there's a huge dose of irony here too. ATP had only just succeeded in convincing the government to let them invest in riskier assets 'after years of falling bond yields eroded savings'.

Yet the biggest losses came from 'safe assets'. Seems that rising bond yields can erode savings too... Who knew?

There'll be loads more stories like this over the coming months. Some will carry more weight than others. Keep an open mid. You're gonna need it.

Everyone knows you never go full Volcker. The only Fed preview you need.