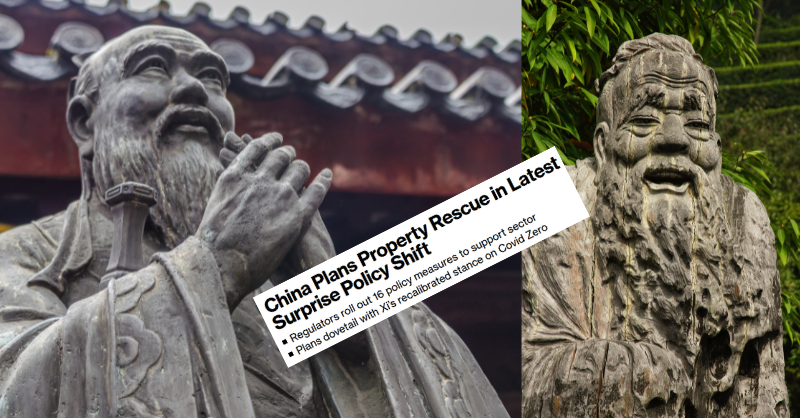 Every time I write about China, I feel like a broken record, a negative Nancy (not the stock trader one). Yes, there have been some notable changes in China lately.

Bloomberg has an excellent summary of the measures here 👇

China’s sweeping rescue package to salvage its real estate market is detailed in a 16-point playbook for finance officials across the country.

The initiatives range from addressing the liquidity crisis faced by developers and a “temporary” easing of a signature restriction on bank lending, according to people familiar with the matter. It marks all-round efforts to bail out the real estate market, which central bank Governor Yi Gang said he hope would have a “soft landing” after recent data showed improvement.

A 'soft-landing'. Sounds familiar. The TL;DR is that China is pushing new financing to bring some relief to the property sector. Mainly by ensuring that property developers have funding to complete the projects (or can be bought out by larger players who will do so), plus support for buyers and existing owners 👇

However, most of these developer financing measures are 'temporary', and this is a permanent problem, with another big hurdle to overcome next year.

That debt maturity peak would be the 'at least $292 billion of onshore and offshore borrowings coming due through the end of 2023'...

The weaknesses and risks are still the same in China's economy, even as Covid Zero is gradually reversed. But we don't talk about things like that 🤐

You can always rely on outgoing officials to speak freely once the restraints are removed... 👇

There's a conflict between this supposed reversal in policy. The ideal of 'common prosperity' requires an increase in domestic demand... 👇

Yet many German companies are still looking to shift production to China (to benefit from production subsidies and relatively lower wages).

How does that boost domestic demand in China? And does it make sense for Germany as a nation??

China's importance as an export market for German industrial goods plateaued a decade ago...

Just because the exports stopped growing, that doesn't make it unimportant, but China's increasing role as a competitor for Germany (especially in the auto sector) should be a big consideration.

Meanwhile, the US is actively ensuring that ties with China cannot deepen further unless China reverses the same "non-market economic practices" that make them so appealing to multinational companies in the first place...

China's domestic problems are far from solved, and the political tide has already turned in the West...  Banks are giving up too 👇

And while we're talking about China... Presume you're a very wealthy person that realises the tide is turning for the Chinese economy at some point in the last five years or so. You want to get your money out.

China's capital controls are a problem for you. Was crypto a solution? Specifically Tether?

If this was a superhero movie and these were the origin stories of the main Tether characters... 👇

Wouldn't you have a few concerning, unanswered questions about Tether's true purpose?

In other amazingly awesome news, we did a video (for the first time in MONTHS) on why FTX is not Lehman. Give it a watch/listen! 👇

FTX is not Lehman - here's why.

Over the last week or so, I've seen a TONNE of posts describing the FTX disaster (and that is what it is, a fraudulent, unmitigated and damning disaster) as a 'Lehman Moment'. I think there's a few reasons why people are referencing this, but it's wrong.

We look at whether there is WORSE news, data and sentiment coming out to determine whether we remain or push above the 200DMA.