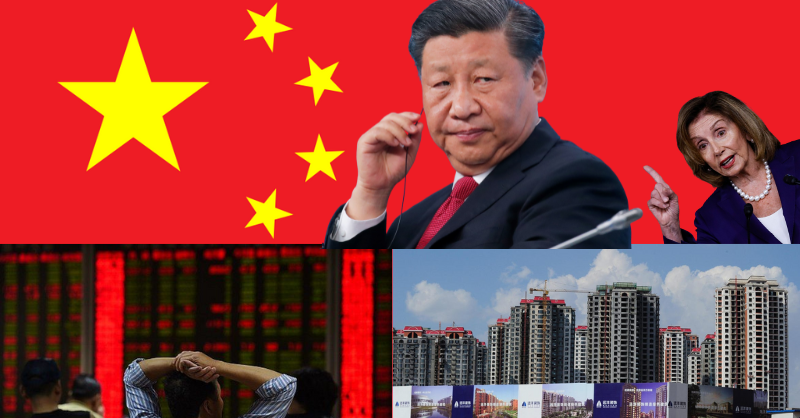 The thrilling (!) saga of Nancy Pelosi's Will She, Won't She Taiwan trip is just a tiny distraction from the colossal problems that continue to mount in China.

"Pelosi is in Singapore and will fly to South Korea, en route Taiwan, after visiting Malaysia. The PLA has clearly been well prepared.
If she dares to stop in Taiwan, it will be the moment to ignite the powder keg of the situation in the Taiwan Straits."

Like being back in school... "come and have a go if you think you're hard enough".

Anyway, this is all happening against a backdrop of rising US-China tension.
This snippet via Newsquawk & SGH Macro Advisors sums up the vibes 👇

A senior official in Beijing said the atmosphere of last week’s Biden-Xi telephone conversation was the worst among the five talks between the leaders and President Xi was said to have showed the toughest attitude he has ever shown to any world leader, while the most important topic in the conversation was China-US relations especially the 'Taiwan Question'.

Furthermore, the official believes the probability of US House Speaker Pelosi's visit to Taiwan is low, as President Xi’s tough position on Taiwan will push President Biden to put more pressure on Pelosi to bypass Taiwan on this trip and the official warned that an accidental military conflict around the island of Taiwan cannot be ruled out if Pelosi insists on visiting Taiwan.

Hard to pass it off as accidental if everyone knows what's happening and when...

Still, all the world's a stage, and politicians love a good pantomime... As long as it doesn't turn into a Franz Ferdinand moment, eh?

Across the strait, China has plenty to be concerned about. Many of the issues stem from the property sector of course, while the spotlight has swung from the developers to the banks...

In a worst-case scenario, S&P Global Ratings estimated that 2.4 trillion yuan ($356 billion), or 6.4% of mortgages, are at risk while Deutsche Bank AG is warning that at least 7% of home loans are in danger.
So far, listed banks have reported just 2.1 billion yuan in delinquent mortgages as directly affected by the boycotts.

The Politburo meeting was supposed to yield solutions, the great stimulus hope.
It didn't deliver...

“The biggest bottlenecks for growth right now are the property market and Covid policies, and the Politburo meeting did not offer any signals of a breakthrough on these fronts,” said Wei He, an analyst with research firm Gavekal Dragonomics.
“The consequence of sticking to the policy status quo is likely to be a weak recovery in the second half.”

Even as the PBoC promises to 'keep liquidity ample', it's not being transmitted into the real economy and is piling up at banks instead.

Local authorities can't magic up cash out of nowhere either. Taxes from land sales were one of the main sources of local government income.
Consider the insanity of this:

Up to one-third of Chinese local governments could have to take measures such as reducing spending by the end of this year, according to S&P Global.

Some have already slashed income for civil servants. In July, a district in Shenzhen said it plans to cut 650 million yuan ($96 million) in spending on bonuses and subsidies for employees at government entities and state-owned organizations, while it redirects more than 600 million yuan to Covid testing and other Covid-related expenditures.

“The chance of a vicious cycle—declining housing sales and prices, mounting developers’ distress, and deteriorating local government finances—developing is concerning from growth and financial stability perspectives,” wrote Oxford Economics in a recent note to clients.

Hard to disagree. On top of this, the latest Caixin manufacturing PMI found that the employment outlook is still negative 👇

“Employment remained weak. The recovery in supply and demand failed to spill over into the labor market for manufacturing, which continued to shrink.

The gauge for employment, which has been in contractionary territory for 11 of the past 12 months, came in at the lowest reading since April 2020.

Companies, strongly inclined to lower costs in the face of sluggish market demand, were cautious about expanding their staff."

Unless demand picks up significantly, output is likely to be reduced as inventories rise 👇

“Lower than anticipated sales, reflected in accelerating rates of decline of new orders and exports, have led to the largest rise in unsold stocks of finished goods ever recorded by the survey.
Increasing numbers of producers are consequently cutting production in line with the deteriorating demand environment, as well as scaling back both their purchases of inputs and hiring of staff.

TL;DR Nothing has actually been resolved in China. While the Zero-Covid policy remains in place, it's practically impossible to see consumer and business confidence improving significantly. Rating: Stagnant at best.

🔔 This Ain't Your Daddy's Inflation

...an open-minded and skeptical view of the world, in which economic theories are seen as tools to aid understanding rather than as bodies of received revelation.

We've been here before, but the case is getting stronger for an inflation peak. It's a long way back and won't happen overnight...