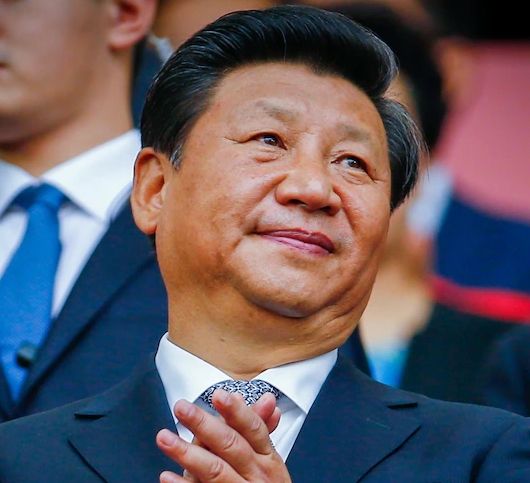 As the financial world focuses on Russia/Ukraine and the Fed's next move, attention has largely moved away from China's economy.

The challenges facing China as the country tries, once again,  to rebalance the economy in favour of 'high quality growth' are numerous.

And the focus from key policymakers has notably shifted to "stability" instead of growth. No major policy stimulus is anticipated...

We covered the consumption side here last year:

A key measure of China's money supply signals that companies' capital cushions are narrowing as sluggish consumer demand keeps cash from circulating through the economy.

The M1 money supply, which includes cash and demand deposits at banks, fell 1.9% on the year for January -- the first-ever decline in data going back to 1997. This and the M2 supply, which also includes time deposits and household savings accounts, are closely tied to economic conditions and prices.

The downturn was driven by a 5.3% drop -- the largest on record -- in corporate deposits, which make up about four-fifths of the M1 supply.

The Lunar New Year was a major factor in the decline. Many companies give employees generous bonuses before the long holiday, transferring money from corporate to consumer accounts. Reflecting this, the M2 money supply rose 9.8% on the year in January, faster than the previous month's 9% rise.

But even after accounting for this seasonal factor, the month's M1 growth still amounted to just 2%. This is tied to broader economic trends, namely a slump in household spending.

This year, households have been reluctant to open their pocketbooks, in part because of the job market's slow recovery.

It's all about cash flows and slow growth.

If a firm is struggling to keep the wolf from the door, they're forced into shorter term funding...

Cash-strapped companies are relying more heavily on short-term funding sources. Short-term bank loans jumped 75% on the year in January, and financing from shadow banks has rebounded sharply as well.

Net funding derived from such sources as entrusted loans, trust loans and undiscounted bankers' acceptances -- none of which appears on bank balance books -- has reached its highest level in about five years, indicating that the authorities may be relaxing restrictions on shadow banking so that smaller business can maintain cash flow.

Short-term lending helped drive a 10.5% expansion in a broad measure of financing, including lending to corporate and retail borrowers, to 320 trillion yuan ($50.4 trillion) at the end of January as growth of this measure continued to accelerate after bottoming out in September. Bond floats by local governments to fund economy-boosting infrastructure projects also contributed to this rise.

So it sounds to me like it's more of the old playbook: spending on low quality infrastructure projects to boost headline growth rather than actual growth.

Reviving private-sector demand will be essential for stable economic growth. The State Council on Monday affirmed plans to incentivize capital spending by small businesses through tax breaks and to encourage long-term borrowing in the manufacturing sector.

"We will actively promote policies that will contribute to economic stability, and cautiously implement policies with a contractionary effect," said Ning Jizhe, who heads the National Bureau of Statistics.

And the property sector crackdown will remain a drag, although some cities are trying to improve conditions for buyers...

After the Two Sessions in early March, we think more local governments (especially higher-tier cities) will roll out demand-side easing.

March could be a pivotal month for other reasons too...

Many emerging economies, like China's, remain exposed to the fortunes of the dollar. As the needs of China's economy diverge from U.S. monetary policy, its dollar dependence is looking increasingly dangerous, increasing the risk of a wild ride in the Year of the Tiger.

In 1994, when the U.S. Federal Reserve last embarked on a surprise tightening, deteriorating dollar monetary conditions and declines in U.S. Treasury prices triggered bigger problems across emerging markets. This started with the Mexican peso crisis, also known as the Tequila crisis, in 1994 and culminated in the Asian financial crisis of 1997-98.

With the Federal Reserve beginning to tighten monetary conditions for the world's reserve currency, the effects will once again be felt in Asia, and China is a particular concern. The country now faces some difficult choices because it does not have true monetary independence.

The article above is seriously important, especially in the current context of tightening and China woes...

We provided you with a handy lil graphic of the dollar smile, which is firmly embedded into the relationship described in the article...

To reinforce the point of weakness in China, PIMCO has said that Chinese bonds are unfavourable, even on an FX hedged basis...

Tough times lie ahead. Even if the Federal Reserve manages to hike rates without causing a recession in the US, it could still be the final straw that breaks the back of China's struggling economy.

The Fed could fight inflation by killing the housing & stock markets...