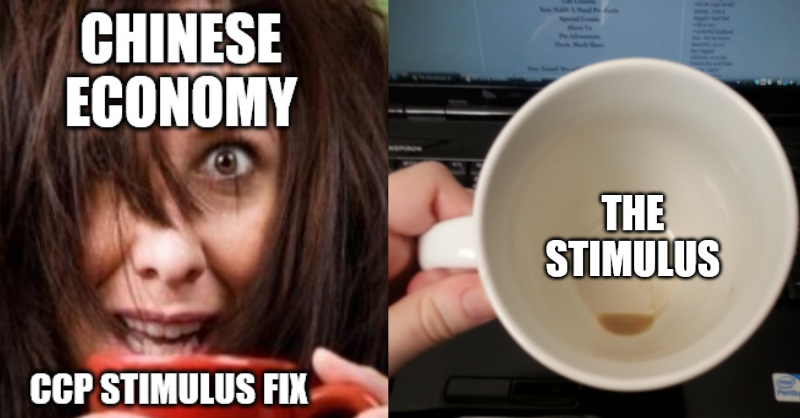 China's economy is in deep deep trouble. It's been on the cards for a while, and the real-world consequences are now starting to bite.

The property market's at the heart of this, so let's start there. In case you missed it, this piece and the embedded articles will bring you up to speed 👇

Now, the world's media has suddenly woken up to the Chinese property market. It's EVERYWHERE 👇

None of this is new, but it's getting renewed coverage because the CCP & PBoC are actually doing something about it. The five year loan prime rate (mortgage reference rate) was cut again this week, which is seen as a sign that policymakers are looking to ease the pressure on the sector. 👇

And it comes just after the launch of 'special loans' to help developers finish projects...

China will offer special loans through policy banks to ensure property projects are delivered to buyers, adding to signs of official support for an industry grappling with a debt crisis and slumping home sales.

...a program that could be worth 200 billion yuan ($29.3 billion), according to people familiar with the discussions

Sounds like a lot of money, but barely touches the sides of the hole in developer balance sheets. Debt restructuring negotiations are well underway 👇

And the bail-ins have started too...

The restructuring process is only just getting started. Who bears the costs?

Obviously some investors will be burned, especially the offshore creditors, but there's also a battle brewing between local governments and Beijing. 👇

The July Politburo meeting, for example, declared that the responsibility for rescuing unfinished housing projects falls on the shoulder of local governments. So we should expect a flurry of local government-designed bailouts over the next few months.

The effectiveness of these local bailouts will determine how Beijing will eventually respond. Yet judging by Zhengzhou’s plan, the provincial capital of Henan with the most unfinished housing projects, it does not appear that local governments are up to the task.

Zhengzhou’s LGFVs are likely in worse shape than the property developers they’re supposed to rescue. For instance, the city government is calling on LGFVs to contribute at least 20 billion yuan ($3 billion) to the bailout fund, but the LGFVs themselves have racked up more than 100 billion yuan ($15 billion) in losses and tripled their debt to more than 700 billion yuan (~$105 billion) since 2015

So, even though you'll see huge numbers doing the rounds over the coming months (and probably years), it all amounts to shifting the losses around the system, rather than any kind of actual stimulus.

These higher unproductive debt loads are more likely to take the form of "anti-stimulus" as capital is diverted away from productive investment and spending.

And even as the cost of capital likely decreases via rate cuts, the shadow banking channels for financing are shrinking...

So, China's economy is reorganising, and it's going to take time.

Many will argue that the huge trade imbalances should be the next point of adjustment. 👇

And it makes complete sense. Much like Brexit, when the relationship stops working, it needs to be readjusted. The choice might be taken out of China's hands in any case. Apple is pointing the way forward with two recent decisions. 👇

Within China, Huawei founder Ren Zhengfei told staff the company must shift its focus from pursuing scale to ensuring profits and cash flow as the global economy enters a long period of recession.

"With survival the main principle, marginal businesses will be shrunken and closed, and the chill will be felt by everyone,"

He also said that "surplus personnel" would be moved to reserve teams, which is surely just a stopgap between employment and unemployment...

Will the new guard be able to face up to the challenges ahead?

Keep calm and carry on? With these energy prices I can't even afford to put the kettle on for a cup of tea Clive. I'm not bloody calm!

Narratives are part and parcel of a dynamic market environment, fuelled by the exchange of information between traders. Some have shorter shelf lives than others...