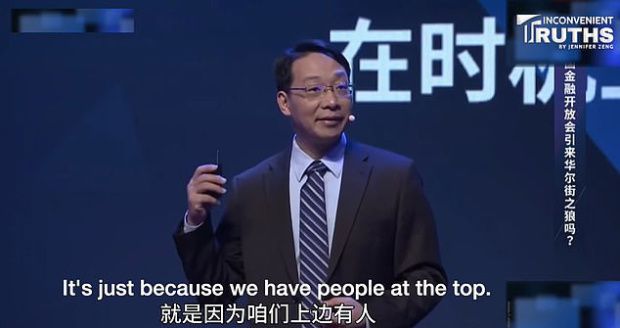 Highly recommend reading the entire thread. Not because anything Dongsheng says is right or wrong. It's more a preview of where the policy debate might shift, potentially worldwide. The talk is incredibly candid and open.

There are a couple of elements I want to focus on

Helicopter Money & The US Exorbitant Privilege

Leave aside the validity of the claim that US toilet paper/helicopter money directly (or uniquely) caused all global inflation. Perceptions matter, and it is widely perceived that the fiscal flood of US stimulus played a major part.

Dongsheng's not a fan of the US dollar as the global reserve currency. During another section of the talk he said:

US needs to agree to a US-China-EU trilaterally negotiated supranational currency indexed to a global basket and a global central bank enforcing balanced trade.
If US declines, China will play for broke and also go MMT.

We'll come back to the MMT. There's been a long-running debate over reserve currency status.
Some commentators have suggested that China wants to become THE reserve currency so they can finally become Thanos, achieve world domination and click their fingers to disappear any who don't comply.

It's absurd. Frankly, why would they even want the responsibility?

The imbalances mentioned here are the root of modern society's issues 👇

If you look at trade patterns over the last decades, the US absorbs 40 to 50% of global excess savings. Interestingly enough, the other Anglophone countries run about half of the remainder, so along with the US, account for roughly two thirds to three quarters of the global trade deficit.

All other rich countries primarily run surpluses, they account for roughly three quarters of global trade surplus. Why are Anglophone countries so different from other rich countries? I believe it’s because they have open, well-governed capital markets, so they attract excess savings.

These are countries that have been running persistent large deficits since the 1970s, which violates our idea of trade.
In trade theory, you can’t run persistent deficits, because they force adjustments that reverse the imbalance. But imbalances persist for decades, so that has to do with capital flows rather than trade flows.

In 2014, another American economist said similar:

“What was once a privilege is now a burden, undermining job growth, pumping up budget and trade deficits and inflating financial bubbles.”

“To get the American economy on track, the government needs to drop its commitment to maintaining the dollar’s reserve-currency status.”

This was (and presumably still is) the view of Jared Bernstein. He's currently serving on President Biden’s Council of Economic Advisers.

If it's such a burden, why does the US maintain the dollar's status as the reserve currency?

Geopolitical influence for one: The US has been able to 'weaponise' the dollar and use the hegemony status to their favour.

Aside from this, the dollar's role in the international trade and monetary system is unrivalled. It would be impossible to abandon before creating a new system to migrate to.

Calls for a move to replace the dollar with the IMF's Special Drawing Rights (or an equivalent) are nothing new either.

France pushed for it back in the '60s and China proposed the same back in 2009.

Needless to say, Dongsheng's on board with the SDR idea, and laid out his opinion in this 2017 paper. 👇

It's hard to disagree that those things have happened. Will the US choose to voluntarily revoke reserve status at some point? That's really the only probable way it changes.

The other question is whether simply changing the composition of the monetary system will remedy those issues.

Don't worry. China's Stephanie Kelton has you covered! And he's already proposed the policy to the CCP...

It basically speaks for itself. Again, for all of the chatter about the US & China being different, they have a lot of similar problems at the societal level. Mainly centred around wealth inequality and a shrinking middle class.

Donsheng went on to say the quiet part out loud...

Presently, in order to prevent political instability, the government and those in control artifically create many meaningless jobs.
We pretend that you have a job so we can pay you a salary so you don't create a ruckus. It's like this across the globe.

(It's not the first time he's said the quiet part out loud either...)

It won't happen though, right? UBI is a fantasy!

Maybe, maybe not. Demographics could be the final push... 👇

That doesn't mean that Dongsheng's entire vision will be realised. It most probably won't. Nor will Kelton's in the US.

Nonetheless, the Overton Window of acceptable policy looks to be shifting in both countries 👇

Although the Overton Window tends to be about left vs right politics in the US, deficit spending is almost bipartisan. The parties tend to disagree more on how the money should be spent, rather than if it should be spent...

Epsilon Theory wrote a piece entitled We're All MMTers Now back in July 2019.It contained this excerpt:

If Trump is reelected in 2020, I think he pushes forward a $2 TRILLION bond issuance that is fully or partially monetized by the Fed.
They’ll be called Infrastructure Bonds.

If a Democrat is elected in 2020, I think she or he pushes forward a $2 TRILLION bond issuance that is fully or partially monetized by the Fed.
They’ll be called Green Bonds.

As it turned out, Covid hit and we got the CARES act instead...

The Coronavirus Aid, Relief, and Economic Security Act, also known as the CARES Act,is a $2.2 trillion economic stimulus bill passed by the 116th U.S. Congress and signed into law by President Donald Trump on March 27, 2020

Followed by the American Rescue Plan in 2021...

The American Rescue Plan Act of 2021 is a $1.9 trillion coronavirus rescue package designed to facilitate the United States’ recovery from the devastating economic and health effects of the COVID-19 pandemic.

Yes, Covid does mean there are mitigating circumstances, but now that they've done this once or twice, why not respond the same way in the next downturn?

Anf then again to try and prevent the next downturn?

And then again to be popular and get re-elected... It goes on.

All at a time when crypto = monetary innovation in overdrive, trust in public institutions is fading fast, and the next generation is starting to wield the baton of voting power. May we always live in such interesting times...

I've compiled the Twitter thread into this pdf so it's easier to read.

🔔 Who Can Stop Disney From Taking Over The World?

Disney will take over the world. Who's going to stop them? Netflix? Pffffttt!

🔔 Big Tech Need To Cough Up

EU Telecoms giants want big tech firms to pay their way... Will they get their wish?